Please ensure Javascript is enabled for purposes of website accessibility
Log In Help Join The Motley Fool
Free Article Join Over 1 Million Premium Members And Get More In-Depth Stock Guidance and Research
By Rich Duprey - Feb 8, 2020 at 8:17AM

Competition may get a jumpstart on the motorcycle maker's ambitions.

That electric bicycle you briefly saw Bill Murray riding on with a groundhog during the Jeep Super Bowl commercial last weekend is real, and Fiat Chrysler Automobiles (FCAU) will begin selling them this June.

While the e-bike has already begun to generate some industry buzz, it also should be a warning to Harley-Davidson (HOG -0.28%), because it reveals a flaw in Harley's plan to go all-in on electric vehicles (EVs).

Muscling into the market

According to electric vehicle industry site Electrek, the e-bike is so massively powerful that it should fully live up to its billing as the "most capable off-road electric mountain bike there is."

Although Jeep says it comes with a 750-watt electric motor, that apparently undersells the power it offers: It seems the motor is actually one built by Chinese motor manufacturer Bafang called the M620, which is a powerhouse that actually puts out at least 1,600 watts of peak power when equipped with a standard 52-volt battery and generates 160 Newton meters of torque.

While that kind of geek-speak is above my pay grade, I'm sufficiently impressed that Electrek believes "that's an insane amount of torque -- a level that most gas motorcycles don't reach."(emphasis in original) 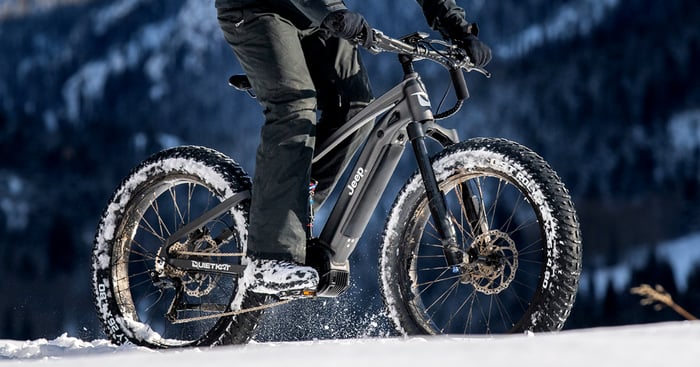 Even if, as other sites believe, the Jeep e-bike's production motor is closer to the specs provided simply for rider safety, it still challenges Harley-Davidson's belief that its LiveWire electric motorcycle can effectively serve as a "halo" product to sell the other EVs it plans to produce.

Shining a light on strategy

Harley has justified the $30,000 price tag of the LiveWire, which in comparison produces some 116 Newton meters of torque, by saying it shows what the bike maker can do when it puts its energy and financial resources toward building the market's premier electric motorcycle.

Although it agrees it might not sell many LiveWires, Harley says the bike will bring customers into its dealer showrooms who will then buy the electric scooters and bicycles it will produce.

The problem is that Harley never seemed to factor in competition beyond existing electric bike manufacturers. Now it has other, bigger competitors entering the market who are ready to hit the ground running.

Competition is revving up

Fiat Chrysler's Jeep is just one automobile manufacturer that's producing electric bicycles. Last year General Motors (GM -1.99%) began selling two e-bikes, the Meld and the Merge, under its ARIV brand (pronounced "arrive"), though initially they are only for sale in Belgium, Germany, and the Netherlands. Ford (F -2.72%) was actually one of the earliest automakers to get into the e-bike market, introducing its Supercruiser in 2013, but it's no longer in production.

Harley-Davidson also has little street credibility with the consumers who are most likely to buy electric bikes. Because its legacy is in combustion engines, convincing buyers it is now committed to an electric future rather than just trying to ride the latest trend may be difficult. While that arguably applies to the carmakers, too, they've established themselves in the EV market (though not Fiat Chrysler, which has yet to produce an electric car of its own).

Harley's quarterly earnings indicated sales for the LiveWire were lower than anticipated, in part due to manufacturing problems it discovered as the motorcycles were rolling off the assembly line.

Out of an abundance of caution, it chose to hold up production to fix them, but the delay meant Harley had missed the seasonal buying window by the time they hit dealer showrooms. Of course, the exorbitant price tag has already narrowed the field of potential buyers considerably.

Also, leaked internal documents seen by Electrek cast further doubt on Harley's e-bike ambitions. They suggest Harley will only be pursuing a Class 1 pedal-assist e-bicycle because they represent 88% of the global e-bike market.

Like the LiveWire, the motorcycle maker may price itself out of the market and find the competitive hurdles of the electric vehicle market much too high to surmount.