In particular, the networking technology company detailed the travails of not only navigating heavy promotions during the crucial holiday period, but also defending its market share in the increasingly competitive space.

Let's take a closer look at how Netgear ended 2019, beginning with its headline numbers for the fourth quarter:

While Netgear's top-line decline certainly doesn't look encouraging, revenue technically arrived near the high end of guidance provided in October, which called for a range of $240 million to $255 million.

On the bottom line, we should also note that the above GAAP results include the impact of items like stock-based compensation and restructuring charges. Excluding those items, Netgear's adjusted (non-GAAP) earnings were $0.34 per share, down from $0.68 per share a year ago, but also above Wall Street's consensus estimates for adjusted earnings of $0.29 per share. 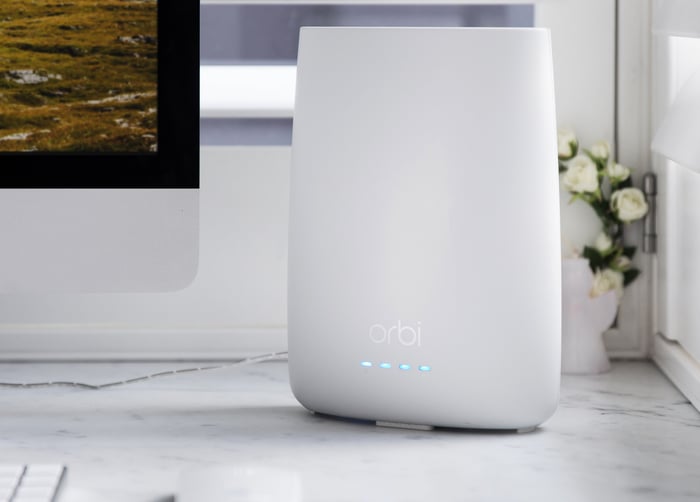 Revenue from Netgear's connected home segment (including its Nighthawk and Orbi networking products) declined 14.7% year over year to $183.9 million -- partly spurred by a 22% decline in connected home sales (to $29.7 million) to service-provider customers. Meanwhile, revenue from the small and medium business solutions (SMB) segment declined 5.7% to $69.1 million.

While we experienced a heavily promotional holiday season, we proceeded as planned by participating competitively in the WiFi 5 market while aggressively shifting our channel to WiFi 6 products. During the promotional period, we took advantage of incremental opportunities to gain share, thus leading to slightly higher revenue and lower non-GAAP operating margin. We also took initial steps to adjust inventory in the channel to facilitate our continuing shift to WiFi 6 and Power over Ethernet Plus. We will advance the same strategy in the first half of 2020 and expect WiFi 6 and Power over Ethernet Plus to constitute the majority of the markets in which they play in the second half of this year.

Lo also revealed Netgear's base of registered users grew to 12.8 million (from 12 million three months earlier) at the end of the year, while registered app users jumped to 4.4 million (from 3.6 million last quarter).

"The growth of these users serves as the foundation for growing our paid subscriber base, which has increased to 177,000 by the end of the fourth quarter," Lo added. "We will continue to execute our strategy and drive initiatives to extend this momentum in 2020."

On that light outlook

For the first quarter of 2020, Netgear expects revenue will arrive in the range of $205 million to $220 million, down roughly 13% year over year at the midpoint and well below analysts' consensus estimates for a more modest 9.7% decline. As a consequence of losing this top-line leverage, Netgear also expects adjusted operating margin will contract to a range of 2% to 3%, down sequentially from 4.4% in the fourth quarter and from 6.5% for all of 2019.

Netgear CFO Bryan Murray blames this underwhelming start to the year on a combination of moves to rebalance inventory toward WiFi 6 products, and lower service-provider shipments as carriers wait for new 5G products to hit the market.

Of course, Netgear's decision to defend its market share by embracing promotions should leave it well-positioned to benefit as 5G products arrive and WiFi 6 industry trends continue to gain steam. But until investors see more concrete signs of those benefits, I suspect this promising tech stock will remain under pressure.