Please ensure Javascript is enabled for purposes of website accessibility
Log In Help Join The Motley Fool
Free Article Join Over 1 Million Premium Members And Get More In-Depth Stock Guidance and Research
By Brian Withers - Feb 9, 2020 at 9:15AM

Last year was a great year for stocks, with the S&P 500 gaining 31.5%. But that number represents the total gain of the top 500 market cap stocks in the U.S., so some stocks did even better. If you were lucky enough to own Shopify (SHOP 5.47%), Universal Display (OLED 3.15%), or Paycom Software (PAYC 2.48%) last year, these stocks would have doubled your money. 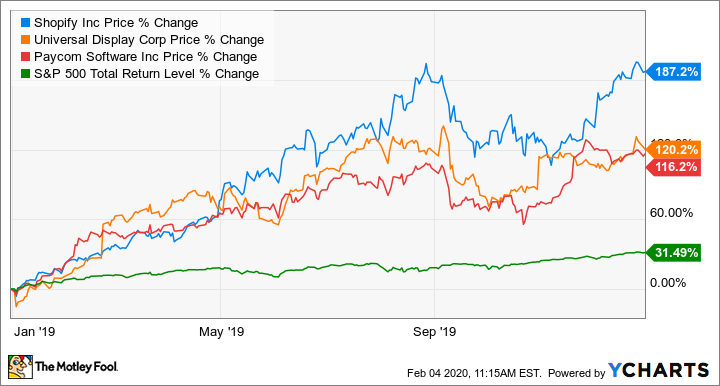 Let's dive in to learn more about this trio and determine whether their market-beating returns can continue.

Starting a business is hard. Keeping it running can be even harder. Shopify makes it easier for those business owners who want to sell products online. With a subscription of only $29 per month, businesses can build an online store, add products, get access to discounted shipping, and collect payments from customers. The company makes money from subscription fees, and shares in the success when merchants sell their goods. It captures a small part of every sale through payment processing fees or shipping services. More than a million merchants use its platform today.

Shopify has been on a roll. In each of its earnings reports in 2019, revenue growth exceeded 45%, bringing its annual revenue run rate to $1.4 billion. The company is foregoing profits to invest in growth, including platform improvements, international expansion, acquisitions, and a fulfillment network. Even though the stock has more than doubled in the past year, it isn't done growing. With tailwinds of e-commerce growth and an ever-expanding platform, Shopify can still be a solid investment for investors who have a long-term perspective. 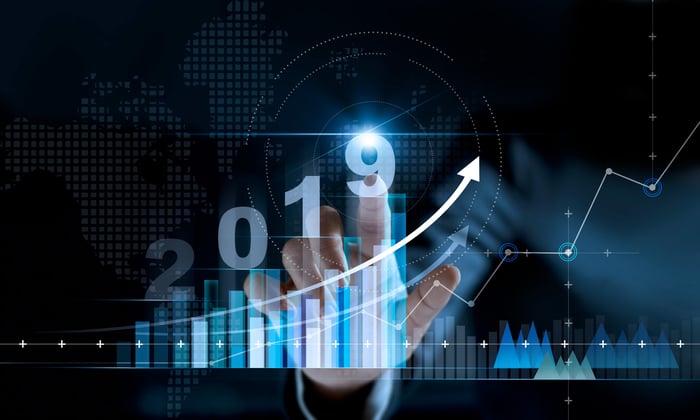 Universal Display: Technology for the next wave of screens

In the 1967 film The Graduate, there's a scene where Mr. McGuire, played by Walter Brooke, pulls the young graduate, played by Dustin Hoffman, aside to give him "one word" of advice for his career. If the movie were shot today, that one word wouldn't be "plastics," it would be "OLEDs." Just as Hoffman's character was left confused, you might be wondering what OLED means. It's an acronym that stands for Organic Light Emitting Diode and is the technology behind high-end screens for Google Pixel 4 phones, Sony Brava televisions, Dell XPS laptops, and Apple's Series 5 Watch. The market for this technology is in its infancy and Universal Display is poised to benefit.

Universal Display developed OLED technology and owns over 5,000 patents related to its use and application. It also sells base materials to manufacturers to enable these screens to come to life. OLEDs are superior in many ways to the more common, but older LCDs (liquid crystal displays). They are lighter, brighter, more colorful, can be made into flexible screens, and use less power. This past year has been a banner year for the company, as its revenue for the first nine months of 2019 grew 71% over the same period in 2018 and is projected to be between $400 million and $410 million for the full year. The market for OLEDs is expected to double from 2019 to 2023 and can be a great way for investors to play this technology trend as OLED screens become more commonplace.

With unemployment at 50-year lows, it's important for companies to have the proper tools for managing their employee base, and that's where Paycom's human capital management (HCM) software comes in. The company started in 1998 with a software product to handle payroll and has since expanded into a full suite for human resource management. Focused on small companies with less than 5,000 employees, its cloud software tracks the full lifecycle of employment, including hiring, performance goals and reviews, human resources (HR) tasks, time management (managing schedules and vacations), and payroll. Its direct access features for employees free up HR professionals from manual data entry tasks, saving money for employers and allowing the HR team to focus on strategy.

The company makes money from its monthly subscription fees, which account for 98% of its revenue. Revenue growth has been around 30% for its last eight quarters (ranging between 28.7% and 31.8%), with its most recent quarter notching up 28.7% year-over-year growth. Unlike many other growth companies, it's profitable and growing its bottom line. The most recent quarter saw a 45% growth in net income and 32% growth for the full-year 2019. No doubt these impressive performance numbers drove the stock gains in 2019.

Its research and development investments go to improving the platform in three key areas: compliance (keeping up with regulations), improving current tools, and creating new tools and features. These investments are paying off as it has seen high annual retention rates in the 90%-plus range for the past four years. With an addressable market of $20 billion, its $738 million in trailing-twelve-month revenues represent less than 4% of its potential, giving the company plenty of room for growth ahead.

You might think that with these incredible gains, you've missed the boat on these growth stocks, but that's not the case. Each of these companies operates in a huge market and has built a strong business to capitalize. Motley Fool co-founder David Gardner likes to invest in winners like these because "winners tend to keep on winning." That could certainly be the case for this bunch.