Please ensure Javascript is enabled for purposes of website accessibility
Log In Help Join The Motley Fool
Free Article Join Over 1 Million Premium Members And Get More In-Depth Stock Guidance and Research
By Rich Smith - Feb 9, 2020 at 11:20AM

SpaceX's Starship could make colonizing Mars possible. And even here on Earth, it could make SpaceX the dominant space company for decades.

In a world of big-thinking tech CEOs, Elon Musk thinks bigger than most.

Seemingly single-handedly, Musk first pioneered and then advanced the acceptance of electric cars as mass-market vehicles, solar power as an alternative to oil, and ... the possibility that Mars could be colonized.

But as revolutionary as all those ideas may sound, it's Elon Musk's plans for his space company SpaceX that could be the real earth-shaker. 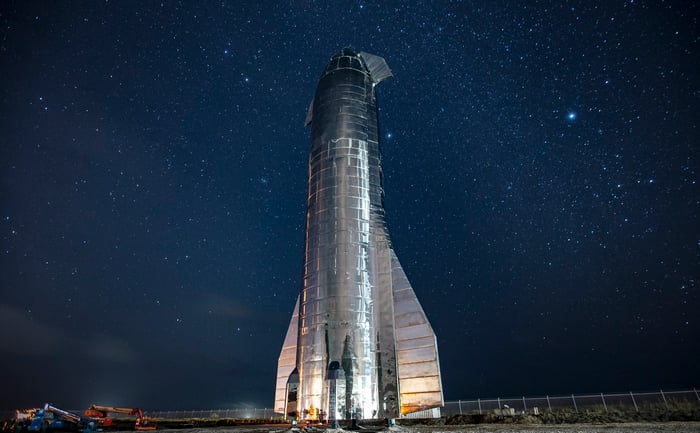 Remember Starship? This is a song about Starship

Specifically, his plans for the new "Starship" spacecraft that SpaceX is currently developing.

To refresh your memory, Starship is the new working title for the reusable rocket that SpaceX once called "BFR," and that it plans to test-fly later this year. It's designed to be built in two parts: Starship proper, which will carry up to 100 passengers, 100 tons of cargo, or a combination of the two, will stand 160 feet tall and have a diameter of 30 feet. Equipped with six Raptor engines, Starship will be able to launch from, land on, and travel between planets with low gravity -- even landing back on Earth.

Combined with Starship, the combined vessel will stand 20 feet taller than the Saturn V.

In a series of tweets published across Twitter last month, Musk laid out some big numbers for what he expects Starship to accomplish in the coming months and years.

Now, to be clear, Starship hasn't even launched yet, although an "MK1" version was assembled and stood up at SpaceX's Boca Chica, Texas, test site, and abbreviated versions of the craft dubbed "Starhoppers" have taken short "hop" test flights. But overlooking that minor detail, in January Musk tweeted out his hope that SpaceX will eventually be building as many as 100 reusable Starships per year, building toward a fleet numbering 1,000 Starships or more.

Now, if you read the rest of that tweet, you know that Musk also predicted that each of these reusable Starships will be designed to accomplish three flights to orbit (and back) per day on average, carrying up to 100 tons of cargo on each trip. The idea is to rapidly shuttle cargo from Earth to Earth orbit, there to be loaded aboard other Starships that will eventually travel from Earth to Mars caravan-style.

Thus, many of the Starships Musk wants to build will be parked in orbit, accepting and stowing away cargo from the shuttles flying to and fro beneath them, preparing for the day when the caravan departs Earth. The actual shuttling of cargo will be done by 10 or so workhorse Starships. (And about 10 years after all this begins, in what's sure to be one heck of a fireworks display, 1,000 Starships may launch over a period of just a few days, carrying up to 100,000 colonists who will accompany the supplies on a trip to colonize Mars.)

What it means in the meantime

Let's put a pin in that Mars idea, though, which seems so ambitious that even tech fans like CNET say getting all the moving parts to work would verge on the "miraculous."

100 Starships built per year. To wrap your head around how astounding that prediction is, last year every country on Earth, combined, built and launched only 103 rockets -- none anywhere near as big as Starship, and none, except those built by SpaceX, reusable.

Starships flying three times per day. Most space companies today (which is to say everyone other than SpaceX) build their rockets and throw them away after just one use.

Three flights per day ... for 20 to 30 years. In one final tweet, Musk revealed that SpaceX is designing Starship to have a 20- to 30-year lifespan -- "like aircraft."

Not to put too fine a point on it, but if even a fraction of what Musk is promising comes to pass, SpaceX is soon going to be entirely in a class by itself. With its operating costs reduced to essentially the cost of refueling his spaceships, "changing the oil, and rotating the tires" after each launch -- while everyone SpaceX is competing against has to build an entirely new spaceship for each and every launch -- no other company on Earth is going to be able to come close to competing with SpaceX on price.

So whether the future for SpaceX is "Mars colonization" or supplying a moon base for NASA, putting satellites into orbit cheaper, or even transporting people and cargo by rocketship from point to point on Earth, this company's costs are going to be pennies on the dollar compared to what everyone else has to charge.

If I were CEO of a company that competes with SpaceX today -- or of one even contemplating competing with SpaceX on any of these endeavors in the future -- right now, I'd be very nervous indeed.