If we look at the sportswear company through the famed investor's turnaround framework, we can see it still has a lot going for it.

Under Armour (UA -2.33%) (UAA -1.91%) was a huge hit among athletes and investors alike in its first decade on the public markets. It had popular, innovative products and prominent celebrity endorsement deals. Founder and chief executive Kevin Plank wasn't shy about his plans to take on athletic giant Nike.

But then it started to fall off the pace. Under Armour lost ground in the U.S. marketplace, executive turnover began to take a toll, and sales and margins suffered.

Despite the company's problems -- and its falling stock price -- it still has a strong brand to build on and a promising plan to get back in the game. But it's true that investing in Under Armour today doesn't present the same kind of investing opportunity it did a decade ago. So what kind of investment is it?

Peter Lynch, the famed former head of the Fidelity Magellan Fund, outlined a few ways to look at stocks in his classic One Up on Wall Street. One was the turnaround: a company that's fallen on hard times but has a plan to get back up. Let's go through his framework and see if Under Armour fits the bill. 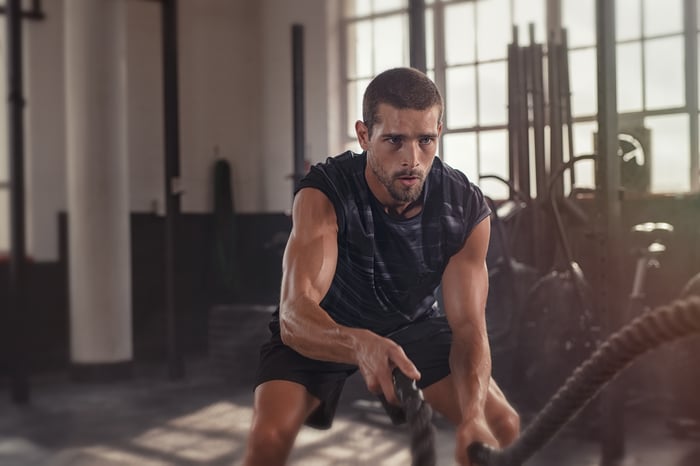 The first factor to check is whether or not a company can hold off creditors while it tries to shape up. If it's losing money, creditors may be able to come in and dismantle it before it can finish getting its act together.

Under Armour is not in a cash-compromised position. Cash and cash equivalents rose 147% year over year in the company's third quarter, reaching $417 million. At the same time, long-term debt decreased 26% to $592 million. (Under Armour is expected to release fourth-quarter earnings on Tuesday.)

Does the company have a plan?

Under Armour's famous motto "Protect This House" could be restated these days as "protect the brand." It's doing this by decreasing sales to off-price stores that have diluted the brand status. This was part of the reason for the past quarter's lowered revenue, and I think it's a reasonable case of short-term loss to benefit a long-term gain.

CFO Dave Bergman asserted in the third-quarter earnings call that "we will continue to balance key long-term strategic investments with a disciplined commitment to driving operating margin rate improvement." Putting new CEO Patrik Frisk into the leading role is another move in the right direction. The company also ramped up marketing efforts to hone its branding.

Most important, Under Armour is also reinvesting in the technology that originally brought it to prominence, with the addition of its HOVR shoes and Rush and Recover apparel to its lineup. The company got started with a radical technological innovation as opposed to a style ethic; that's what the company is best at and loved most for.

While the style pundits scream that Under Armour has to get with the times and go for the athleisure look, the Under Armour fans wear it as the very foundation of athleisure -- wearing pure athletic wear as casual wear, as opposed to the "stylish" athletic wear sold by competitors such as Nike and Lululemon Athletica. Straight from the gym to the supermarket.

The athleisure market is huge, as evidenced by the success of the aforementioned brands. Under Armour can take a chunk of it if it pulls itself together.

Are there signs of a resurgence?

This one is more iffy. International sales grew 5% in the third quarter, but U.S. sales decreased 4%. The company said that was in line with expectations and partially due to the lower off-price sales. It also saw a slight rise in full-price sales, which is a glimmer of the direction it wants to move in. But the company is definitely not in growth mode just yet.

I compared Under Armour with three of its competitors in November, and Under Armour came in with the slowest growth and the worst stock performance for 2019. It also has the highest price-to-earnings ratio today around 82, so it's hard to call it undervalued.

However, the potential for a turnaround is pretty robust. A federal investigation into the company's accounting practices hasn't torn it down, and international expansion is still showing high growth, with a 9% increase in the 2019 third quarter.

Is the company cutting costs?

Selling, general and administrative expenses in the third quarter increased 4% to $551 million, which was better than expected. Gross margin increased 220 basis points year over year -- or 2.2 percentage points -- to 48.3%. Some of this was related to cost-management efforts, some to prior restructuring that paid off in this quarter, and some to favorable pricing and lowered freight expenses. And the company is willing to cut its losses, such as recently shutting down an expensive fitness app that has been losing money for the past two years.

Bergman noted that "our efforts to create greater efficiency, agility and leveraging our cost structure remains a key priority and focus for our company," although greater specifics were not announced.

Under Armour is releasing its fourth-quarter earnings report this Tuesday, and we'll be able to see it it's come through further on its objectives.