Boeing, Fastenal, and Parker-Hannifin will offer clues as to the growth potential of the industrial sector in the second half of 2020.

There are two really big questions that investors in the industrial sector are asking themselves right now, and they both relate to the second half of 2020. The first is whether there's any validity in the thesis that there will be a recovery in the industrial economy in the second half. That idea has been tossed out there by several management teams so far this year. On a related note, the second question is when exactly the Boeing (BA -4.95%) 737 MAX will return to service (RTS). Let's take a look at what these questions mean and what stocks you should follow to try and find the answers. 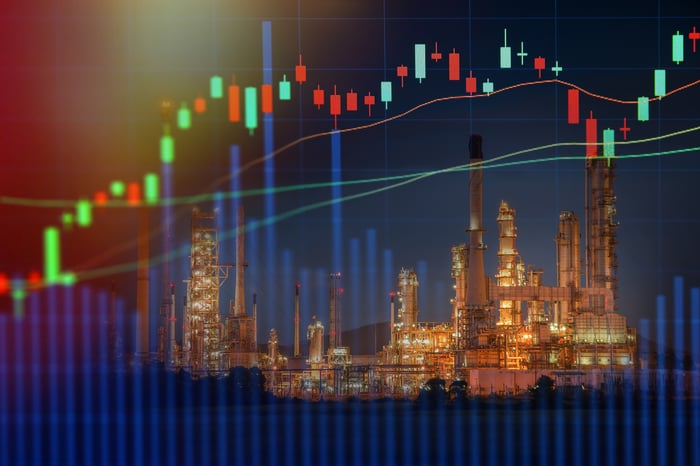 If you want an early read on the industrial economy, then it makes sense to keep an eye on industrial supply companies like Fastenal (FAST -3.66%) and the outlook statements made by highly cyclical companies like motion and control company Parker-Hannifin (PH -3.34%). Fortunately, both have given some relatively good news recently.

Before getting into the details, it would be remiss not to mention that the second-half recovery thesis received a boost recently, with the latest data from the purchasing manager index (PMI) data from the Institute for Supply Management -- the most widely followed data set in the industry. A reading above 50 indicates expansion in the industrial economy. As you can see below, the January reading was the first above 50 since July 2019, and the new orders component came in positive too. 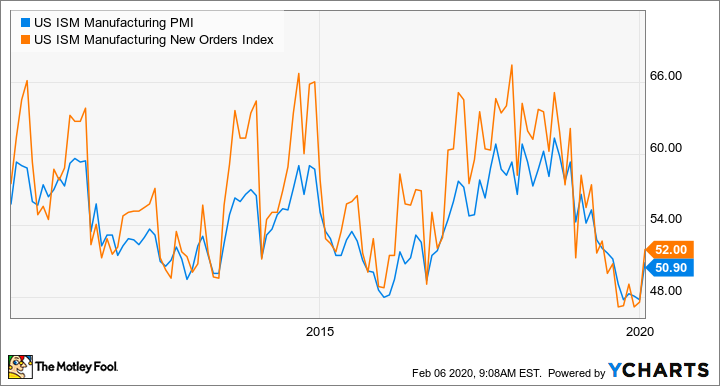 Turning back to Fastenal, it appears that its January sales came in better than its CEO had expected they would be just a few weeks ago. On the first-quarter earnings call in the middle of January, CEO Daniel Florness broke his habit of not giving commentary on trading within the month by saying: "I expect at this point, January will feel a lot like December. I don't know, if that means it will be 1%, but I think, it's going to feel like December did."

Moreover, there was a nice uptick in both its manufacturing and construction end-market sales. 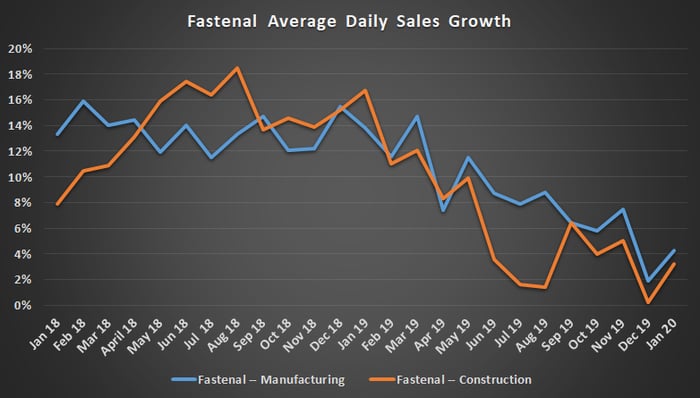 Finally, its average daily sales growth rate (October to January period) was only slightly worse than its benchmark historical five-year average in spite of two relatively weak months in October and December. 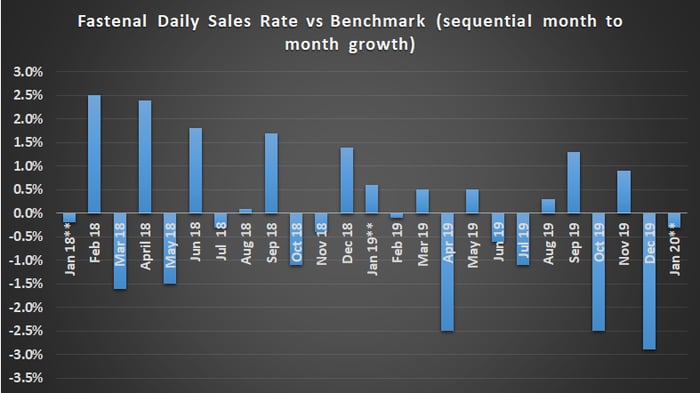 Data source: Fastenal. **For January, Fastenal reports October to January data. All other months are sequential.

In November some commentators got excited by Parker-Hannifin's guidance and the fact that it implied a bottoming of its sales trend "somewhere between Q2 and Q3 in this guidance" according to CEO Thomas Williams.

Unfortunately, the grounding of the 737 MAX and the production slowdown by Boeing has caused Parker-Hannifin to cut its guidance for the second half of 2020, but on the second-quarter earnings call Williams maintained that "-- in our guidance, we're reflecting really Q3 is kind of our bottom from what we see at this point." Since Parker-Hannifin's guidance doesn't include any additional sales from the 737 MAX, there's arguably some upside potential from a timely 737 MAX RTS.

All told, the coming third quarter is likely to be another difficult one for Parker-Hannifin, but the outlook should be for a relative improvement in its fourth quarter -- a quarter which will coincide with most other companies' third quarter of 2020.

The airplane is intended to be, alongside the Airbus A320 NEO, the workhorse of the commercial aviation industry. It's such an integral part of the U.S. industrial economy that companies as diverse as paintings and coatings company PPG, industrial supplier MSC Industrial, and the usual suspects such as top stocks like General Electric and United Technologies have all had to adjust their near-term outlooks because of its ongoing grounding.

Moreover, there's also the risk that a protracted delay in the RTS could cause some supply chain gremlins to creep in and significantly affect the industrial sector. For example, jobs are also being lost in an industry where skills aren't easy to come by.

Boeing expects the plane will be ungrounded in midyear 2020, and industrial companies are keying off that outlook, but the Federal Aviation Administration (FAA) is believed to be open to a RTS sooner than Boeing's estimate. Such an event would provide a much-needed boost to the U.S. economy. It's definitely a watch item.