Please ensure Javascript is enabled for purposes of website accessibility
Log In Help Join The Motley Fool
Free Article Join Over 1 Million Premium Members And Get More In-Depth Stock Guidance and Research
By Donna Fuscaldo - Feb 12, 2020 at 8:31AM

When building an investment portfolio, you want exposure to growth, income, and safety. Five Below, Apple, and Chubb give investors that.

Diversification is key for any type of investor when building a portfolio. If the investments are too concentrated in one area, the losses could be greater than if the exposure was spread out.

For example, investors who have all their money in Chinese stocks trading in the U.S. are feeling pain these days as cities across China go into quarantine due to the coronavirus, curbing manufacturing, and commerce. But if the same investors had their investments spread out, the hit to the portfolio wouldn't be so steep.

There are several ways to build a diversified investment portfolio, but for those looking for growth, income, and a little safety, here are some stocks worth considering: Five Below (FIVE -3.41%), Apple (AAPL -1.07%), and Chubb (NYSE: CB). 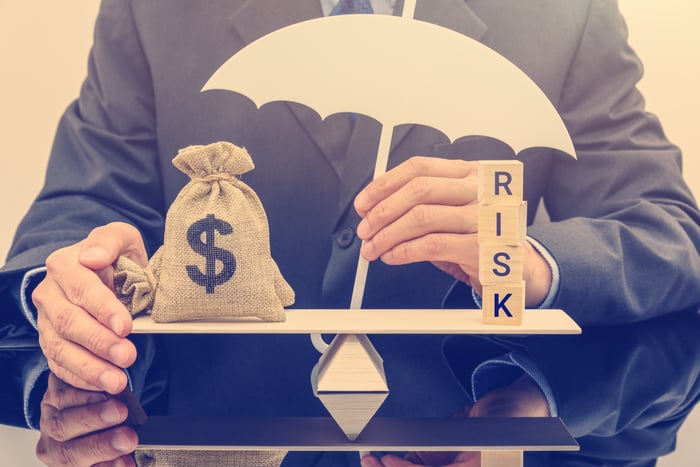 Five Below is a growth stock after all

Thanks to Amazon's impact on the retail market, traditional retailers aren't usually among growth stocks. Many are shuttering stores and laying off workers. But one physical retailer that's actually in growth mode is Five Below, the discount retailer that caters to tweens, teens, and college students with items priced at $5 and under.

For its fiscal third quarter, which Five Below reported in November, sales increased 20.7% year over year to $377.4 million. It opened 61 new stores during the quarter and now has 894 stores in 36 states, marking a 20% increase from the third quarter of fiscal 2018.

As for the holiday period, Five Below said net sales from Nov. 3 through Jan. 4 increased 13.4%, but comparable sales decreased by 2.6%. The company blamed it on six fewer shopping days during the 2019 holiday period. The decline in comparable sales is not stopping it from opening even more stores in 2020. Five Below announced 180 planned new stores during the year. It intends to incorporate Ten Below zones in most of the new stores. The zones are home to merchandise that sells for as much as $10, including iPhone, iPad, and gaming accessories and Bluetooth devices. Ten Below zones are already in 25 stores and are resonating with customers.

The retailer also has a deepening relationship with Disney, enabling it to access merchandise that other retailers aren't hawking. With Frozen 2 a smash hit, the relationship should drive store traffic and thus more sales. Five Below also provides investors with a bit of safety if a recession ensues. People will seek out bargains, which happen to abound at Five Below.

Analysts on average expect the retailer to grow revenue 18.8% this year and 20.7% in 2021. That implies 20% upside, not so shabby for a physical retailer.

Apple gives you tech exposure without the risk

With a market capitalization of $1.4 trillion, Apple is one of the most valuable companies in the world. For good reason -- it keeps churning out products and services that resonate with the masses, and it has a boatload of cash in its coffers. It also provides investors with a safe way to play the technology market given its stable earnings and revenue growth. There's a reason Warren Buffett's Berkshire Hathaway is Apple's second-largest shareholder. It's also notably Berkshire Hathaway's largest holding, making up about one-quarter of the company's equities portfolio.

Building a portfolio around Apple makes a lot of sense given its leadership position in the mobile and computing markets. Its iPhone and iPad are used by billions of people, as is its software and services. Apple isn't one to rest on its laurels, either, investing roughly 5% of its revenue in research and development. But beyond its ability to churn out hits, Apple has a loyal audience of consumers that transcends the iPhone and iPad. That almost guarantees it will be able to grow in the years to come.

For its fiscal 2020 first quarter, Apple reported earnings and revenue that blew past Wall Street estimates. It marked the highest quarterly revenue for the iPhone maker and was driven by strong demand for its iPhone 11 and iPhone 11 Pro models.

With Chubb, you get income and growth

Income-seeking retirees aren't the only ones who should include dividend stocks in their portfolio. Anyone who is building an investment strategy should own income-producing stocks. Not only do dividend-paying companies give you income, but if they're increasing the payout, it means operations are stable and humming along. What company is going to raise its dividend when cash is tight?

Not all dividend stocks are the same, however. There are the haves and have nots. Chubb falls in the haves category.

The property and casualty insurance company may have a stock that is underperforming in 2020, but it also has an increasing dividend and business prospects that should please investors. Chubb has increased its dividend for 26-years in a row, with the most recent increase happening in February 2019.

The insurance company's dividend yield is 1.8%, and it has a payout ratio of 27.2%, which implies there's room for growth.

On the business side of things, for its fourth quarter, which it just reported, Chubb posted earnings and revenue that beat Wall Street views. It marks the fourth consecutive quarter Chubb has been able to beat Wall Street expectations. Driving the results were lower catastrophe losses and strong growth in premiums. The insurance provider saw its strongest organic growth in premiums in more than five years. Looking out to the full year, the insurance company expects profit to rise 12.4%, saying it started the year in "excellent shape."