Please ensure Javascript is enabled for purposes of website accessibility
Log In Help Join The Motley Fool
Free Article Join Over 1 Million Premium Members And Get More In-Depth Stock Guidance and Research
By John Ballard - Feb 12, 2020 at 9:05AM

The "Donkey Kong" maker wants to add some fun to air travel, and pad its sales in the process.

Everyone could use a smile while going through TSA security. Nintendo  (NTDOY 1.94%) has a solution, at least for the short term.

The Japanese game maker will open Nintendo Switch On The Go pop-up lounges this month at select U.S. airports. On Feb. 17, pop-ups are currently scheduled to open at Dulles International (Washington D.C.), Tacoma International (Seattle), and O'Hare International (Chicago). A pop-up will open at Dallas Love Field on Feb. 13. However, these lounges will remain open only until late March. 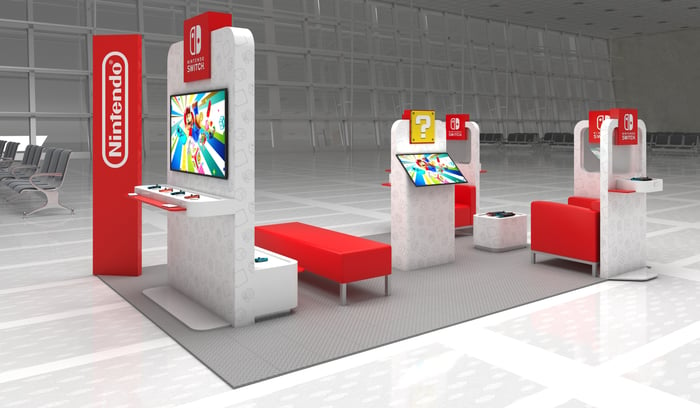 The pop-ups will offer charging ports and playable Switch demos in both handheld and TV mode. Some of Nintendo's most popular games will be available, including The Legend of Zelda: Breath of the Wild, Mario Kart 8 Deluxe, and Super Mario Odyssey.

Nintendo should be able to generate some extra sales from this effort. Travelers who stop by will be treated to a free Switch-branded luggage handle wrap and a $10 coupon to use at Target on a Nintendo purchase of $75 or more. Visitors will also be able to place orders for Switch, Switch Lite, and a selection of games and merchandise.

What is Nintendo thinking?

The Switch installed base stood at 48 million in December, with unit sell-through for the April-to-December period up 16% year over year in North America.

To keep that growth going, Nintendo is starting to open physical locations, such as a company-owned store in Tokyo, in addition to a partnership with Universal Parks & Resorts, where Super Nintendo World is currently under construction. The airport lounges are just a small part of this broader strategy to build brand awareness.