Please ensure Javascript is enabled for purposes of website accessibility
Log In Help Join The Motley Fool
Free Article Join Over 1 Million Premium Members And Get More In-Depth Stock Guidance and Research
By Alex Planes - Feb 13, 2020 at 9:33AM

REALiTi made while u wait pic.twitter.com/jWRPAEufs8

Wait, no, sorry. That's just Elon being Elon on Twitter, as usual.

The CEO of SpaceX had an extremely active day on Twitter on Feb. 6, tweeting about several things, including the silly sci-fi pulp magazine cover. But one thing he didn't tweet about that day -- which would've been of far greater interest to investors everywhere -- was SpaceX's announcement that it might someday spin off its Starlink satellite division.

A Starlink IPO would finally give investors a second way to invest in the unique genius of Elon Musk, while also expanding the rather limited opportunities currently available for investing in space-centric companies.

A sidequest on Elon Musk's mission to Mars

SpaceX is currently valued at roughly $33 billion on private markets, up from about $30.5 billion last year. However, Musk has been far more adamant about keeping his rockets away from Wall Street than he was with Tesla (TSLA -0.32%), which went public in 2010 at a market cap of roughly $2.2 billion, or SolarCity, which reached a market cap of nearly $1 billion after its 2012 IPO (SolarCity is now part of Tesla).

If SpaceX ever does go public, its valuation will likely be much higher than that $33 billion estimate. Musk has made clear that he doesn't want to IPO SpaceX until it has established a steady stream of crewed routes to Mars. A SpaceX that could make a Mars trip feel more like a JFK-to-Dulles shuttle flight could easily be worth more than Tesla is today, all before ever going public. But it also implies that SpaceX will be well established by the time it might IPO.

Starlink, on the other hand, has a lot of runway left.

Musk said he plans to launch anywhere from 12,000 to 42,000 Starlink satellites to create an orbiting scaffold of internet connectivity. No specific timeline was given for reaching this goal. There are perhaps 200 to 240 Starlink satellites now in orbit, and the FCC has already given Starlink a deadline of November 2027 to launch the "first" 12,000 of Musk's grand plan. If Starlink reaches Musk's stated targets, it would represent an increase of anywhere from 4,900% to 20,900% in the number of near-Earth internet hotspots under its control. That's a lot of growth potential. 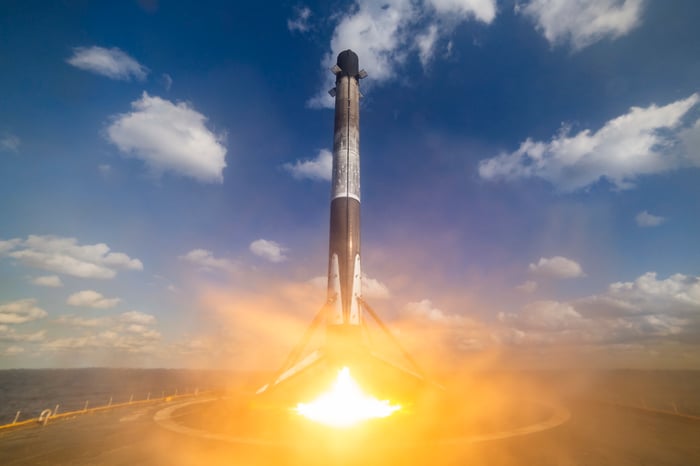 There are currently two major publicly traded satellite internet providers: EchoStar's (SATS 1.36%) HughesNet and ViaSat (VSAT -1.58%). HughesNet caps subscriber data access at 50 gigabytes per month, at a cost of over $120 per month, according to BroadbandNow. ViaSat has an "unlimited-bandwidth" plan, but it costs $150 per month, and your download speed gets throttled after using about 100 gigabytes of data.

Between them, these two providers serve about 2 million subscribers with 13 orbiting satellites. Every SpaceX-Starlink launch places several times as many satellites into orbit as the combined fleets of EchoStar and ViaSat.

My god, it's full of satellites

Other companies are planning to similarly seed the skies with bandwidth-beaming satellites in the near future.

OneWeb is part-owned by Softbank and operating a joint venture manufacturing subsidiary with Airbus called OneWeb Satellites. The company plans to put about 382 satellites into orbit by the end of 2020, according to Foolish aerospace specialist Rich Smith.

Amazon.com (AMZN -2.78%) has its own satellite broadband venture, Project Kuiper, with ambitions to connect most of the world with a network of 3,236 satellites.

Neither of these competitors seems to offer the same opportunities as a publicly traded Starlink. OneWeb offers, at best, limited and indirect opportunities to invest in its space race efforts. Amazon is likely to track Project Kuiper as just another line item on its expansive earnings reports.

Neither of these Starlink competitors has access to a dedicated fleet of launch rockets. SpaceX, on the other hand, has enough payload capacity that it's invited other satellite operators to hitch a ride on its own launches (for a price, of course). 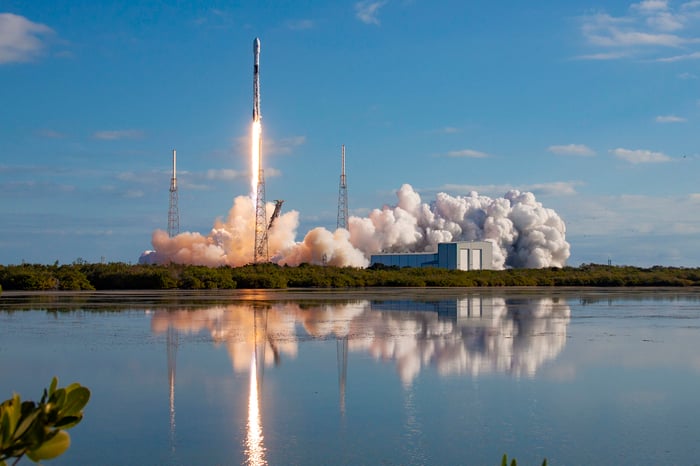 A starlink rocket is shown taking off from a SpaceX facility. Image source: SpaceX

A field with few alternatives

The only other pure-play space investment you can buy right now is Richard Branson's Virgin Galactic (SPCE 1.06%), which is currently unprofitable. While SpaceX isn't required to report financials, a 2017 report showed the company eking out a (narrow) profit on its space-launch operations.

Unlike SpaceX, Virgin Galactic is focused on "space tourism," offering rich folks the chance to reach near-Earth orbit for about $250,000 a pop.

Virgin Galactic's long-term play seems to be based on helping the wealthy get around the world faster with rockets, according to Fool analyst Travis Hoium. This has been tried before -- remember the Concorde? -- and it's always been a tough sell from a commercial and regulatory standpoint.

If we assume Virgin Galactic's market is limited to ultra-high-net-worth individuals with more than $30 million in assets, its total addressable market is about 265,000 people, and many of them may fly only once, just to say they did it. SpaceX's plans for affordable satellite-based internet connectivity could benefit millions, if not billions, of people worldwide.

A customer base of billions?

There are anywhere from 24 million to 163 million people in the United States alone who can't currently use the internet at broadband speeds, according to conflicting reports from the FCC and Microsoft. Nearly four billion people worldwide have no regular internet access at all.

Providing even a fraction of this unconnected population with steady and speedy online access would easily be worth billions of dollars in annual subscription fees to Starlink.

These details make Starlink seem like an IPO worth getting into, especially if its public debut occurs sooner rather than later.