Please ensure Javascript is enabled for purposes of website accessibility
Log In Help Join The Motley Fool
Free Article Join Over 1 Million Premium Members And Get More In-Depth Stock Guidance and Research
By Lou Whiteman - Feb 13, 2020 at 10:23AM

The company's prospects are strong enough that it is worth questioning the plan to split XPO piecemeal.

XPO Logistics (XPO -0.44%) has taken investors on a wild ride over the last 18 months, with the longtime outperformer's shares cut in half in late 2018 and early 2019 due to criticism from a short-seller and the unexpected loss of a major customer.

The stock recovered some of what it lost as 2019 went on, but the shipping company delivered another shock last month when it announced it was exploring a sale of one or more of its business units.

XPO's fourth quarter results provided fresh evidence that the issues that pummeled the company's shares a year ago are now in the rearview mirror, but also raised new questions about the plan to break XPO into pieces.

Here's a look at the company's operations, and a discussion of what investors should think about XPO's plans for its future.

Tech investments are paying off

On Feb. 3, XPO reported fourth quarter earnings of $1.12 per share, topping Wall Street's $1.08 per share estimate -- despite gross revenue that, at $4.136 billion, fell short of consensus by nearly $100 million. The company managed to grow adjusted EBITDA by 14% year over year, and earnings per share by 56% in the quarter, despite revenue falling 2.7%.

XPO's logistics segment generated a 10.4% adjusted EBITDA margin in the quarter, the unit's first double-digit margin quarter since 2015. And North American less-than-truckload, XPO's largest business, saw its operating ratio improve by 500 basis points year over year thanks to more favorable pricing, better use of tech, and some gains on asset sales. 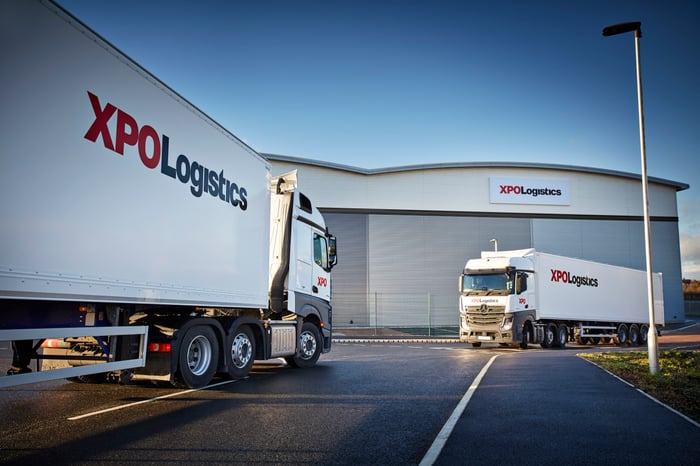 The company said it generated about $300 million in revenue from cross-selling in North America in 2019, up 37% from the year prior. Overall XPO says about 25% of its $2 billion increase in organic revenue between 2015 and 2019 is attributable to cross-selling new products to existing customers.

In recent years, XPO has made a big bet on tech, investing $500 million annually in products including XPO Connect, a cloud-based digital freight marketplace for shippers, and XPO Direct, which aims to help retailers compete with Amazon.com by providing a suite of logistics products. XPO Connect passed the 100,000 driver download threshold in December. And XPO Direct is on pace to be a $1 billion-sales business by 2022.

The company's initial 2020 guidance called for adjusted EBITDA of between $1.785 billion and $1.835 billion, with the low point ahead of the $1.774 billion estimate going into earnings. XPO management also said they are making progress on a previously announced streamlining plan aimed at improving EBITDA by $700 million to $1 billion annually by the end of 2022.

What to make of the break-up plan?

If XPO is operating well, and benefiting from cross-selling among various units, then why is the company considering a breakup? CEO Brad Jacobs was asked that question a variety of different ways from a number of different analysts during the company's post-earnings call, and each time he came back to his belief that no matter what XPO does it will be unable to shed its valuation discount compared to pure-play rivals.

Responding to an assertion by Barclays analyst Brandon Oglenski that over time XPO can shed that so-called conglomerate discount, Jacobs was adamant.

It really comes down to whether I agree or disagree with one of your sentences that the market is likely to give us a much higher multiple as they recognize our consistent profit improvement. I haven't seen it, Brandon. I haven't seen it despite many analysts, including yourself, on rooftops saying how great the company is. The reality is, the market has given us a high single digit EBITDA multiple and we have to accept that reality.

Of course, XPO's plan to shed businesses requires someone else in the market being willing to pay the multiple for those businesses that Jacobs is seeking. Jacobs conceded that without divestitures, XPO is on track to continue to improve EBITDA, calling that "an excellent plan B."

But Jacobs argues plan A, the breakup, will create more value because XPO's assets are so unappreciated by the market.

"If we take these four business units and market them in sales, there is a very good chance that we're going to get multiples that exceed by a substantial amount what we trade for as a conglomerate," Jacobs said.

Along for the ride

It's hard for a Foolish investor to know what to think about XPO right now. I own XPO for the long-haul and am intrigued enough by the potential of the combined businesses that I am willing to be patient and wait for the market to recognize that value.

But I also respect Jacobs' read on the market, and appreciate the opportunity cost in waiting around for a valuation boost that might never happen.

Certainly, XPO isn't the only industrial company complaining about a conglomerate discount. 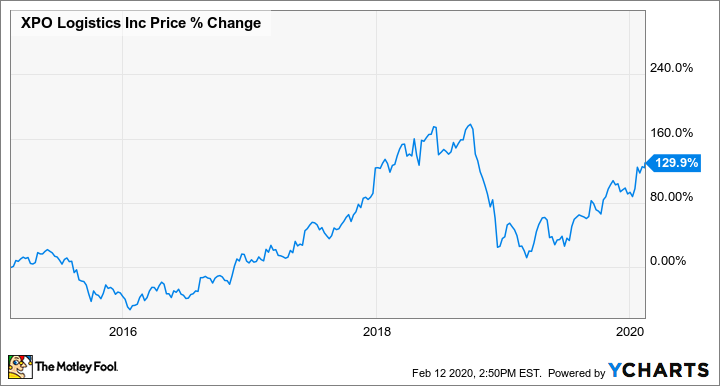 We know that XPO is marketing most assets other than its North American less-than-truckload unit, and Jacobs on the call said the process is "off to an excellent start" with more momentum than originally expected.

But without knowing exactly what XPO ends up selling, it is hard to know what the company will look like a year from now -- and near impossible to make a judgment about whether the company today is worth adding to a long-term focused portfolio.

I'm holding onto my shares through the process, with growing confidence that either via internal improvements or divestitures, XPO's valuation is likely to improve over the coming quarters.

Whether the remaining company is worth holding for the long-term, is a question for another day.