The percentage of total TV usage that goes to streaming video has nearly doubled in less than two years, according to a recent report from Nielsen. Consumers spent 19% of their TV time streaming video on demand (SVOD) instead of watching live or time-shifted television or playing video games in the fourth quarter, the report said. That's up from 10% in the first quarter of 2018.

Netflix (NASDAQ:NFLX) is, by far, the most popular paid streaming service, taking 31% of streaming. Disney's (NYSE:DIS) Hulu and Amazon's Prime Video lag in average engagement with 12% and 8% of streaming time, respectively. 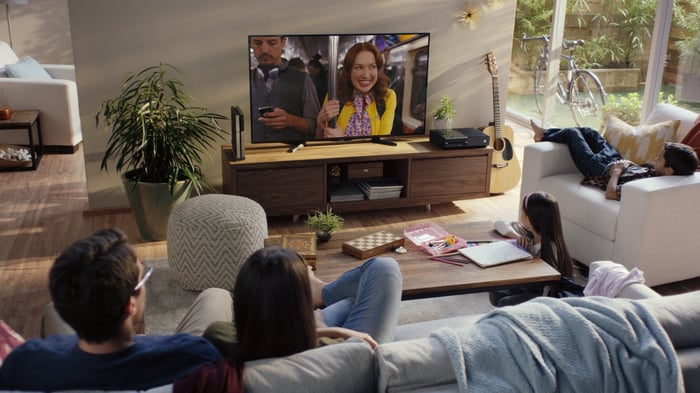 Ahead of the launch of Disney+ in November, Netflix CEO Reed Hastings said the most important metric to watch with new streaming video competitors is the amount of time they spend streaming. To that end, Netflix has defended its turf well. Management said viewing per member in the U.S. increased year over year in the fourth quarter despite some big competitive launches.

The shift in time spent streaming -- and streaming multiple premium SVOD services at that -- is only gaining momentum. The 9-percentage-point increase in streaming share in less than two years compares to the 10% market share the industry claimed in the first decade following the launch of Netflix's streaming service.

The most important factor determining whether subscribers keep their existing services is whether they use it enough to justify the cost. In other words, the cost per minute of entertainment.

That's where services such as Netflix and Disney+ are shining. Netflix users spend an average of over 2 hours per day streaming; Disney+ users spend around an hour per day. At just $13 and $7 per month, respectively, they represent incredible value versus most pay-TV packages. As more quality streaming options enter the market at relatively low costs, it could cause cord-cutting to accelerate and a further shift in television time spent streaming.

According to Nielsen, 60% of households are paying for more than one streaming service, and that number could grow. 93% of SVOD subscribers said they plan to keep their current subscriptions or add more.

While streaming now accounts for about one-fifth of the time spent consuming television, Americans spend a huge amount of time watching video throughout the day. In the first quarter of 2019, the average consumer spent 5 hours and 46 minutes per day watching video across television, mobile, and desktop computers.

As cord-cutting continues to take hold, consumers will look to fill the void of around four hours of video entertainment per day with additional streaming video. So, the positive engagement trends Netflix saw last quarter should continue even while new competitors such as Disney eat up a lot of time with millions of new subscribers. And with cost per minute of entertainment being the biggest factor determining subscriber retention, streaming services could actually see improved retention despite the increased competition.

In an industry where time is the most important measure of success, there's room for more than one winner. That's already starting to play out, according to Nielsen's data, and the trend of streaming video accounting for a greater share of television time should only continue to grow in 2020.