Please ensure Javascript is enabled for purposes of website accessibility
Log In Help Join The Motley Fool
Free Article Join Over 1 Million Premium Members And Get More In-Depth Stock Guidance and Research
By Will Healy - Feb 14, 2020 at 10:46AM

Zynga did better than it thought it would.

Zynga (ZNGA -2.04%) blew away its own fourth-quarter revenue and profit estimates when it reported quarterly results last week. The San Francisco-based mobile gaming company shot higher by more than 13% the day after the report.

While the stock trades near its highest levels since the hype after its initial public offering (IPO) ran its course, some wonder how much higher it can move. Though stock price growth may pause for a time, popular franchises, improving financials, and the direction management has taken the company should keep Zynga on a long-term growth trajectory.

For the fourth quarter, the company reported net income per share under generally accepted accounting principles (GAAP) of $0.00, which beat its estimate of ($0.05). Revenue of $404 million increased 63% from the same quarter last year. The company had projected quarterly revenue of $365 million. Bookings, which included deferred revenue, came in at an adjusted $433 million in the quarter.

The stock surged by 55.7% in 2019. Given the most recent report, it looks like its move higher could continue. 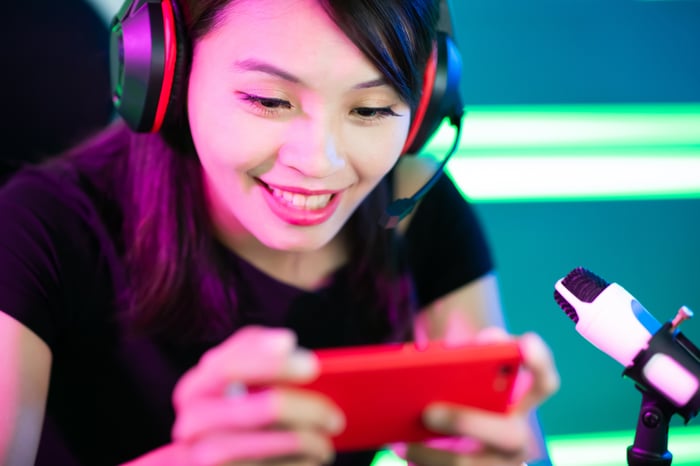 Zynga and the competition

Zynga has come a long way since it launched FarmVille on Facebook in 2009. Even though it ended its special relationship with Facebook in 2012, it still has games on the social media platform and also oversees games outside of that ecosystem.

However, by no means does this tech stock dominate mobile gaming. The company faces competition from the likes of Glu Mobile and Chinese conglomerate Tencent Holdings. Increasingly, gaming companies that traditionally focused on console games have also entered mobile gaming. For instance, Activision Blizzard recently partnered with Tencent on a mobile version of Call of Duty.

However, Zynga has built an advantage through acquisitions. This growth along with becoming cash-flow-positive has substantially lifted the profile of Zynga stock among analysts.  However, the advent of professional gaming competitions has increased the demand for more powerful gaming-oriented desktops, which could be a drag on mobile gaming. Given these trends, industry observers need to watch Sony and Microsoft as they release their next-generation gaming consoles later this year. If these sell poorly, it could signal a waning of console games and an increasing trend toward the games that Zynga and its mobile peers design.

I would caution investors not to expect another 55%-plus increase in Zynga stock this year. Zynga now trades at about $6.70 per share, near the multiyear high it recently achieved.

Its growth has taken the forward P/E ratio to about 24.8 and its five-year earnings growth rate of 19.04% per year takes its price-to-earnings-to-growth (PEG) ratio to 1.2. At these multiples, investors have little latitude to consider this company inexpensive. The price-to-sales ratio has also risen in recent years. In 2016, Zynga traded at just 3.1 times sales. Today, it sells for a price-to-sales ratio of about 5. While this does not change the long-term outlook, it could see reduced gains over the short term as investors become wary of the multiples.

However, even if the company pulls back for a time, few question the positive direction it has taken since former Electronic Arts executive Frank Gibeau took over as CEO in March 2016. Not only has he turned Zynga into a profitable company, but he has also revived investor interest in Zynga stock, as evidenced by a rising stock price.

Zynga stock had mostly traded below $3 per share since the post-IPO hype ran out. Since Gibeau took over, the stock has climbed steadily and continues to achieve new multiyear highs. 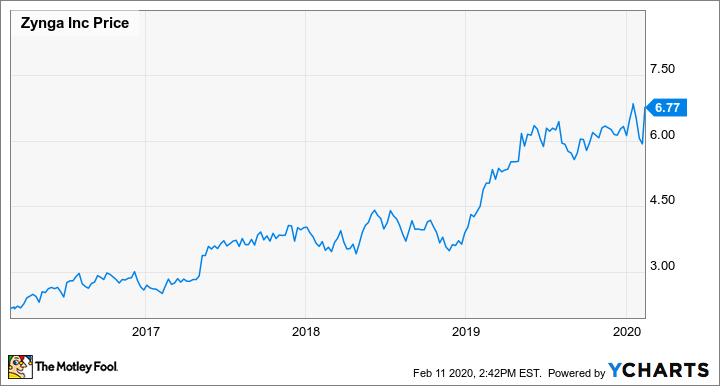 Zynga stock has steadily moved higher since 2016, and with the 2019 rally extending into 2020, it has now moved to highs not seen since soon after the IPO. Zynga languished for years as gamers lost interest in some of its franchises and the company burned cash.

However, the leadership of Gibeau has changed the outlook for Zynga. There is renewed interest in its games, it's creating new franchises and there is positive cash flow. This has helped the stock price to rise after years of stagnation.

As mobile gaming grows in popularity and Zynga continues to build new franchises in the mobile ecosystem, Zynga stock looks like a buy, at least on pullbacks.