Please ensure Javascript is enabled for purposes of website accessibility
Log In Help Join The Motley Fool
Free Article Join Over 1 Million Premium Members And Get More In-Depth Stock Guidance and Research
By Evan Niu, CFA - Feb 19, 2020 at 11:00AM

The smart speaker market shows no signs of slowing down as companies continue to innovate on form factors and new categories, while expanding their product portfolios and lower prices. Worldwide unit volumes reached an estimated 146.9 million in 2019, according to estimates earlier this month from Strategy Analytics.

In the fourth quarter, Amazon.com (AMZN 0.25%) maintained its lead, followed by Alphabet (GOOG -1.29%) (GOOGL -1.34%) subsidiary Google, while Chinese rivals continued to chip away at the two dominant players. 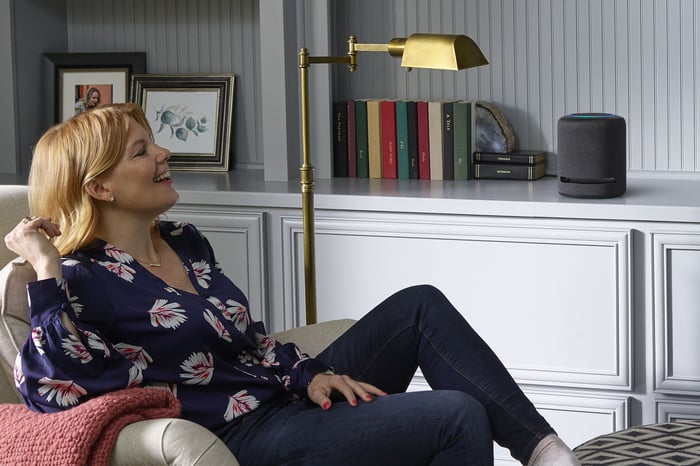 Total units in the fourth quarter hit a record 55.7 million over the holiday shopping season. That brought full-year units to 146.9 million, a whopping 70% jump from the 86.2 million units the market shipped in 2018. Compare that with the 32 million units in 2017, and the market has soared more than four and a half times over in the course of two years. 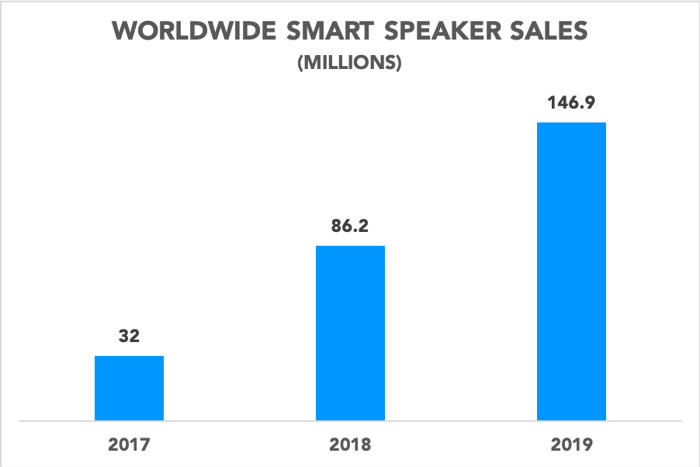 Strong demand in the U.S. and Europe drove sales, while Google saw its smart speaker business recover after units had plunged in the third quarter. After consolidating its smart home products under Nest earlier in 2019, the search giant had refreshed its $49 Nest Mini in the fourth quarter. Google has also been benefiting from recurring Spotify promotions that give away free speakers to premium subscribers. The Swedish music streaming leader has said the partnership has "driven a meaningful amount of incremental subscribers," so don't be surprised if Spotify and Google keep giving away free stuff.

Here's how each company fared in the final quarter of 2019:

"Consumer appetite for smart speakers remained undimmed during the all-important Q4 period as newly launched devices with improved feature sets and audio performance helped drive record quarterly shipments," Strategy Analytics director David Watkins said in a statement. "Consumers across the world were once again enticed by scarcely believable deals from leading brands such as Google, Amazon, Baidu, and Alibaba, while Google in particular stepped up its giveaway promotional activity in partnership with brands such as YouTube and Spotify."

Chinese vendors have been growing with a range of affordable products, and China last year overtook the U.S. as the largest smart speaker market. Apple continues to underwhelm with the HomePod, which was released two years ago and has seen its price reduced; the Cupertino tech giant is expected to have a more affordable HomePod in the pipeline that could launch later this year.

The market researcher expects the momentum to continue into 2020, which should set yet another record for smart speaker sales even though the coronavirus outbreak is threatening to disrupt the consumer electronics market.