Please ensure Javascript is enabled for purposes of website accessibility
Log In Help Join The Motley Fool
Free Article Join Over 1 Million Premium Members And Get More In-Depth Stock Guidance and Research
By Alison Healey - Updated Feb 19, 2020 at 8:29AM

The company is owned by a group of experienced infrastructure investors with an eye on boosting profit, but uncertainty related to PG&E's bankruptcy remains.

Clearway Energy (CWEN 3.50%) is a renewable energy company with an asset portfolio that has grown to more than 7 gigawatts (GW). The company owns wind, solar, and gas-fired generation as well as district energy systems which are used to heat and cool commercial and government buidlings.

Clearway is due to report Q4 earnings before the market opens Feb. 27 and investors have indicated they may have high hopes, since the company's share price is up more than 51% over the last 12 months.  Here's a look into some of the questions would-be investors should ask themselves  to determine whether it's time to invest. 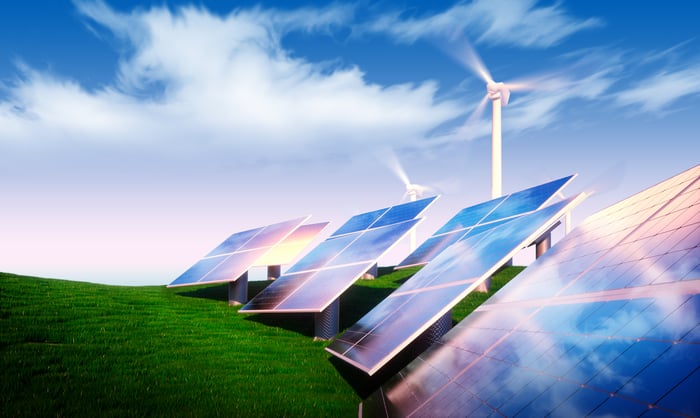 How important is its backer?

Clearway Energy was formed in 2018 when NRG Energy (NRG 1.48%) sold a controlling interest in its yieldco NRG Yield to Global Infrastructure Partners (GIP), a firm owned and managed by veteran energy and project finance investors. GIP is led by Adebayo Ogunlesi as chairman and managing partner. Ogunlesi is well known in the energy world as the former global head of investment banking and head of global energy at Credit Suisse Group and a lead director on the board of Goldman Sachs. He has assembled an experienced energy investing team that includes several former Credit Suisse colleagues.

The firm focuses on finding what it characterizes as high-quality assets in sectors the team knows well. It makes equity investments with the more than $51 billion it manages for investors in its funds, and works to improve asset performance and service quality, targeting returns in the range of 15% to 20%, according to Infrastructure Investor.

The sponsor's experience may not translate to higher returns on a long-term basis for Clearway, however, since it can't be known how long they will remain involved. More important to the company is its own management team, led by Christoper Sotos as Chief Executive Officer and Chad Plotkin as Chief Financial Officer. Both are former executives from the company's predecessor, NRG Yield, and their many years of experience working with the assets in Clearway's portfolio can be considered a strength. But it is also important for investors to note they were on board as its debt burden grew and NRG Yield was hurt by some poorly timed acquisitions, as in the case of the rooftop solar program that later became NRG Home.

Under GIP's leadership, there have been a number of debt refinancings to get more favorable terms, the most recent of which was a $600 million bond offering with a 4.7% interest rate that will take out more expensive debt with a 5.3% coupon rate.  The company has also been busy signing new contracts that will provide a long-term source of recurring revenue. For example, last week the company said it had lined up power purchase agreements with a unit of American Electric Power and Toyota Motor Corporation for its 110 megawatt (MW) Black Rock wind farm.

Clearway's EPS and revenue were up year over year for Q3, but the company posted a loss for the first nine months of the year

Its cash available for distribution (CAFD) was $177 million for the quarter, up from $156 million in the same period a year ago, but again down over the nine-month period.

A number of the company's assets sell their power to bankrupt California utility PG&E (PCG 4.70%), and earnings have been hurt by the inability to take distributions and redeploy capital from the projects tied into the bankruptcy. At the end of Q3, about $140 million was trapped in these assets, the company said on its quarterly conference call.

Clearway owns or invests in roughly 1.2 GW of power generation projects with long-term supply or capacity contracts with PG&E. When PG&E's bankruptcy filing was executed, Clearway had approximately $1.4 billion of non-recourse debt associated with the projects.

Clearway has reached agreements with certain lenders so they won't pursue foreclosures on the PG&E-linked projects, but the situation has prevented Clearway from accumulating as much unrestricted cash as it expected and its liquidity and cash available for dividends and investments has decreased as a result.

The PG&E exposure led Clearway to cut its dividend early last year and Clearway's Q3 earnings contained a disclaimer letting investors know that its future results may be further affected by the bankruptcy.

On a positive note, PG&E has made progress in recent months toward emerging from bankruptcy and its most recent reorganization plan recommitted the utility to buy power from renewable energy projects. The Natural Resources Defense Council (NRDC) in a blog post earlier this month said the new plan "goes well beyond earlier commitments to honor the company's contracts to purchase electricity from renewable energy providers."

Clearway Energy benefits from an experienced sponsor team in Global Infrastructure Partners that has started to seize on opportunities to shore up the company's finances in the two years it has held a controlling stake. The company also has an attractive dividend yield at 3.8%, but the company's link to PG&E's bankruptcy keeps the payout in danger of further cuts.

And while Clearway has made progress in refinancing debt, there is much work still to be done, with debt-to-total-capital at more than 77% and a high debt to EBITDA ratio at 7.6 times and on the rise. Investors would be wise to watch Q4 earnings later this month to get a clearer understanding of the company's plans to improve its balance sheet. Barring any major surprises, they may want to to keep the company on the radar as PG&E emerges from bankruptcy and eliminates uncertainty that could be weighing on share price. But while PG&E's plan to emerge from bankruptcy seems positive for Clearway in terms of hanging on to its contracts, there are no guarantees and several months left to go.