There's nothing like being bought out at a premium by a peer company, or reporting an estimates-crushing quarter.

We're very close to the weekend, which is good for the stock market because it needs a break. Most major indexes were down notably on Thursday; perhaps it's the lingering concern about the economic effects of the COVID-19 coronavirus, or the lack of inspiring news from many of the market's top stocks.

Whatever the reason, it was a gloomy Thursday for many stock investors... unless they had some of their money in these two companies, which blasted past the market on an otherwise forgettable day. 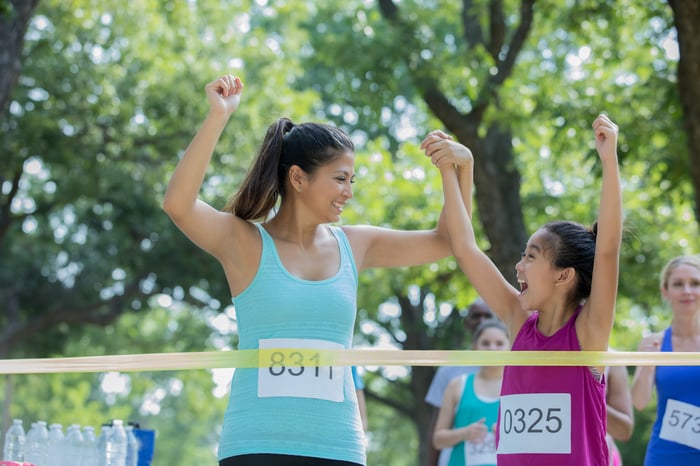 In yet another act of consolidation in the securities brokerage sector, E*Trade Financial (ETFC) agreed to be acquired by white-shoe investment bank Morgan Stanley (MS -1.50%). The all-stock deal is valued at $13 billion, or $58.74 per share. Since that's around 30% higher than E*Trade's Wednesday closing price, the stock shot up by almost 22% today.

In retrospect, a buyout from a Morgan Stanley-sized bank was bound to happen sooner or later. The dominoes started to tumble in early 2017, when financial services giant Fidelity cut its commissions for securities trading by $3 to $4.95 per trade. This triggered a sporadic price-cut war, which culminated in most name brokerages -- E*Trade included -- eliminating such commissions entirely last year.

Compounding this for E*Trade is the fact that it was never a particularly standout performer in the sector. In contrast to some of its rivals, it struggled with profitability and growth over the years.

And despite admirable attempts at diversification, it was still vulnerable to the disappearance of commission revenue. Due largely to this, the company's overall net revenue declined by 8% year over year in its most recently reported quarter -- and this, in the midst of a long-tail bull market for securities.

Don't get me wrong, I think the death of securities trading commissions is a boon for us individual investors -- even though I'm invested in the brokerage sector (by owning shares of TD Ameritrade, itself a recent takeover, in its case by Charles Schwab).

But with that revenue stream gone, this industry is now the patch of big boys like Morgan Stanley that can better absorb the loss. Regardless, congratulations to E*Trade shareholders on the buyout and resulting share price spike.

Now this is how you close out a fiscal year. Online real estate broker Zillow Group (Z -0.51%) (ZG -0.77%) saw both its share classes rise by around 17% on Thursday following the company's release of its Q4 of fiscal 2019 results.

With housing prices being what they are, it's a good time to be in American real estate, and it's a good time to be a real estate broker. Fueled by Zillow's more direct involvement in this robust market, its revenue rose nearly 160% on a year-over-year basis to almost $944 million. The company's GAAP net loss deepened but not excessively -- it came in at $101 million ($0.49 per share) against the Q4 2018 deficit of nearly $98 million.

On average, analysts tracking the stock had much lower expectations. They were modeling only $815 million or thereabouts on the top line, and a per-share net loss of $0.57.

The steep revenue growth was due almost entirely to a $560 million-plus improvement in the take for the company's "homes" segment. In this business, which was still a baby at this point last year, Zillow directly buys and sells residences.

There's still growth to be had, assuming our housing market at least maintains its frothiness. Homes' core Zillow Offers service, in which homeowners can go on the company's site to receive direct bids for their residences, is operating in only 23 markets in 11 states across the country. On top of that, last year Zillow started entering into partnerships with homebuilders to serve clients wanting to go the new-residence route.

The company's on a clear growth path -- only I'd caution that since the homes unit is past its embryonic stage, we probably won't see such grand revenue improvements as in Q4. Zillow's expenses are high, too, which is a key reason why it's landed in the red not only in this quarter, but in quarters past. Still, this company is well worth watching, and could be a good play for investors who are bullish on the durability of our housing market.