Please ensure Javascript is enabled for purposes of website accessibility
Log In Help Join The Motley Fool
Free Article Join Over 1 Million Premium Members And Get More In-Depth Stock Guidance and Research
By Steve Symington - Feb 20, 2020 at 9:00AM

The coronavirus outbreak might dampen the OLED technologist's start to the new year. Here's what investors need to know.

Universal Display  (OLED -2.96%) is slated to release fourth-quarter 2019 results after the bell today (Thursday, February 20). But with shares of the promising tech stock down 16% so far this year, it seems the market has already braced for bad news when its press release hits the wires.

It certainly didn't help that some traders were anxious to take profits off the table after Universal Display stock more than doubled in 2019 -- a rise driven by what Chief Financial Officer Sid Rosenblatt described last quarter as "the proliferation of OLEDs across the consumer electronics spectrum ... fueling a tremendous multiyear capex cycle."

Even so, the bulk of Universal Display's recent drop came last month, as industry watchers began to fret over the fallout of China's coronavirus outbreak. In particular, those concerns stem from the potential for constrained demand for the company's flagship phosphorescent OLED emitter materials bound for display manufacturers in the Middle Kingdom. 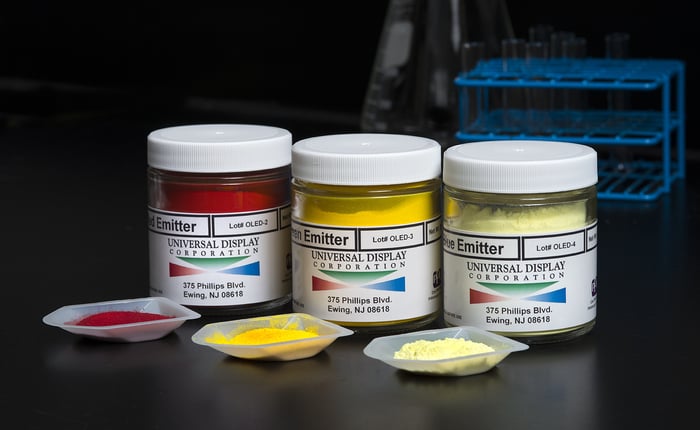 But, as my colleague Evan Niu recently pointed out, all three companies manufacture OLED displays for Apple (AAPL -2.52%) to use in its massively popular iPhone and Apple Watch product lines. And any investor paying attention this week knows Apple effectively sent the market into a tizzy on Monday by warning it would fall short of its own revenue guidance for its current fiscal second quarter. To blame, Apple said, was the impact of the coronavirus outbreak, namely in the forms of weak demand for Apple products in China and constrained worldwide iPhone supplies as the tech behemoth works to ramp iPhone production back up to more normal levels.

That said, Apple also offered the caveats that the resulting iPhone supply shortages should only prove temporary -- which means any impact to Universal Display should also be short-term in nature -- and that consumer demand across its product lines has remained "strong" outside of China. It further remains to be seen, however, whether Apple's near-term supply constraints are shared by other smartphone makers that rely on Universal Display's OLED wares.

In addition, this doesn't preclude the possibility that Universal Display might deliver an impressive quarter and reasonably strong forward guidance regardless of coronavirus factors. Recall six months ago, for example, Universal Display announced significantly better-than-expected second-quarter 2019 results in part as some Chinese customers accelerated their PHOLED emitter materials purchases to mitigate the impact of tariffs that could be incurred under the ongoing U.S.-China trade war. If Chinese suppliers happened to take similar pre-emptive steps as the coronavirus outbreak began to unfold, it could mean Universal Display's exposure to the outbreak has been limited.

In any case, Wall Street will be looking for Universal Display to meet its latest guidance for full-year 2019 revenue arriving in the range of $400 million to $410 million, which should translate to earnings of roughly $3.11 per share. And looking forward, analysts' consensus estimates currently predict the company will offer full-year 2020 guidance for revenue of roughly $496 million -- up around 22.5% year over year from the midpoint of that 2019 range -- with earnings climbing further to $4.04 per share.

Make no mistake, while I don't usually pay close attention to Wall Street's demands, I think we're almost certain to see some wild swings in today's after-hours trading that hinge on the extent to which Universal Display's fourth-quarter results and forward guidance deviate from those estimates.