Please ensure Javascript is enabled for purposes of website accessibility
Log In Help Join The Motley Fool
Free Article Join Over 1 Million Premium Members And Get More In-Depth Stock Guidance and Research
By Mark Prvulovic – Feb 20, 2020 at 10:01AM

It's another win for the promising treatment.

Roche (RHHBY -1.53%) announced on Wednesday that the U.S. Food and Drug Administration had accepted its supplemental Biologics License Application for the cancer drug Tecentriq. In addition, the FDA also granted a Priority Review to the drug for use in patients with non-squamous and squamous non-small cell lung cancers.

This approval was based on recent clinical results from the phase 3 IMpower110 study, which evaluated Tecentriq as a monotherapy in comparison to other types of chemotherapy. The results showed that Roche's cancer drug improved overall survival time by 7.1 months. The FDA is expected to review the data and come to a decision by June 19. 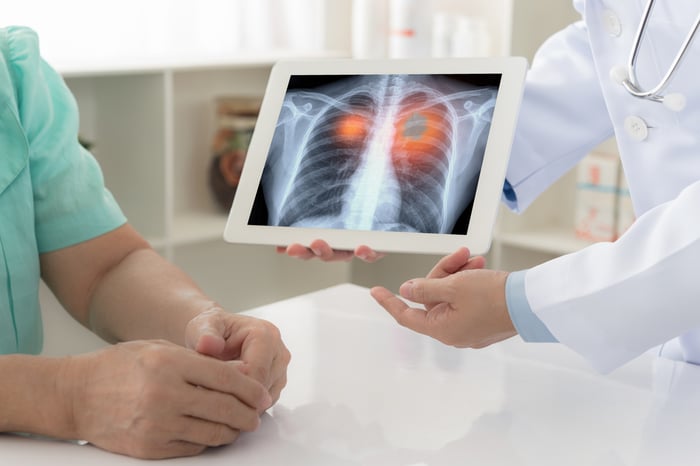 Approximately 85% of all lung cancer cases fall under the non-squamous cell classification. Lung cancer remains one of the leading causes of death worldwide, accounting for around 1.76 million deaths globally, and many pharmaceutical companies are working to develop treatments.

While Tecentriq is doing well in the realm of lung cancer, it has not had great success against other conditions. Bladder cancer, in particular, has been challenging for the drug; it failed to be effective against it in a major late-stage trial that had a data readout in January. Although Tecentriq is seen as a potential competitor to  Keytruda, it is still far from generating revenue at the level of Merck's cancer drug.