Please ensure Javascript is enabled for purposes of website accessibility
Log In Help Join The Motley Fool
Free Article Join Over 1 Million Premium Members And Get More In-Depth Stock Guidance and Research
By Rich Smith – Feb 21, 2020 at 10:33AM

Lithium gets all the headlines, but other chemicals make more money.

Alongside Tesla, investors in Chilean miner Sociedad Quimica y Minera de Chile (SQM 2.62%) -- which produces much of the lithium that eventually ends up in the form of lithium batteries in Tesla's vehicles -- have been treated to a 15.5% gain in seven weeks. That's not as good as Tesla's gains, but better than a sharp stick in the eye.

At the same time, shares of Dow (DOW) stock -- a maker of more generic chemicals -- are still underwater, and swimming 10% below where they were when first spun off from chemicals conglomerate DowDuPont way back in March. Clearly, investors seem to think more of Sociedad Quimica y Minera's prospects as a stock, than they do of Dow's ... 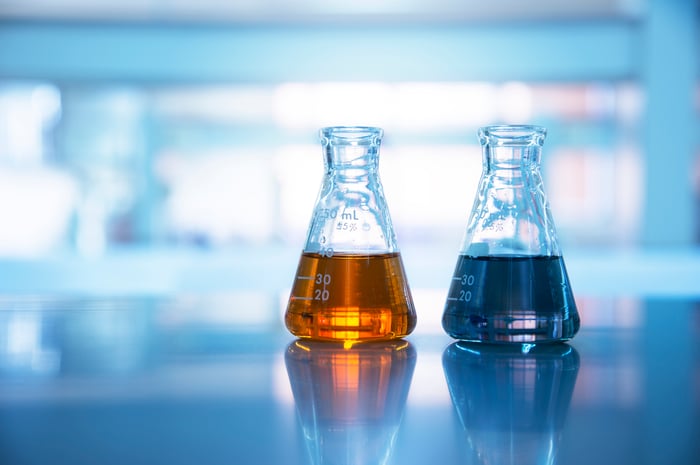 Sociedad Quimica y Minera de Chile -- or SQM as it's more commonly, and mercifully called -- is popularly known as one of the world's bigger lithium stocks. To an extent, that's understandable. With demand for lithium for electric car batteries (and cellphone batteries, and laptop batteries) growing, lithium is currently the company's most profitable product, accounting for about 43% of SQM's gross profit, despite contributing only 31% of its revenues.

But although lithium is SQM's most profitable product by far at present, generating 42% gross profit margins, in fact, much of the company's $1.8 billion in assets are devoted to less profitable endeavors. Notably, the company's plant nutrients business is actually bigger than its lithium business, accounting for 36% of total revenues -- and at a gross profit margin just half of what SQM makes on lithium -- 21%.

That wouldn't necessarily be such a bad thing, if the lithium business was getting bigger and more profitable, and the nutrients business shrinking in relative size. In fact, however, data from S&P Global Market Intelligence show that revenues at both businesses are down mid-single-digits over the past year, and lithium profits in particular have plummeted 39% -- right in line with the decline in lithium prices over the past year.

Result: Gross profits at SQM, which peaked in mid-2018, have slid steadily for the past five quarters straight.

Granted, analysts who follow the company believe lithium production will ultimately rationalize with lithium demand, stabilizing prices, permitting profits to resume growing as early as this year. Yet even so, at a share price of more than 25 times trailing earnings -- and more than 75 times free cash flow -- I can't say as I'm particularly optimistic about joining this rally in SQM shares, and buying the stock today.

Fortunately, the situation at Dow looks a whole lot more attractive to me -- both from a valuation perspective, and as an investor approaching retirement age and considering the attractiveness of a steady, reliable source of dividend income.

Spun off from DuPont, Dow has emerged somewhat lacking in the "profits" department -- at least, as such things are calculated according to generally accepted accounting principles (GAAP) -- but admirably suited to generate the kind of cash needed to fund a generous dividend policy. Over the past 12 months, this $35 billion company has generated positive free cash flow of $3.9 billion, a number that stands in marked contrast to its $1.4 billion GAAP net loss. Asset writedowns may have dinged reported earnings at Dow, but it's clear that the cash machine remains fully functional.

While not part of the sexy lithium industry, Dow continues to do yeoman's work churning out such workaday products as packaging as specialty plastics, cellulose, silicon, and latex for industrial uses, and performance coatings (such as go into making paint). Its chemicals business may not garner the positive press of a company tied to Tesla, but Dow's ability to generate cash is unquestioned. Valued on free cash flow, the stock trades for only a 9x multiple.

Factor net debt into the picture -- as I think a conservative investors should do -- and Dow's its valuation rises steeply. Still, at an enterprise value-to-free cash flow ratio of 13.4, I think this is a very reasonable valuation for a company paying out a 5.9% dividend yield, and expected to grow its profits at about 7.7% annually over the next five years. (Note: SQM also pays a dividend yield, but one that varies with the company's income -- and that has been shrinking for the past three quarters). http://s1.q4cdn.com/793210788/files/doc_downloads/2019/05/14.-2019-Dividend-Policy-Proposal.pdf

Long story short, when choosing between SQM and Dow, I'm more than happy to leave the "sexy" chemicals company to more risk-tolerant investors. To me, Dow stock is the better -- and safer -- choice.