Please ensure Javascript is enabled for purposes of website accessibility
Log In Help Join The Motley Fool
Free Article Join Over 1 Million Premium Members And Get More In-Depth Stock Guidance and Research
By George Budwell - Updated Feb 25, 2020 at 8:52AM

The U.S. stock markets took a sizable step backwards yesterday, presumably on the emerging COVID-19 threat. A more careful look, however, suggests that the market was basically due for a correction. After all, most major indices were bumping up against their all-time highs, and valuations across the large-cap space were close to twice the historical average prior to this viral outbreak. So while the COVID-19 illness may have sparked this sell-off, it was arguably long overdue from a fundamental standpoint. In fact, Warren Buffett warned the retail crowd about this very issue via Berkshire Hathaway's 2019 annual letter to shareholders.

Despite these unfavorable market dynamics, there are a few rare gems still worth buying. Who are these unicorns? The pharmaceutical companies AbbVie (ABBV 0.37%), Bausch Health Companies Inc. (BHC -3.06%), and Bristol-Myers Squibb (BMY 1.49%) are all trading at less than 10 times next year's projected earnings right now. Here's why risk-averse investors might want to pounce on these three value stocks in the days and weeks ahead. 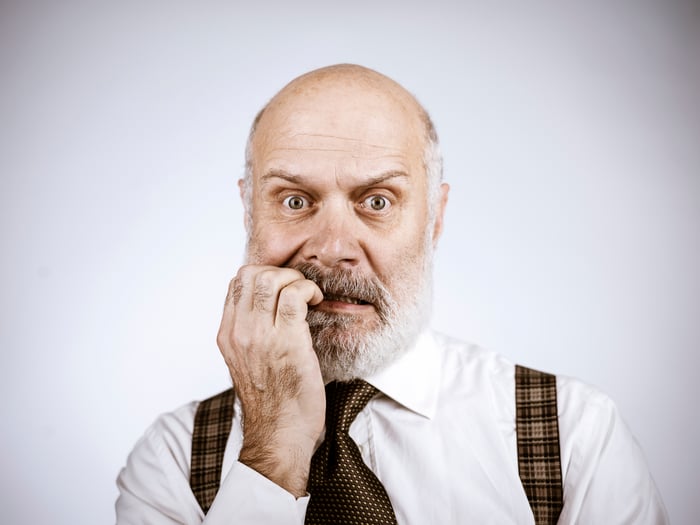 AbbVie, an Illinois-based drugmaker, is currently trading at 8.85 times next year's projected earnings. That's one of the lowest valuations within its peer group, as well as one of the lowest for a Dividend Aristocrat, a status it gained through its former parent company Abbott Laboratories. AbbVie, though, arguably doesn't deserve such a ridiculously low valuation.

The bugaboo with this large-cap biopharma stock is the upcoming patent cliff for its flagship arthritis medication Humira. However, this overhang has now been dealt with through the commercial launch of the immunology meds Rinvoq and Skyrizi, as well as the forthcoming merger with Allergan (AGN) that's expected to close before the end of the first quarter.

What makes AbbVie an outstanding defensive stock? Apart from its rock-bottom valuation, AbbVie should ultimately post near industry-leading levels of top-line growth with Allergan in the fold. What's more, the drugmaker offers a dividend yield of almost 5% at current levels. That's essentially a junk-bond-type yield attached to a Dividend Aristocrat. In all, AbbVie's shares may pull back with the broader market, but it should hold its own better than most because of its attractive valuation and sky-high dividend yield.

A well-diversified Canadian pharma on the mend

After Bausch Health's blistering rebound in 2019, its comeback has largely stalled in 2020. The company's less-than-stellar fourth-quarter 2019 results, combined with its ongoing debt overhang, has apparently been reason enough for some investors to take profits this year. The direct consequence of Bausch's latest downturn is that its stock is now trading at a paltry 5.76 times next year's estimated earnings. That's ridiculously cheap any way you slice it.

Why should bargain hunters consider this name during this turbulent period in the market? The simple answer is management. Bausch's new management team has guided the company from the brink of bankruptcy just a few years ago to where it is today -- a solid mid-cap biopharma set to post low-single-digit sales growth for the next few years.

Of course, the debt issue will continue to loom large for perhaps the next five years. But Bausch's creative management team should be able to navigate these troubled waters. As proof, they successfully reinvigorated the flagging commercialization of the constipation med Trulance since taking it over from Synergy Pharmaceuticals. That's an impressive feat, to be sure.

Now, Bausch will arguably need to unearth a few more hidden gems like Trulance to complete its comeback. But the company's brain trust has given investors a surfeit of reasons to be optimistic about the future. In turn, this Canadian pharma stock probably shouldn't be trading like a distressed asset gearing up for a bankruptcy filing.

Bristol's shares have failed to capture Wall Street's imagination of late, thanks to the dwindling market share for its immuno-oncology med Opdivo. Underscoring this point, this big pharma stock is being presently valued at less than 9 times 2021 estimated earnings, which is among the cheapest valuations within its entire peer group. Wall Street, however, is arguably dead wrong about this name.

Following the company's tie-up with cancer behemoth Celgene, Bristol now sports eight blockbuster-level products and one of the most robust oncology pipelines in the pharmaceutical industry. The company's highly diverse product portfolio and top-shelf pipeline should thus translate into a a rock-solid competitive moat in the years ahead. Put simply, Wall Street is making far too much of a fuss over Opdivo's competitive positioning. Bristol is no longer a one-trick pony, after all.

What's more, Bristol also offers investors a respectable annualized yield of 2.74% at current levels. The drugmaker's fairly average yield for a big pharma stock may not be overly exciting, but it does give investors another avenue for capital appreciation. Dividends of any kind, after all, have proven to be a powerful way to generate substantial returns on capital over the long term.

All told, defensive-minded investors may want to consider this big pharma stock for its attractive near-term growth prospects, robust clinical pipeline, dirt-cheap valuation, and prospects as a steady income play in an increasingly uncertain environment.