Please ensure Javascript is enabled for purposes of website accessibility
Log In Help Join The Motley Fool
Free Article Join Over 1 Million Premium Members And Get More In-Depth Stock Guidance and Research
By Lee Samaha - Feb 28, 2020 at 6:44AM

It's interesting to compare the performance of multi-industry industrial stocks Illinois Tool Works (ITW -0.13%) and 3M (MMM 0.19%) over the last few years. The two used to be pretty much correlated but the divergence since the spring of 2019 has been remarkable. Both companies have suffered the ill wind of the decline in the industrial economy, but ITW's self-help initiatives have led to it significantly outperform 3M -- a company whose most disappointing performances in recent years have actually come from its least cyclical businesses. Let's take a closer look at Illinois Tool Works and 3M to find out which is the more attractive stock. 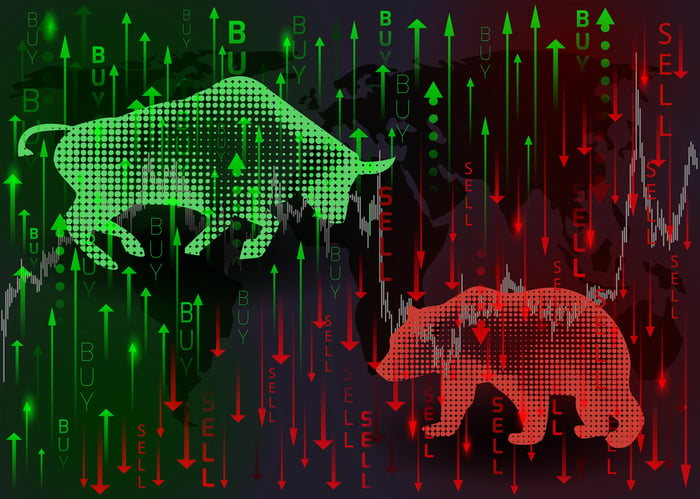 Illinois Tool Works, 3M, and other industrial companies have been battling some challenging end markets in 2019. It's no secret that the industrial economy is in a tough place right now, with particular weakness in key end markets like automotive, trucking, and oil and gas. On the fourth-quarter earnings call, ITW CEO Ernest Scott Santi described it as "an industrial demand environment that went from decelerating in the first half of the year to contracting in the second half of the year."

Indeed, ITW's management started its fiscal-year 2019 predicting organic revenue growth of 1% to 3% for the full year, only to end up with a decline of 1.9%.The deterioration in its end markets can be seen in a breakout of its year-over-year growth by segment. Growth in the automotive sector has been in negative territory for over year and the highly cyclical welding segment's growth turned negative through 2019.

The one major bright spot in the fourth quarter was the "test and measurement and electronics" segment, which benefited from the cyclical bounce in semiconductor spending that's been observed by others. 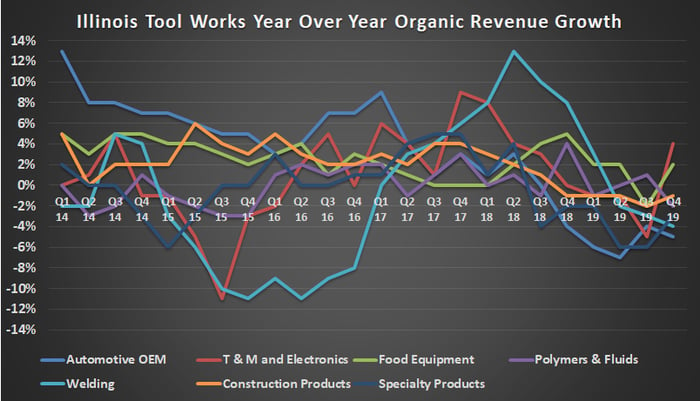 Moreover, the company continues to generate underlying margin expansion through its enterprise initiatives -- a series of measures aimed at expanding margin by simplifying businesses, pruning unprofitable product lines, taking on supply chain initiatives, and focusing on its key customers using the 80/20 principle (whereby around 20% of its customers do 80% of its business).

You can see the positive impact on margin of these initiatives in the following chart. For reference, 100 basis points, or bp, is equal to 1%. Therefore, the 120 bp generated in 2019 would have, all other things being equal, led to an operating margin increase of 25% compared to 24.3% in 2018. In fact, if you exclude restructuring expenses, operating margin increased to 24.4% -- a very credible result considering total revenue declined 4.5% in 2019. 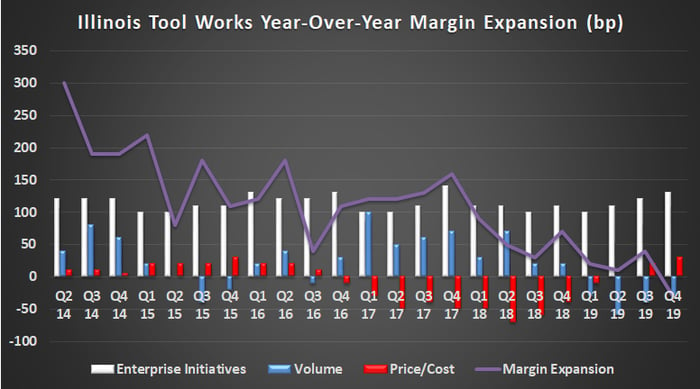 All told, the bullish case for ITW is that its enterprise initiatives -- management expects another 100bp of margin improvement in 2020 -- will lead to ongoing margin expansion. And when the global industrial economy picks up, so will ITW's revenue growth and margin expansion prospects.

In comparison, 3M needs to make its restructuring plans work and demonstrate that it can return its healthcare and consumer segments back to the kind of growth its management expects, even as it battles many of the same cyclical headwinds that ITW is facing.

The first answer is probably neither. The second answer is if 3M can demonstrate progress on its restructuring efforts and start to deliver earnings in line with guidance on a consistent basis, then the stock is interesting. However, trading on nearly 20 times its current earnings, it's hardly a good value for the assumptions you will need to make before buying the stock.

Meanwhile, ITW's valuation simply isn't giving investors a lot of upside to compensate for the risk that its margin expansion growth might slow. A quick look at valuations reveals that the premium that 3M once held over ITW and its sector has now turned into a discount. 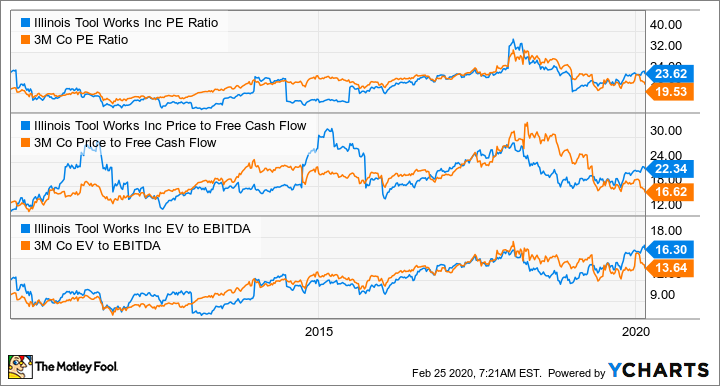 All told, both these stocks are worth monitoring with a view to buying in at some point, but the heightened risk around their near-term prospects and their valuations relative to their earnings prospects make them ones for the watch list, rather than the buy list.