Please ensure Javascript is enabled for purposes of website accessibility
Log In Help Join The Motley Fool
Free Article Join Over 1 Million Premium Members And Get More In-Depth Stock Guidance and Research
By Neha Chamaria - Mar 2, 2020 at 11:21AM

Three stalwarts in three incredible industries with massive potential: Look no further than these stocks to build a fund for your child's college.

Statistics reveal that the total student debt in the U.S. has ballooned to a staggering $1.5 trillion. That means among all of the financial goals you might set and works toward today to secure your future, building a fund for your children's college is of paramount importance. Starting early by investing in buying and holding some great stocks is just one of ways to save for your child's college.

By great stocks, I mean shares of companies that have established their prowess in respective fields, have strong growth prospects, and are committed to shareholder returns. Here are three such stocks that can help you send your kids to college.

Procter & Gamble (PG 0.06%) is a household name. From inventing VapoRub in 1894 to owning 65 globally renowned brands, including Gillette, Bounty, Tide, Pampers, and Oral-B, P&G has come a really long way. It sells in 180 countries today under 10 broad product categories.

P&G's success story lies in its dual focus: make quality products that either serve daily needs or solve problems. So if toothpaste is a daily need, we also don't think twice rubbing Vicks or popping drops to get relief from that nasty cough. If products and brands like these have sustained for more than a century, there's little reason to doubt they won't be around when it's time to pay for your child's higher education. 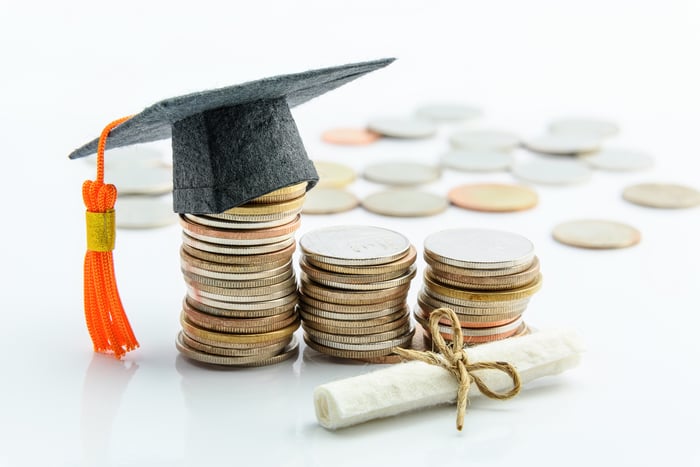 Innovation has been the key to P&G's growth, as much as consumer analytics and relentless global expansion -- the company consistently spends roughly 5% revenue in capital expenditures and uses nearly every possible channel to sell for mass reach. That's what's made P&G's products so ubiquitous. Walmart and affiliates, for example, accounted for roughly 15% of P&G's total sales in 2019. Top 10 customers, however, accounted for only 36% of its total sales.

Of course, these are immediate goals, but P&G's ubiquity makes it a powerful stock to own for decades. Dividends further add to the stock's appeal: P&G has paid a dividend every year for 129 years and increased it consecutively for the past 63 years. Your kids will thank you for owning P&G.

Investing in healthcare stocks for the long haul is a no-brainer, given the ageing population and how all of us need diagnosis, treatment, restoration, and prevention of and from illnesses and injuries at some point. Multibillion-dollar Medtronic (MDT -0.21%), which is the world's largest medical devices company by sales, makes for a great stock to invest in for decades and build funds for your life goals.

Medtronic runs four business segments: cardiac and vascular, minimally invasive therapies, restorative therapies, and diabetes. The cardiac and vascular group accounts for 38%,  and the next two groups combined almost 55% of Medtronic's total revenue. In total, Medtronic generated $30.6 billion in revenue in 2019 and spent 7.5% of it on research and development. Today, Medtronic owns more than 47,000 patents, operates in more than 150 countries, and gets nearly half its sales from outside the United States.

Medtronic has a solid pipeline of innovative products, such as robotic surgical equipment for the minimally invasive therapies group, a deep-brain simulation device, and a MiniMed 780G insulin pump. The diabetes group and emerging markets offer massive growth opportunities. China is an important market, and sales from overall emerging markets have consistently grown by double digits in the past five years. Shareholders have reaped rich rewards over the years. 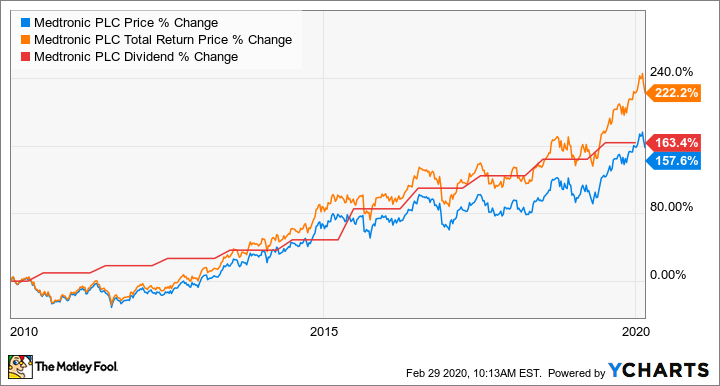 Medtronic's dividends, in fact, have hugely contributed to the stock's performance: Medtronic has increased its dividend annually for 42 consecutive years and grown it at an impressive compound annual growth rate of 17% during the period. Buy and forget Medtronic stock.

Make cash from no cash

Chances are, you barely use cash to transact and don't even realize how much you depend on plastic and virtual money, be it debit, credit, prepaid cards, or even digital wallets. So what are the chances your kids will ever use cash? In fact, there's a powerful war on cash brewing around the globe, especially as e-commerce booms. One company that could make a killing out of cashless societies and send some of that money your way to fund your kid's college is Visa (V 0.84%).

Since 1958, Visa hasn't just facilitated transactions between consumers and merchants through its global payments network but has also grown exponentially. Picture this: In 1960, Visa had less than a million co-branded cards in circulation and moved less than $1 billion payments through its network. In 2016, Visa moved a staggering $7 trillion globally through more than 3 billion cards in circulation. And it's not just individuals: Visa counts some of the world's top companies among its clients, including Disney, Marriott, Air Canada, Amazon.com, and Uber.

Visa has a massive addressable market as more nations go digital. The Asia-Pacific region is a great example. Fintech, e-commerce, digital banking, and mobile wallets should open up massive growth opportunities. Visa is already making big moves in digital wallets, including partnerships with Paytm in India and WeChat Pay and Alibaba-backed Alipay in China.

The prospects keep me hopeful that Visa could continue to earn operating margin north of 50%. Also, although small, a target dividend payout ratio of 20%-25% should supplement investor income and boost share prices further.

A cashless world will quickly become a reality, making Visa an incredible stock to own as you build funds for your kids' college.