Adjusted EBITDA rears its ugly head as the money-losing company turns to a made-up metric to measure profitability.

"Think of the basic intellectual dishonesty that comes when you start talking about adjusted EBITDA," said Charlie Munger earlier this month. "You're almost announcing you're a flake."

Munger, vice chairman of Berkshire Hathaway and longtime business partner of Warren Buffett, doesn't mince words when it comes to a metric that money-losing companies have increasingly adopted. Adjusted earnings before interest, taxes, depreciation, and amortization is not a good measure of profitability. It's not a good proxy for cash flow. It's lipstick on a pig, and nothing more.

Despite its meaninglessness, adjusted EBITDA has become the "profitability" metric of choice for companies including, but certainly not limited to, Uber, Lyft, and Pinterest. You can now add SmileDirectClub (SDC 2.97%) to the list. After a disastrous fourth-quarter report that sent the stock crashing, the provider of dental aligners has set a goal of turning adjusted EBITDA positive by the fourth quarter of this year. 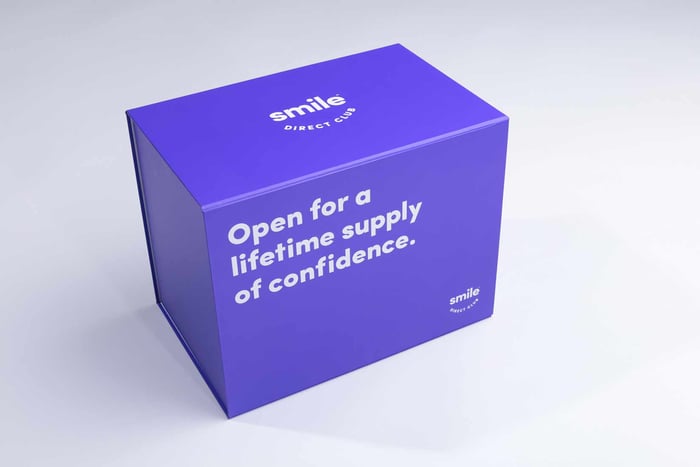 SmileDirectClub is growing its sales at a brisk pace, with revenue up 53.1% in the fourth quarter to $197 million. Revenue missed analyst estimates by a few million dollars, which is one reason the stock tanked.

Some of SmileDirectClub's revenue is recurring, but not much. The company recommends using its retainers at night following treatment with its aligners, and it recommends replacing those retainers every six months. During the first nine months of 2019, retainers and other products generated just $13.7 million of revenue. Aligners and impression kits generated $508.9 million of revenue during the same period.

A subscription software company can justify spending a huge percentage of revenue on sales, because its revenue is largely recurring. SmileDirectClub mostly makes one-off sales of aligners and impression kits. Spending 64% of revenue on sales is insane.

Given the massive losses, the plan from here is to "control our growth," according to CEO David Katzman. Why would a growth company want to control its growth? Because the sales the company is making are wildly unprofitable. Meal-kit company Blue Apron tried to pull the same stunt, cutting back on marketing to try to make its sales more profitable. How did that work out?

SmileDirectClub expects to grow revenue by 40% this year as it refocuses on the customer experience and the bottom line. The company will reduce costs and aim to produce positive adjusted EBITDA by the fourth quarter.

As Blue Apron learned, when your business is marketing driven and you try to cut marketing spending, you start to have some trouble winning customers. And Blue Apron had the benefit of being a recurring-revenue business. SmileDirectClub does not.

Aiming to turn adjusted EBITDA positive instead of a more meaningful profitability metric lowers the bar substantially. It allows SmileDirectClub to ignore a bunch of real costs, like depreciation and all that pesky stock-based compensation. When a company's goal is to make a nonsense number positive, I don't think investing in that company is a great idea.

SmileDirectClub may very well succeed in producing positive adjusted EBITDA by the end of the year. It will be a meaningless achievement.

3 IPOs With a Lot to Prove Next Week