Please ensure Javascript is enabled for purposes of website accessibility
Log In Help Join The Motley Fool
Free Article Join Over 1 Million Premium Members And Get More In-Depth Stock Guidance and Research
By Matthew DiLallo - Mar 3, 2020 at 10:37AM

Western Midstream's yield and outlook suggest two very different views on the direction of its dividend.

Units of master limited partnership Western Midstream Partners (WES 4.48%) have plunged nearly 60% over the past year. Several factors have weighed on the midstream company, including the continued turbulence in the oil and gas market and its relationship with Occidental Petroleum (OXY 2.55%). That slump in the MLP's unit price has pushed the yield on its distribution up to an eye-popping 18%.

Yields that high often become a dividend trap as they lure investors into what turns out to be an unsustainable payout. Here's a look at whether that might be the case for Western Midstream. 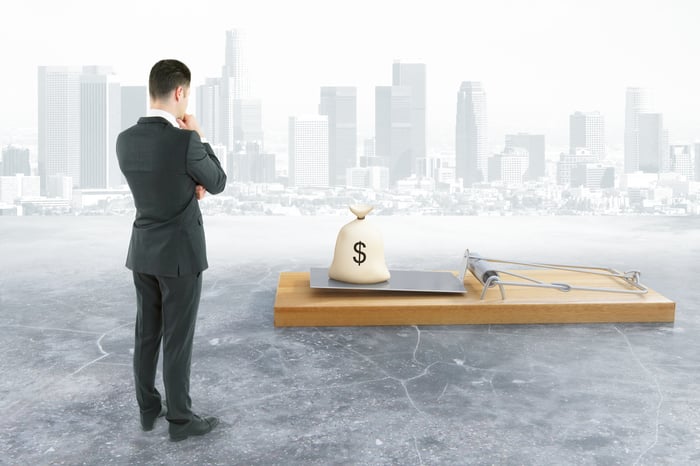 Why Western Midstream could be a dream stock for dividend investors

Western Midstream has treated income-focused investors well over the years. The MLP has increased its payout in each of the last 28 consecutive quarters, including growing it by 5.2% last year. Despite its sky-high yield, Western expects to increase its distribution by another 1% this year.

The company's financial metrics and outlook seem to support its plan to keep growing the distribution. Western's EBTIDA surged 17% last year, allowing it to generate enough cash to cover its steadily rising payout by 1.18 times. Meanwhile, it expects its EBITDA to increase by another 12% in 2020, which should enable it to cover its distribution by 1.25 times even after accounting for its planned 1% increase. That's a historically comfortable level for an MLP, which typically aimed for coverage above 1.2 times their cash flow.

That improving coverage ratio will enable Western Midstream to retain more cash to finance expansion projects. However, it still has a large gap to cover since it currently expects to invest between $875 million to $950 million on capital projects this year, though that's well below the $1.25 billion it spent last year.

Because Western Midstream expects to finance the bulk of its 2020 expansion program by borrowing more money, it's leverage ratio will end this year at around 4.5 times debt to EBTIDA. That's well above its historic leverage range of 3.0 to 3.5 and its target range of 3.5 to 4.0. While the company anticipates that leverage will slide below 4.0 by the end of next year as its earnings keep growing, its currently elevated level is making investors nervous since the company wants to maintain its investment-grade credit rating.

Because of all the volatility in the oil and gas market in recent years, most MLPs are targeting more conservative leverage and distribution coverage metrics. As a result, several have reduced their distribution level so that they can retain more cash to help finance capital spending, lessening the need to borrow money.

Equitrans Midstream (ETRN 6.74%), for example, initially anticipated that it would maintain its high-yielding dividend this year even as the company and its MLP, EQM Midstream, invested billions of dollars on expansion projects. However, Equitrans recently opted to slash its payout by 67% so that it could use that cash to quickly de-lever its balance sheet.

Equitrans is one of several energy companies initially promising that it could maintain or grow its payout only to go back on its word a few months later. So investors don't have much confidence in Western Midstream's ability to maintain its payout, especially since its coverage and leverage metrics aren't as strong as others in the sector.

Another issue for Western Midstream is its relationship with Occidental Petroleum. The oil and gas giant inherited a majority stake in the MLP when it bought Western's former parent Anadarko Petroleum last year. That deal added a lot of debt to Occidental's balance sheet, which it's working to address by selling assets, including some of its interest in Western Midstream. On top of that, there's a concern that Occidental's weakened financial state could cause it to cut capital spending if market conditions continue deteriorating. That could have lower volumes flowing through Western Midstream's systems, which would affect its earnings and cash flow.

A high risk for a reduction

Western Midstream's management team believes it can continue increasing its high-yielding payout this year. However, given the current market conditions and the company's below-average financial metrics, it might not deliver on that promise. Instead, it could opt to reduce its distribution and use that cash to finance capital projects so that its leverage ratio doesn't keep rising. Given the high risk of a reduction, Western's high-yielding payout could be a trap, making it unsuitable for dividend investors these days.