Please ensure Javascript is enabled for purposes of website accessibility
Log In Help Join The Motley Fool
Free Article Join Over 1 Million Premium Members And Get More In-Depth Stock Guidance and Research
By Andrew Tseng - Mar 4, 2020 at 11:00AM

Growth without profits or profits without growth?

Spotify Technology (SPOT 7.50%) and Verizon Communications (VZ -0.43%) couldn't be more different. Spotify is the world's largest paid audio streaming business and is growing like a weed without currently generating profits. Verizon is a telecommunications service provider and media giant that's not growing but pays out a portion of its profits as a dividend that amounts to a 4.3% yield.

Let's compare the two to see which is the better choice.

Spotify has over 271 million monthly active users (MAUs), including 124 million paying premium subscribers, and grew both metrics by 31% and 29%, respectively, last year. The company competes with global streaming services Apple Music, Amazon Music, and Alphabet's YouTube Music, but Spotify has begun to run away with the market. The primary reason is that Spotify has developed, and maintained, an incredible product. 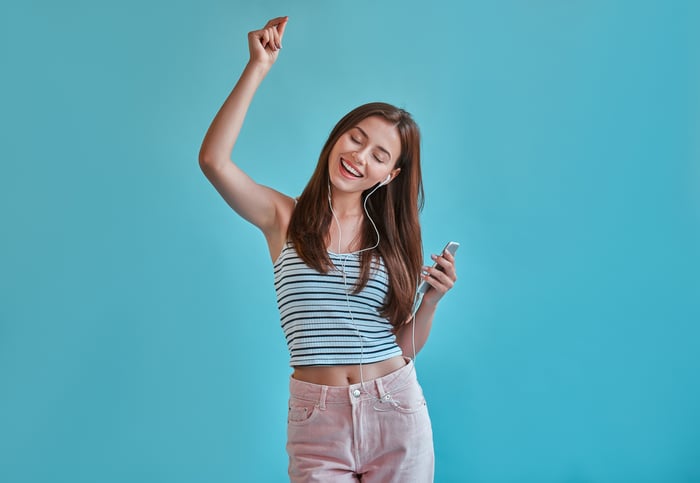 Spotify is best known for its user experience, including highly effective personalization and new music discovery. Once Spotify gets to know a user's tastes and preferences, the custom playlists it creates for each user become uncanny at predicting which songs they will like.

Management believes the service is better at this than others because it has a far larger and more engaged user base, so the company has much more user data that it can feed into its algorithms. Management has likened it to self-driving car technology: The company with the most real-world miles traveled has a meaningful data advantage that helps it extend its lead.

This product advantage creates surprisingly high switching costs. Once Spotify understands someone's tastes, creates custom playlists that users consistently enjoy, and users have created their own playlists, it is unlikely those users are going to want to switch to another streaming service. That's showing up in the data that Spotify has. CEO Daniel Ek believes Spotify is signing up new users at twice the rate that Apple Music is, while also maintaining a subscriber cancellation rate (also known as churn) that is half that of Apple Music.

In addition, Spotify has a big growth opportunity. The 124 million subscribers are about 4% of the 3.2 billion or more smartphone users globally, according to Warner Music Group. While some of those are in China, where Spotify doesn't operate, it still leaves a very large number of potential MAUs and subscribers that Spotify can attract in the years and decades to come. Spotify's gross margins should increase more than most people think over the long term due to its podcasting and marketplace initiatives.

Overall revenue has been almost exactly flat for the last five years, and operating income is down by less than 1% over the same period. The company has been using its relatively steady cash flows to repay debt and pay a quarterly dividend, which amounts to $0.615 per share and a 4.3% annual dividend yield.

Given the lack of growth and the decline in parts of the business, there are better investments available than Verizon. While dividends are appealing to income investors, some companies that pay large dividends tend do so because they don't have good opportunities to reinvest that money in their own business. Most of the companies that will generate huge long-term returns for their shareholders are currently reinvesting almost all of their resources back into their business.

In addition, wireless carriers face a long-term risk from companies like Apple, which is investing in satellite technologies to beam cellular signals directly to consumer devices. That could bypass the wireless carriers, which has the potential to materially harm their businesses. While long term and uncertain, this is a risk that Foolish investors should want to avoid.

Spotify is growing by leaps and bounds because it has a product that users love, and has a huge opportunity as more people globally discover streaming audio. Verizon is a big and steady business, but its lack of growth means it's unlikely to provide stellar long-term returns for shareholders.

Looking out 10 or more years, it's likely Spotify will have grown revenue and profits enormously as it increases its global user base and benefits from the growth of higher-margin initiatives like podcasting and its marketplace advertising. That's why investors should consider Spotify the better buy.