Please ensure Javascript is enabled for purposes of website accessibility
Log In Help Join The Motley Fool
Free Article Join Over 1 Million Premium Members And Get More In-Depth Stock Guidance and Research
By Beth McKenna - Mar 4, 2020 at 8:02AM

Virgin Galactic Holdings (SPCE 4.32%) stock skyrocketed 43.4% higher in February, according to data from S&P Global Market Intelligence. By contrast, the S&P 500 index suffered an 8.2% drop last month over fears that the novel coronavirus, COVID-19, could take a significant bite out of global economic growth.

Shares of the space tourism pioneer, which went public in October at $11.79 per share (via a reverse merger, not a traditional initial public offering, or IPO), have gained a whopping 111% in 2020 through Tuesday, March 3. This compares with the broader market's negative-6.7% return. 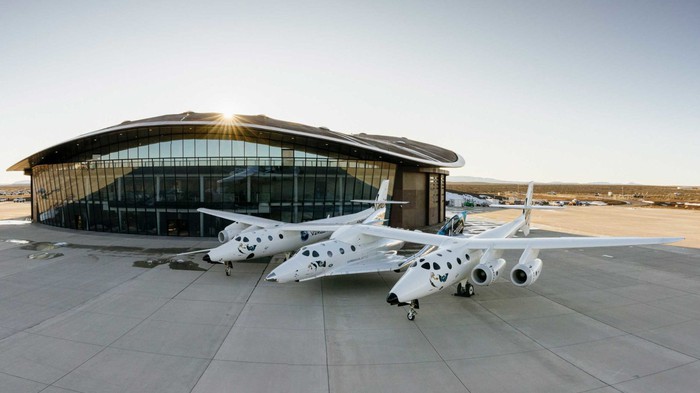 We can attribute Virgin Galactic stock's strong performance last month to investor enthusiasm over the company's growth potential. It aims to launch the world's first commercial spacecraft into suborbital space with paying passengers on board sometime this year. Assuming that launch occurs as planned, management has projected that the company will reach profitability in 2021. 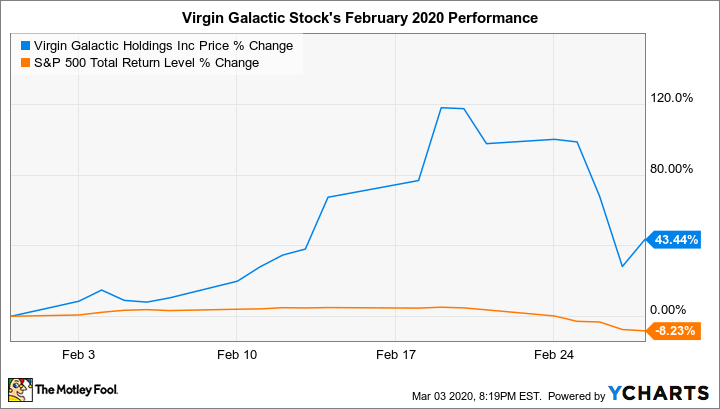 As the above chart shows, the stock was up even more in February before losing a good amount of altitude on Feb. 26. Shares dropped 15.5% on that day following the company's release of its fourth-quarter and full-year 2019 results after the market closed the day before. As I wrote in my earnings article, "We can probably attribute the market's negative reaction at least in part to the company's revenue and adjusted earnings before interest, taxes, and depreciation (EBITDA) results falling short of Wall Street's expectations." This metric came in at negative $54.8 million, whereas analysts had expected a loss of $46.9 million.

In Q4, Virgin Galactic's revenue fell 59% year over year to $529,000, less than the Street's $1.78 million consensus estimate. Revenue is negligible because the company hasn't yet begun its core operations. Net loss widened 59% to $72.7 million. The company is in good shape from a cash standpoint, with a stash of $480 million at the end of the period. 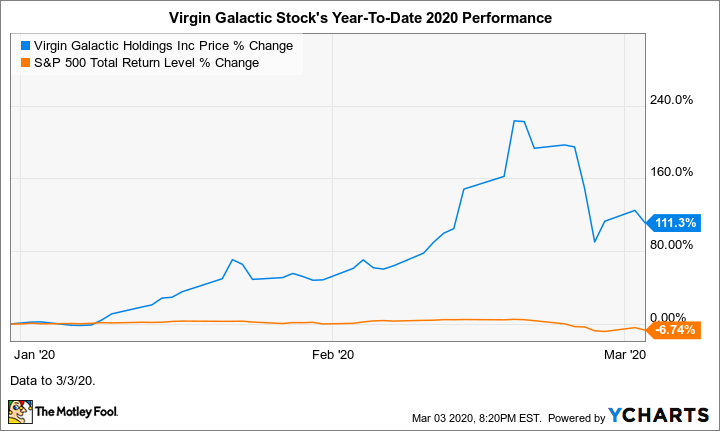 There's no need for investors to change their decided investment course on Virgin Galactic stock based on February's happenings. This is a "story stock" and a particularly risky one at that. Granted, the stock could soar much, much higher if the company is successful in its endeavors, but there's also a good chance it could crash and burn.