Please ensure Javascript is enabled for purposes of website accessibility
Log In Help Join The Motley Fool
Free Article Join Over 1 Million Premium Members And Get More In-Depth Stock Guidance and Research
By Rich Smith - Mar 5, 2020 at 11:19AM

Walt Disney (DIS 3.69%) missed a bonanza last Christmas. Thanks to coronavirus, it may miss another bonanza this Christmas as well.

Hoping to keep its popular "Baby Yoda" character from The Mandalorian a secret, Disney delayed ordering toys based on the character (officially known as "The Child") for as long as possible. Because The Mandalorian premiered with the advent of the Disney+ streaming service on Nov. 12, 2019, there were no Baby Yodas on store shelves in time for Christmas last year. 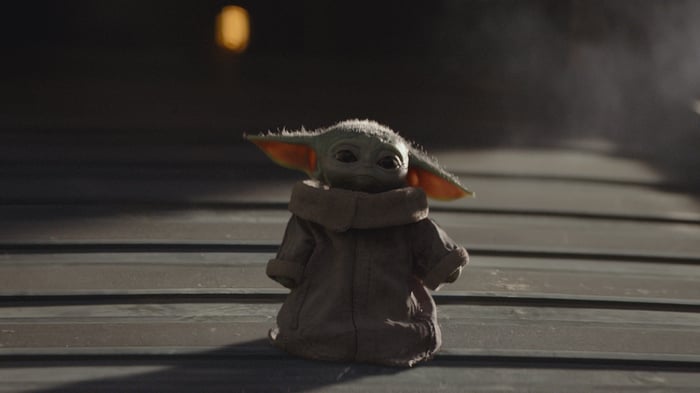 The Child, from Disney's The Mandalorian. Image source: Walt Disney.

Disney hoped to rectify this situation in plenty of time for Christmas 2020. The company announced last month it was hoping to have Hasbro (HAS 3.23%) -- its licensee for Star Wars-based merchandise -- start delivering Baby Yodas as early as this month. Throw in a bit of hype for the upcoming second season of The Mandalorian, premiering in October, and there was every chance Disney and Hasbro would both enjoy (albeit delayed) Christmas miracles in 2020.

CNN reported yesterday that Hasbro is warning of potential delays due to the coronavirus disrupting its supply chain in China. Unless this health crisis is put to bed by June, or at the latest July, there may not be enough workers in Hasbro's Chinese factories to assemble Baby Yoda toys.

There's still hope for a reprieve. Toy industry expert Jim Silver, CEO of Toys, Tots, Pets & More, told CNN Hasbro's suppliers may still be able to "ship what they originally projected," plus or minus 5% to 10%. But it's no sure thing.

The moral of this story: If you see a Baby Yoda toy for sale, buy it. You might not get a second chance.