Please ensure Javascript is enabled for purposes of website accessibility
Log In Help Join The Motley Fool
Free Article Join Over 1 Million Premium Members And Get More In-Depth Stock Guidance and Research
By Will Healy - Mar 5, 2020 at 7:40AM

Rising competition and falling revenue growth bode poorly for the stock of this food delivery giant.

Grubhub (GRUB) stock revved higher at the beginning of 2020 as the shares traded up nearly 20% year-to-date by Feb. 20. However, Grubhub stock fell along with most other names as novel coronavirus outbreak fears sent the various markets tumbling.

Even worse, Grubhub appears to face challenges separate from those related to the virus that could keep the pressure on the stock price. As the company continues to grapple with rising competitive threats, it will likely trade at lower levels one year from now unless it can find a competitive advantage.

Grubhub once dominated the restaurant delivery business. However, companies such as Uber's Uber Eats, DoorDash, and Postmates have made inroads into the food delivery market.

Consequently, DoorDash has overtaken Grubhub as the market leader, according to data research company Second Measure. It determined that DoorDash now controls 38% of the market, with Grubhub in second place at 31%. This is a dramatic fall for a company that controlled slightly over half of the market as recently as two years ago. 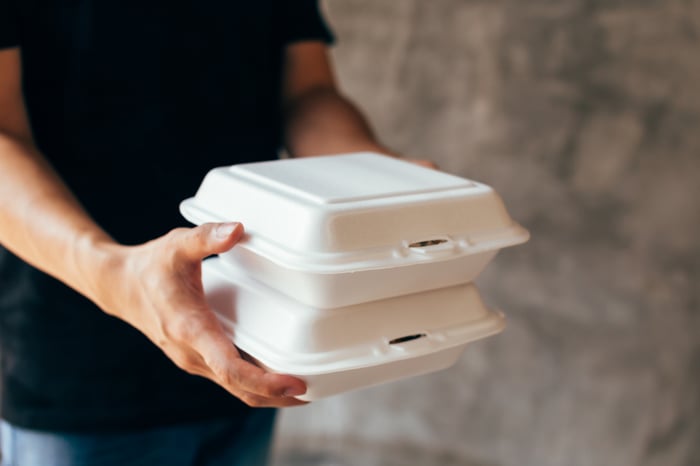 Grubhub maintains its dominance in New York City. It also holds the lead in Boston and its home market of Chicago. However, DoorDash has bested Grubhub in southern and western markets such as Houston and San Francisco.

Competition putting Grubhub on the defensive

With industry sales growing by 41% year-over-year, one might wonder whether the loss of market share is really a big concern. However, despite the growth of food delivery, Grubhub fell behind as competition cut into profits. This effect is evident in the company's attempt at following Amazon's lead by becoming the "Amazon Prime of food delivery." Still, this merely copies what Postmates instituted with Postmates Unlimited and Doordash's DashPass. Grubhub+, which offers free delivery from partner restaurants for $9.99 per month, could stem the company's loss in market share. However, it remains unclear whether that would help or hurt revenue. It could also reduce profitability.

The overriding factor that continues to trouble Grubhub and its peers is a lack of a competitive moat. Other than the restaurants with which they have signed exclusivity agreements, they have little power to stop a customer from going to a competitor.

This became evident as CEO Matt Maloney and CFO Adam Dewitt described customers who use multiple delivery services as "promiscuous" in the October 2019 shareholder letter. Grubhub stock fell by more than 43% in one day following that pronouncement.

Stock, financials on a downward trend

Investors appear increasingly aware of these competitive issues. The stock peaked last July and dropped precipitously for the rest of 2019. While it has recovered some of that loss, Grubhub stock has lost more than 41% of its value from the July high. It also has fallen by more than 68% since peaking at $149.35 per share in September 2018. 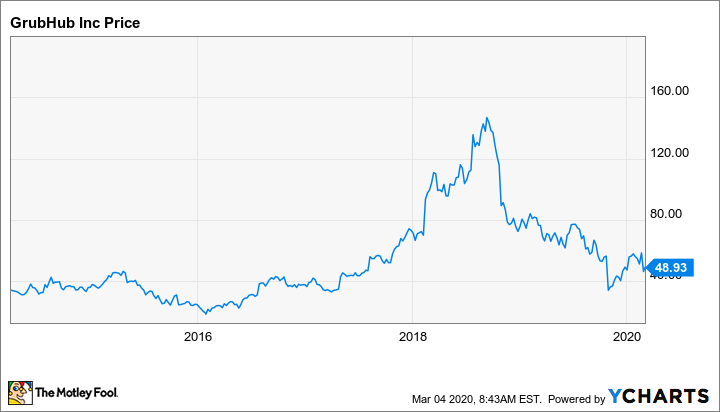 Thus far, Grubhub has chosen to fight this threat by placing pressure on its balance sheet. While the company boosted cash in 2019, an increase in long-term debt accounted for the majority of the $163.5 million net increase in cash Grubhub saw in 2019.

Worse for stockholders, it gives prospective investors another reason to look at food delivery as simply a commodity, which will probably lower demand for the stock. Furthermore, with DoorDash looking to launch an IPO of its own, Grubhub stock may soon become as commoditized as Grubhub's delivery service.

Despite this drop, Grubhub still trades at a super-high forward P/E ratio of over 475, a valuation not often seen in a consumer discretionary stock. Against projected 2021 earnings of $0.45 per share, that forward P/E would fall to just over 100. Still, Wall Street forecasts revenue growth of 11.5% this year and 14.4% in fiscal 2021. That's a far cry from the fiscal 2019 numbers, where revenue went up by about 30%. As these growth numbers fall to the low double-digits and possibly into the single digits beyond 2021, one has to question how long investors will pay triple-digit multiples for Grubhub stock.

Grubhub remains the second-largest food delivery company and remains the leader in some key markets. However, it now finds itself having to match competitor strategies as it struggles to maintain profitability. With its lack of a competitive moat becoming increasingly apparent, both the company and Grubhub stock look poised to become increasingly commoditized.

Given these conditions, investors may need to ask not whether Grubhub stock will trade lower one year from now, but by how much?