Please ensure Javascript is enabled for purposes of website accessibility
Log In Help Join The Motley Fool
Free Article Join Over 1 Million Premium Members And Get More In-Depth Stock Guidance and Research
By Anders Bylund - Mar 5, 2020 at 9:37AM

The video-streaming specialist isn't likely to change much over the next half-decade, except for continuing to grow its business at breakneck speed.

When it comes to estimating where Netflix (NFLX 2.90%) will be in five years, we investors don't have to guess in the dark. The video-streaming veteran's management has given us plenty of tools to help us find what we're looking for. It may not amount to an annotated map, but at least we'll have a flashlight and a pair of hiking boots for the journey.

These strategies aren't secret at all

First, Netflix has published its long-term goals, and they aren't hard to find. It's the first thing you see on the company's investor relations site, right next to the latest earnings report and a handful of frequently asked investor questions. The long-term view is built around these key ideas:

This is a high-level overview, not exactly jam-packed with fine-grained detail. But it's required reading for any Netflix investor, leaving you up to date on the company's business philosophy and core strategies. These bullet points sit at the heart of Netflix's operations and aren't likely to change much over the next five years. 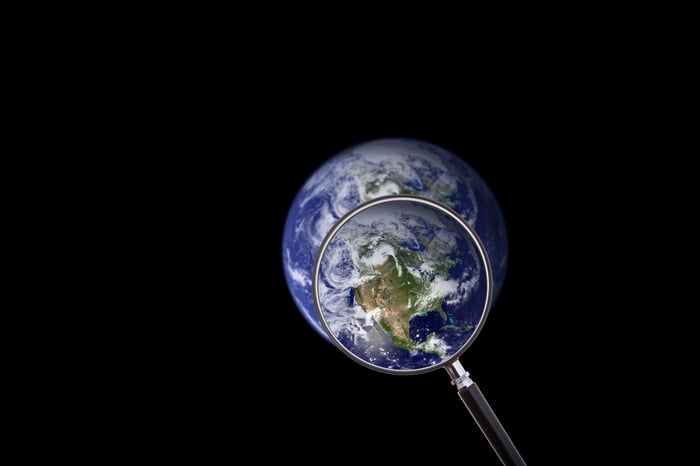 Sizing up the addressable market

At a recent technology and media conference hosted by Morgan Stanley, CFO Adam Neumann noted that the streaming service has penetrated 55% of American households so far. Applying that ratio to the TV-audience households in the rest of the world would result in more than 400 million paying members, up from 167 million today.

"But we're also not conceding that we hit some sort of a ceiling in the U.S.," he said.

The domestic business added half a million net new domestic subscribers in the fourth quarter, adding up to a 17% membership increase in 2019 as a whole. Because of price increases early in the year, the average revenue per user also rose by 17%. And the North American market also saw fresh competition from media titans Walt Disney (DIS 1.84%) and Apple (AAPL 1.62%), undermining Netflix's subscriber additions.

"And even with that, in Q4, we grew our members," Neumann said. "So there's not many businesses that can grow their members by single digits and grow pricing in the quarter year over year nearly 20%."

The conference host also tried to coax a target date for positive free cash flows out of Neumann. The CFO noted that Netflix is spending "the vast majority" of its content budgets on Netflix originals these days, and a growing portion of that large slice consists of fully in-house productions. Last year saw the peak of Netflix's cash burn at a negative free cash flow of $3.3 billion, followed by a guidance target of negative-$2.5 billion for 2020 and gradual improvement from there.

"Our primary objective isn't to hit a certain time. It's more to grow in a healthy way while we continue to pursue our strategy," Neumann explained. "So whether it takes X years, or X plus 1 or 2 years, as long as we're going in the right direction, I'm not sure why we should rush versus going after the much larger strategic opportunity that's out there."

So if you're reading this in 2025, give my regards to our new insect overlords and take a fresh look at Netflix.

If the company sports at least 300 million members now, adding up to annual revenue near $60 billion and strongly positive cash flow, management's long-term targets were properly calibrated in 2020. The company will have created hundreds of new shows and movies in a plethora of styles and genres, appealing to consumer tastes all around the world. Not much else will have changed. Netflix is still a subscription-based video-streaming service with no commercials and a user-friendly interface on all of your favorite screens and systems.

Unless, of course, Netflix found the next big idea to replace video streams over the internet, much like how it allowed the market-crushing DVD-mailing service to fade away when Americans started to get their hands on broadband internet services. My crystal ball isn't high-def enough to show game-changing ideas of that caliber.

Either way, Netflix will still be an exciting growth story in five years -- and beyond.