Please ensure Javascript is enabled for purposes of website accessibility
Log In Help Join The Motley Fool
Free Article Join Over 1 Million Premium Members And Get More In-Depth Stock Guidance and Research
By Rich Smith - Mar 6, 2020 at 10:45AM

On Friday morning, Chipotle announced that Ells, still believed to be "executive chairman" of Chipotle at the time, actually resigned his post effective March 3, 2020, and is no longer on the company's board of directors at all. His replacement as CEO of two years ago, Brian Niccol, has in fact also been Chipotle's chairman of the board since Tuesday. 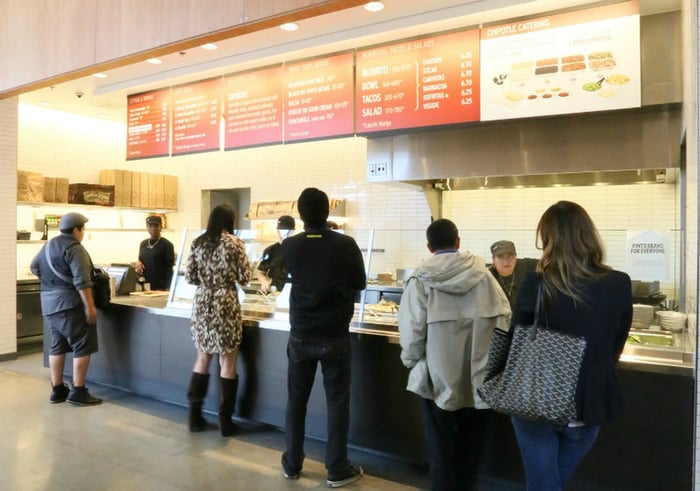 Bidding farewell to the company's founder, lead independent director Neil Flanzraich called Ells "a visionary founder who not only created a new and successful brand, but also revolutionized casual dining in 1993 with the introduction of Chipotle and the concept of food with integrity." Flanzraich continued, "We are grateful for all that Steve has done for Chipotle, including helping build and guide the current leadership team, and for his service as Executive Chairman during the last two years."

Now Chipotle sails under the undisputed captaincy of Niccol, a seven-year veteran of Chipotle rival Taco Bell and, before that, Pizza Hut, who traded one CEO's job for another in March 2018 when he jumped to Chipotle. In his two years at Chipotle, Niccol has already overseen a 25% improvement in sales, according to data from S&P Global Market Intelligence; improved gross, operating, and net profits margins; and nearly doubled net income. Free cash flow is up nicely as well, to $388 million in 2019.

It's surprising, then, to see that despite news of Niccol's increasing control over the company, Chipotle stock is down 2.2% today as of 10:05 a.m. EST.