Please ensure Javascript is enabled for purposes of website accessibility
Log In Help Join The Motley Fool
Free Article Join Over 1 Million Premium Members And Get More In-Depth Stock Guidance and Research
By Timothy Green - Mar 7, 2020 at 9:30AM

Already circling the drain, J.C. Penney and GameStop are now in even deeper trouble.

The novel coronavirus outbreak that originated in China is in the early stages of spreading in the U.S. There are now more than 200 confirmed cases in the U.S. and at least 12 people have died. Both numbers could rise rapidly in the coming days and weeks as the virus continues to spread.

On top of the human toll, the economies in affected areas could seize up as businesses close and people avoid leaving their homes. If the virus spreads widely, the U.S. economy could very well be thrown into a recession.

If you're an investor, now is the time to make sure the companies in your portfolio are capable of surviving a prolonged period of depressed demand. That's especially important if you own shares of retailers. Some retailers, like Walmart, Costco, and Amazon, will be just fine, even if their results suffer for a while.

Retailers that were already struggling before the outbreak won't fare as well. J.C. Penney (JCPN.Q) and GameStop (GME -3.56%) were both in serious trouble well before coronavirus became a household name. With the prospect of store traffic tumbling across the retail sector, both companies could fail before the coronavirus crisis is over. 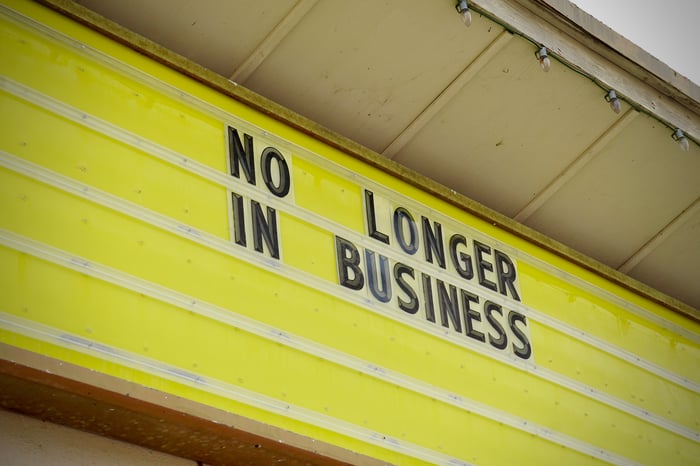 Department stores have been struggling for years, and J.C. Penney has been one of the worst performers. Customers have been fleeing the retailer, leading to tumbling sales. During 2019, comparable-store sales were down a whopping 7.7%. Even adjusted for the company's exit from its ill-fated attempt to sell major appliances, comps were down 5.6%.

J.C. Penney was unprofitable last year, partly due to interest payments on nearly $3.6 billion of debt. The company managed to produce positive free cash flow, but it did so by drawing down its inventory and likely underspending on maintaining its stores. While depreciation was $544 million for the year, J.C. Penney spent just $309 million on capital expenditures. That's a recipe for deteriorating stores in the long run.

Not factoring in the coronavirus outbreak, J.C. Penney expects comparable sales to be down 3.5% to 4.5% in 2020. Sales will be much worse if consumers start to stay home due to virus fears. J.C. Penney doesn't sell anything essential and was doing a fine job of driving away customers absent a potential pandemic.

If the coronavirus outbreak causes a recession, J.C. Penney looks unlikely to survive.

GameStop sells physical copies of video games in a world where digital downloads are growing in popularity. PC gaming has been almost entirely digital for a long time, and consoles are moving in that direction.

GameStop's abysmal holiday performance was a reflection of its failing business model. Comparable-store sales were down 24.7% in the nine-week holiday period, and the company now expects to report an adjusted net loss for the full year. The used-games business, where GameStop buys used games from customers and resells them at a lofty markup, has long been its cash cow. But there's no such thing as a used digital game.

Part of GameStop's problems are being caused by the imminent launch of a new batch of game consoles later this year, which is depressing demand for current-generation products. But that's not the only problem. A chain of thousands of stores selling physical video games simply doesn't make sense anymore.

GameStop has been reducing its debt, but it's also been pouring cash into share buybacks as its business circles the drain. Total debt stood at $419 million at the end of the third quarter, and the company spent nearly $180 million on share buybacks through the first nine months of the year. Those buybacks are a waste of money, in my opinion.

It's hard to imagine a retailer more fragile to a viral outbreak than GameStop -- its core product has a digital equivalent that can be purchased without leaving home, and customers were already moving in that direction. While the situation is already critical for the retailer, GameStop's demise could be greatly accelerated by the coronavirus outbreak.