Please ensure Javascript is enabled for purposes of website accessibility
Log In Help Join The Motley Fool
Free Article Join Over 1 Million Premium Members And Get More In-Depth Stock Guidance and Research
By Daniel Foelber - Mar 9, 2020 at 8:19AM

With natural gas prices at a four year low, which LNG company is the better deal?

Tellurian (TELL -2.19%), a liquefied natural gas (LNG) start-up, has lost around 80% of its value in less than a month. Cheniere Energy (LNG -0.02%), a much larger veteran in the LNG space, has also been under pressure as of late, largely in response to a competitive natural gas market that has led to short-term oversupply.

With natural gas prices around a four year low, it could be a good time for investors to dip their toes into Tellurian or Cheniere, but which one is the better buy? 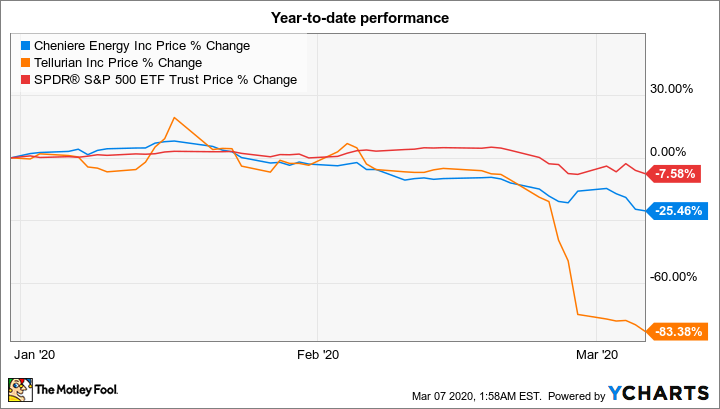 According to the EIA, natural gas production was 61.1 billion cubic feet per day (bcfd) in 2010. In 2019, it was 99.1 bcfd. As a result of improved technology and drilling techniques, the U.S. is now an energy leader, but other countries have also found ways to produce oil and gas for far less than in the past. Less cost combined with a lack of capital discipline led to a supply increase that outpaced the construction of pipelines able to connect supply to demand, forcing many players in the nation's largest shale play, the Permian Basin, to flare (burn-off) the gas associated with oil production.

The rise of U.S. shale coupled with lower production costs worldwide is inflicting downward pressure on commodity prices, despite the steady rise in global consumption as the world continues to grow in population and industrialize. These growing populations are mostly in, of course, developing economies like India and China, which together consume two-thirds of the world's coal and are in search of cleaner alternatives such as natural gas.

While the prospects for growth in natural gas consumption remain optimistic, those buying gas have the upper hand at the negotiation table. Buyers can also threaten to construct infrastructure for renewable power generation and industrial use, especially now that the levelized cost of renewables is competitive with fossil fuels. In this sense, the energy market has worked itself into somewhat of a corner in the short term.

Over the long term, U.S. firms hope that the joint efforts of low-cost gas production, coupled with pipelines delivering gas from producing regions to export terminals along the Gulf Coast, will give them a competitive edge in the global LNG market. 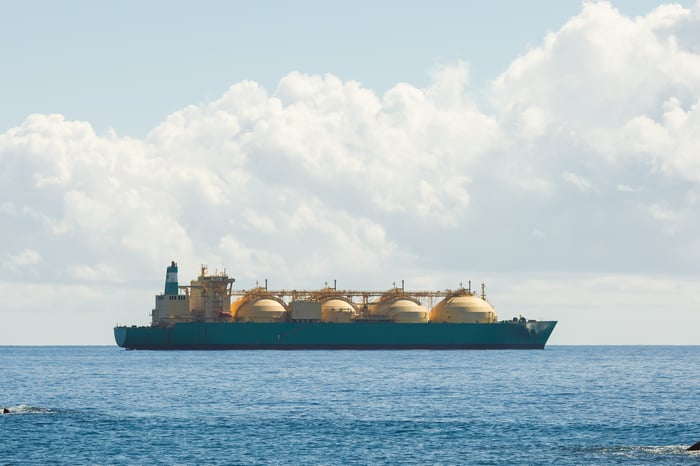 Tellurian has tethered its LNG stardom to the prospects of Driftwood LNG, which, if completed as expected, will be one of the largest LNG export terminals and liquefaction facilities in North America.

The facility will be located just south of Lake Charles, Louisiana, and have an export capacity of 3.63 billion cubic feet per day (bcfd) of natural gas, or 27.6 million tonnes per year. For reference, that's a staggering 20% or more of the total increase in Gulf Coast LNG exports that Kinder Morgan expects from 2019 to 2030. The project itself, as well as several connector pipelines that will funnel gas to Driftwood, are expected to be completed and in service by 2023.

Despite its experienced management staff, it may seem bewildering that a company as small as Tellurian is expected to pull off a project of this scale in today's LNG market. That doubt, paired with a delay in Tellurian's first major deal, capitulated into a grueling 82% stock sell-off between Feb. 18 and March 6.

If Tellurian can't secure the deals it needs from prospective buyers, it's going to have a hard time funding Driftwood LNG.

For now, Tellurian has lost its momentum. The company is in desperate need of cash in a market that isn't willing to give it out easily. If Tellurian can weather this storm or reach some sort of understanding with Petronet that would be good for both companies, then Tellurian will look a lot better than it does now.

Cheniere Energy is a staple in the LNG market. Unlike Tellurian, which is more of a business plan at this point, Cheniere is already well on its way with two major projects: the Sabine Pass LNG Terminal and Liquefaction Project and the Corpus Christi Liquefaction Project. Across the two projects, Cheniere has built seven of its nine planned liquefaction trains, with the remaining two under construction. Cheniere's full aspirations, consisting of longer-term expansion plans, aren't expected to come to fruition until at least 2023. In the meantime, investors will have plenty to smile with a significant portion of major projects already constructed or under construction.

More important than liquefaction capacity is the ability to generate solid returns. To protect itself from commodity price swings, Cheniere has adopted a long-term, fixed-fee contract model. It has contracted 85% of its 45 metric tonnes per annum (mtpa), which includes the additional capacity from Corpus Christi Stage three.

Buyers have already lined up for the seven trains Cheniere is operating from Sabine and Corpus Christi, paving the way for full-year 2020 consolidated adjusted EBITDA guidance of $3.8 billion to $4.1 billion, and $1.0 billion to $1.3 billion in distributable cash flow (DCF).

The confirmation of Cheniere's guidance is a testament to the benefits of Cheniere's long-term, fixed-fee contract model. The main risks to Cheniere are that its non-contract supply will be sold at bargain-basement prices and it will be harder to secure or renew contracts if there is a long-term LNG price glut. Cheniere claims that over 95% of its expected 2020 production has already been sold either physically or contractually via supply deals.

Like Tellurian, Cheniere is vulnerable to depressed natural gas prices over the long term since it is ultimately future price estimates that affect contract terms and justify new projects. But that's decades away. For now, Cheniere is well on its way to completing the entirety of its liquefaction trains for its two main projects and the vast majority of this supply is already tied to buyers. Still, investors should note that unlike other energy stocks, both Cheniere and Tellurian lack a dividend, meaning income investors aren't likely to find either stock attractive.

Since many energy companies are under strain right now, the biggest question is which companies have positioned themselves to best survive this downturn. With a better foothold on the present market, rising revenue, and cash generation that's expected to ramp up significantly over the next few years, Cheniere has an advantage and is the better buy over Tellurian. Its contracts have bought it some serious protection for 2020 and the next 19 years, whereas Tellurian's few customers, most recently Petronet LNG, have proven they can bully Tellurian around.

With both stocks currently on sale, investors with a high-risk tolerance could consider Tellurian and Cheniere, but Tellurian should be approached with caution.