The department store chain turns its attention to the growing digital gaming market.

Target (TGT 2.34%) just opened a new retail store concept that underscores the difficulty video game retailer GameStop (GME -2.58%) faces in trying to save its business from the rise of digital and online gameplay.

The Game Room is Target's experiment in the future of video gaming as it seeks to understand how consumers interact with emerging technology. By giving gamers a place to come in and explore the latest sites and gadgetry, the retailer will be able to transfer that knowledge to its traditional retail stores.

Unfortunately that's almost exactly what GameStop is trying to accomplish, and it indicates just how difficult it will be for the video game retailer to recover. 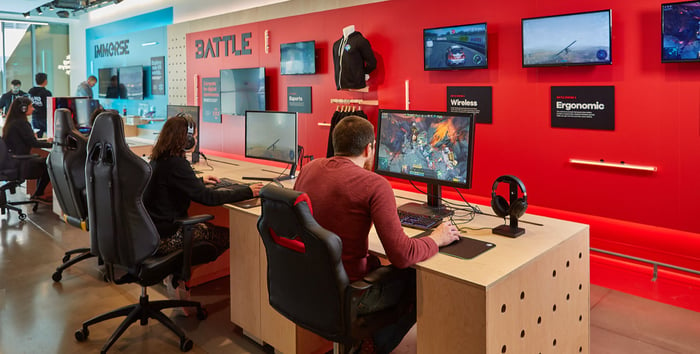 The leading edge of revolution

The department store chain opened The Game Room on the site of its Target Open House location, a San Francisco concept store that previously housed an Internet of Things collection of connected home gadgets and devices since 2015.

Many of those devices, which were virtually unknown or confusing when first introduced, have since gone on to become commonplace and make their way to Target's store shelves, such as Nest thermostats, Tile bluetooth key finders, or GE Link smart bulbs.

Since those aren't quite so revolutionary any longer, Target is taking aim at the growing digital gaming market, which data analytics firm Newzoo says is a $68 billion global opportunity and growing. It expects the market to hit almost $94 billion by 2022, an 11% compounded annual growth rate.

The Game Room lets gamers get hands-on experience with the latest technologies. Different areas allow you to become immersed in video gaming's future, such as letting users livestream their game play via Mixer, a competitor platform to Amazon's Twitch; access Apple Arcade and Google Stadia via the provided smartphones and tablets; or explore virtual reality and augmented reality through new Oculus Quest VR headsets from Facebook.

There will even be space available to host tournaments, and the store will allow companies to partner with it to showcase or launch their digital gaming products. In the process, they will be able to receive direct feedback from Target shoppers.

Counting on being different

Because the experimental and experiential store is just one location, and considering GameStop has about 5,600 stores worldwide, Target's Game Room isn't exactly an existential threat, but it's what it represents that will be GameStop's undoing.

GameStop is betting on a massive store remodel program to keep itself alive by attracting gamers to its locations to come in and play with the latest equipment and online games.

Rather than banks of video games lining its walls, big screen TVs with gaming chairs in front of them are being installed so customers can sit down and actively use the devices and experience the gameplay first hand.

But Target's not alone in trying to tap into the online gaming world. Teen and tween retailer Five Below invested in Nerd Street Gamers, an infrastructure company that builds facilities called Localhosts that let gamers use pro-level equipment to play in live, in-person events, and the retailer is building stores adjacent to these centers.

What this means is that while GameStop used to be the go-to retailer for video games, the advent of online gaming and digital downloads dispersed its customer base and now anyone, even a department store, can become a hub for gaming activity.

That just further chews away at GameStop's viability, so that even if it does hang on till the console upgrade cycle kicks in later this year, it may have come too late to save the video game retailer.