Please ensure Javascript is enabled for purposes of website accessibility
Log In Help Join The Motley Fool
Free Article Join Over 1 Million Premium Members And Get More In-Depth Stock Guidance and Research
By Harsh Chauhan - Mar 11, 2020 at 8:05AM

The novel coronavirus outbreak has taken a toll on the stock market in recent days as several companies have already warned investors that company finances will take a hit on account of the epidemic. Investors have been taking funds out of the market, worrying that the profits they made last year could soon disappear if the spread of COVID-19 is not brought under control. 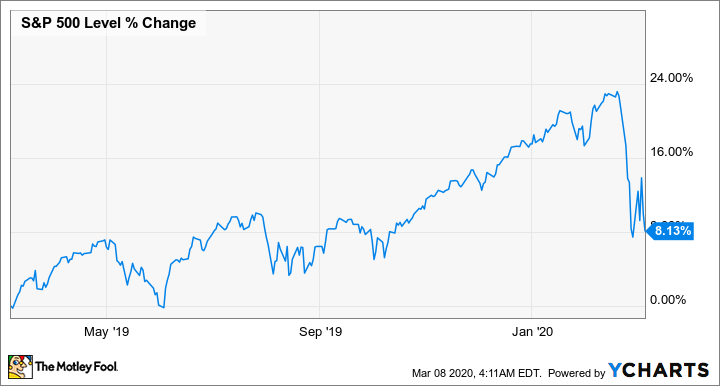 But at the same time, there are stocks that could help investors make money despite the COVID-19 headwind. Marvell Technology Group (MRVL -2.25%) is one such stock that deserves a closer look as its latest quarterly results prove its resilience amid the outbreak.

Marvell shareholders applauded the company's latest quarterly report as it easily beat Wall Street's estimates. But the more impressive thing to note was that Marvell's guidance turned out to be better than expectations even after taking into account the potential impact of the coronavirus outbreak.

Marvell expects $680 million in revenue in the current quarter compared to the consensus estimate of $672 million. The company says the novel coronavirus outbreak will hurt its top line to the tune of 5% in the first quarter of fiscal 2021. Even then, the company expects its revenue to increase almost 3% annually, assuming it hits the mid-point of its guidance range.

Investors, however, should not read much into Marvell's year-over-year revenue comparisons as the company sold its Wi-Fi business last year for $1.76 billion. That business was generating $300 million in annual revenue. Marvell also made a couple of acquisitions -- Aquantia and Avera -- last year for a total outlay of just over $1.05 billion to boost its capabilities in the 5G, data center, and automotive verticals. Marvell management's words over the latest earnings conference call seem to have assured investors that the company is heading in the right direction.

"Prior to the outbreak gaining intensity, our bookings and backlog were getting stronger going into fiscal year 2021, driven by our own product cycles such as the start of our 5G product ramp, our success in nearline drives and a recovery in our core business," CEO Matt Murphy said.

Murphy also added that the trade deal between the U.S. and China has led to an improved business environment. However, he did add that the COVID-19 outbreak is disrupting its supply chain. But this didn't discourage Marvell investors from bidding up the stock post-earnings as it announced a slew of positive developments related to 5G (fifth-generation) networks.

The 5G catalyst is ramping up

Marvell's 5G business has started gaining momentum, going by the comments made by management on the earnings call. The company is supplying baseband processors to Samsung and won business from Nokia to improve the performance and reduce the power consumption of the latter's 5G chips.

Some might question if these wins will be any good in light of the ongoing epidemic. Analysts expect the 5G rollout to be delayed as a result of the outbreak. But the situation on the ground appears to be different.

In China, for instance, all three major telecom companies are going ahead with their 5G rollout, the South China Morning Post reports. The country's telecom operators are expected to deploy a total of 550,000 base stations this year, per IDC's estimate. That would be a big improvement over the 130,000 5G base stations Chinese carriers had installed last year.

As Marvell depends on China for a big chunk of its revenue, it won't be surprising to see the company maintain its 5G momentum in the coming quarters. What's more, Marvell's partner Samsung has struck a deal to roll out 5G networks in New Zealand. It has also been involved in deploying the next-generation networks in South Korea for over a year now.

Marvell's partnership with Samsung has been fruitful for the former so far as deployment in South Korea had led to an early ramp-up of Marvell's 5G business last year. So, it won't be surprising to see the same happen in other markets as well.

What's more, Samsung has managed to corner a big share of the 5G equipment space. According to a third-party research report, the company held 37% revenue market share of the 5G radio access network space for the six-month-period spanning the fourth quarter of 2018 and the first quarter of 2019.

This bodes well for Marvell's 5G business, which may be able to sustain its momentum in the coming quarters despite the COVID-19 outbreak and remain a top stock to take advantage of the next-generation networks.