Mission: Save the economy. Mission...not accomplished.

What do these four companies have in common? Exactly one thing.

Cintas rents uniforms to companies whose employees wear uniforms. Proto Labs prints 3-D prototypes for companies preparing for production runs. Darling makes ingredients that go into (people) food and (animal) feed. Waste Management -- well, it throws away the detritus from the other companies' activities, and for the American economy at large.

And all four stocks are down big-time today.

In early trading Thursday, shares of Cintas, Proto Labs, Darling, and Waste Management all tumbled more than 10%. (Indeed, at one point Darling was down nearly 18%.) All four stocks have since recovered somewhat, but as of 1:20 p.m. EDT, Cintas shares still cost 9.6% less than they did at yesterday's close, Waste Management is down 7.7%, Proto Labs 8.4%, and Darling 15.7%. 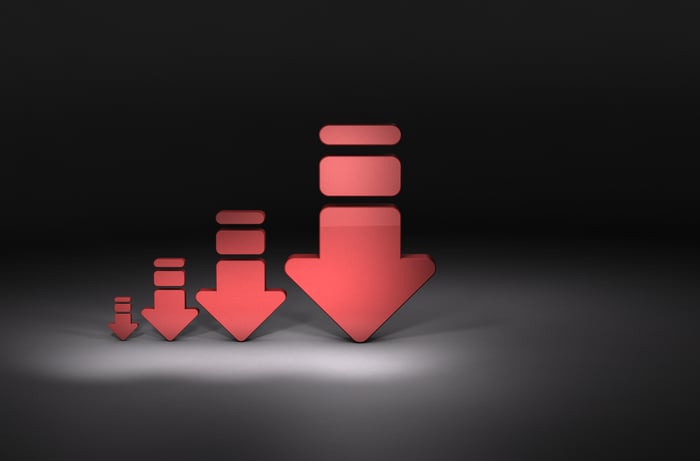 What's the frequency, Kenneth? Why are stocks serving such disparate industries, ranging from trash to uniforms, performing so uniformly badly today? That's a question best addressed to President Trump, who went on television last night to announce the steps his administration plans to take to stem the spread of the novel coronavirus, and attempt to right the American economy. Among them:

And if all that fails to do the trick: "unprecedented" emergency action "to provide financial relief" to "working Americans [who] are impacted by the virus."

But it didn't work. President Trump's intentions may have been good, but the effort to calm the nation's jagged nerves fell flat on its face this morning. Whether this was because the numbers weren't big enough, or the relief not targeted enough -- or because the numbers were so big and the measures so broad as to frighten investors with the scale of the problem -- is impossible to say.

All we can say for certain is that the net result of last night's announcement was a stock market sell-off this morning.

The good news is that in afternoon trading, stock markets are at least off their lows of the day, and recovering somewhat. The bad news is that stock prices are still down...a lot. As of today, the Dow Jones Industrial Average is officially down 25% off its peak, and the NASDAQ Composite down 24%. Unless things change in a hurry, the stock market is going to end today firmly in bear-market territory, potentially signaling the start of the next recession.