The stock market started the year on a solid note, but the positive vibes have vanished in recent weeks, as the spread of the novel coronavirus has triggered a massive sell-off. The Dow Jones Industrial Average has crashed about 7.5% over the past month as investors fear the financial implications of the epidemic.

Apple (NASDAQ:AAPL), Microsoft, and HP are among the many companies that have already warned that the COVID-19 outbreak will dent their short-term financial performance. Not surprisingly, many investors have pressed the panic button in a bid to cut losses and book profits. But this has opened up an opportunity for savvy investors to buy top tech stocks at a time when most are selling.

The likes of Apple and NVIDIA (NASDAQ:NVDA) are looking attractive in light of the recent sell-off. What's more, they could become more attractive if the downturn continues. Let's take a closer look at these two stocks and how they might fare in the coming months.

1. Apple stock is taking a breather before the next rally

Apple shares have been in pullback mode ever since the iPhone maker slashed its fiscal second-quarter revenue forecast on account of the coronavirus outbreak. The company pointed out that the shutdown of many of its own stores (as well as partner stores) in China, will hurt iPhone sales. At the same time, Apple's China-based supply chain has been ramping up at a slower-than-expected pace, which is expected to hamper production.

Investors were spooked by this guidance and sold Apple stock. But in the process, Apple stock is now cheaper than it was earlier this year. 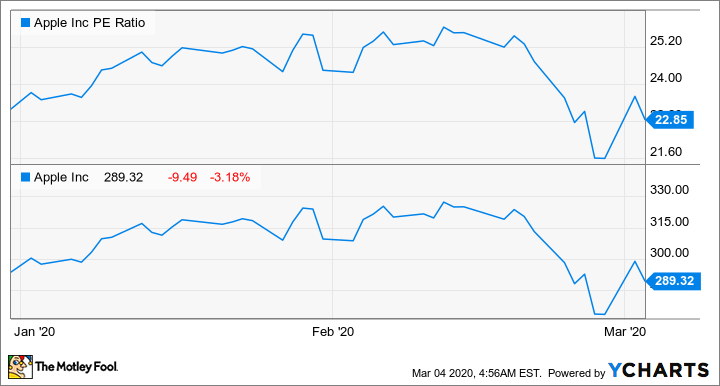 Its trailing price-to-earnings (P/E) ratio of less than 23 is now lower than the 2019 average of nearly 25. Of course, Apple will face short-term headwinds because of the COVID-19 outbreak, but investors shouldn't ignore the positives.

For instance, Apple's manufacturing operations lie outside the Hubei province (from where the virus originated in Wuhan). Its supply chain is already back in action, as Apple pointed out that "all of these facilities have reopened." The company's primary contractor, Foxconn, recently updated that the production of Apple products in China should return to normal by the end of March.

Foxconn's factories are reportedly running at 50% capacity now, indicating that the coronavirus outbreak is going to have a significant impact on Apple's performance this quarter. But once production hits normal levels, Apple's prospects should start looking up, as it is sitting on a tremendous opportunity in the form of 5G smartphones.

The company is anticipated to launch a range of 5G iPhones this year at different price points. Additionally, Wedbush Securities reports that more than a third of Apple's 900 million iPhone installed base is ready for an upgrade this year. As a result, demand for Apple's iPhones should return to normal in due course.

But investors need to be prepared for short-term pain as China supplies 17% of its total revenue. That could dent Apple's financial performance and share price if the fallout of the novel coronavirus continues for a prolonged time. However, further stock price weakness could make Apple stock cheaper, giving long-term investors looking to take advantage of the 5G revolution better opportunities to buy the stock.

NVIDIA stock's terrific rally over the past year had made the stock quite expensive despite a tepid financial performance. Investors kept buying the stock, even though NVIDIA was going through a difficult time, anticipating that a turnaround is just around the corner.

The good news is that the turnaround has arrived as the company crushed expectations last quarter. But its shares have still been going south as part of the coronavirus-induced broader market sell-off. 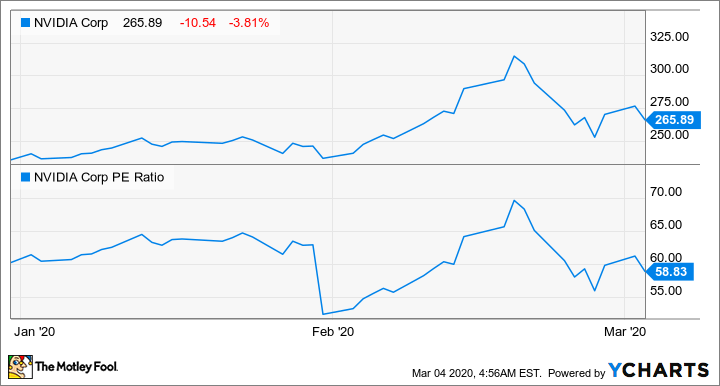 But there is a silver lining that investors shouldn't miss. NVIDIA stock is now trading at around 58 times earnings. The stock was valued at around 70 times earnings in February, but the steep decline in the stock price has made it more affordable now.

On a forward P/E basis, NVIDIA now trades at 34 times earnings compared to its five-year average multiple of 30x. This makes NVIDIA stock an attractive bet right now, as the graphics specialist has just returned to growth.

Its top line was up an impressive 41% last quarter, while adjusted earnings per share shot up a whopping 136% annually. For the current quarter, the company has reduced its top-line outlook by $100 million to account for the potential impact of the COVID-19 disease. Still, NVIDIA anticipates $3 billion in revenue in the fiscal first quarter, which would be a massive jump of 35% over the prior-year period.

This indicates that NVIDIA might be capable of tiding over the short-term challenges presented by the coronavirus outbreak.

Meanwhile, investors shouldn't ignore the two key tailwinds NVIDIA is sitting on: gaming and data centers. The company controlled nearly 69% of the discrete graphics card market at the end of 2019, as per Jon Peddie Research. Though it did lose significant market share to rival Advanced Micro Devices on a year-over-year basis, NVIDIA is reportedly gunning for a comeback with its next-generation cards.

The company is expected to launch new graphics cards based on the 7-nanometer manufacturing process this year. Taipei Times reports that they could be 50% faster than NVIDIA's current lineup and consume half the power. So don't be surprised if NVIDIA gains on AMD later this year, thanks to new graphics cards.

The data center business is another bright spot for NVIDIA. This segment's revenue was up 42% annually last quarter, and it now supplies 31% of the total revenue.

As it turns out, demand for data center accelerators (including graphics processing units) is expected to clock a compound annual growth rate of 49% through 2025, according to Mordor Intelligence.

NVIDIA is preparing itself to take advantage of this trend through more powerful data center-specific GPUs (graphics processing units) that could deliver a 70%-75% bump in performance.

Apple and NVIDIA have become more affordable than they were earlier this year. But they could become cheaper if the novel coronavirus-induced sell-off continues. As such, investors may get a better entry point if the outbreak is not tamed quickly.

But once that happens, these two could regain their mojo and become top growth stocks in the future, thanks to the catalysts they are sitting on.