The current market sell-off provides investors an opportunity to buy Cisco and two other tech stocks for a lower valuation multiple.

The equity markets are in turmoil due to the outbreak of the dreaded COVID-19 and the oil price war between Russia and Saudi Arabia. Broader indexes such as the Dow Jones and S&P 500 are trading roughly 25% below their record highs. On March 9 alone, both these indexes fell close to 8%, wiping out billions of dollars in investor wealth.

There are concerns that the virus outbreak will drive global consumer demand significantly lower. Several firms, including Apple, Microsoft, Visa, and Mastercard, have lowered their guidance for the upcoming quarter. While companies expect to tide over this short-term headwind, the recent pullback in stock prices has made several stocks attractive to contrarian investors.

Here we look at three such tech stocks that might have overcorrected and may very well beat broader markets in the next few months. 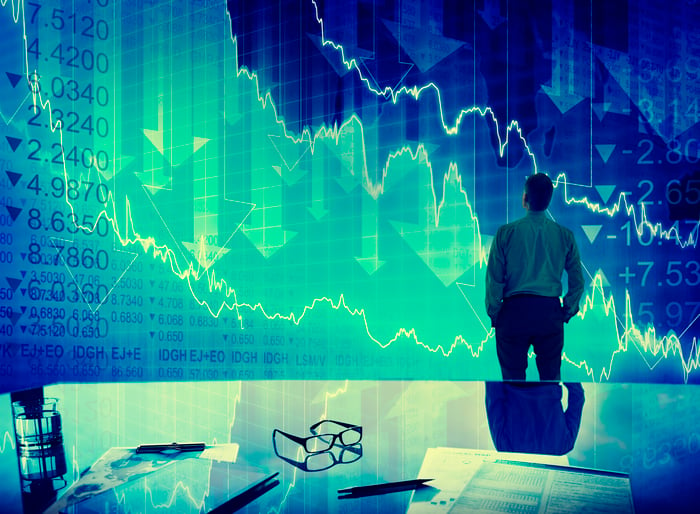 Cisco is trading more than 40% below its 52-week high

The networking giant has grossly underperformed broader markets in the last year. The stock is down more than 35% since March 2019, compared to the S&P 500 decline close to 12%. Cisco (CSCO -0.09%) shares fell 14% in February 2020 after it reported modest second-quarter results last month. Company sales were down 4%, while adjusted earnings per share rose 5% year over year and were in line with estimates.

However, Cisco's consensus estimates for the January quarter were lowered after the company raised concerns over slowing enterprise demand in major growth markets. While Cisco stock fell in 2019 due to trade tensions and a slowing macro environment, it has declined further in 2020, driven by a broader market sell-off.

The recent weakness in equity markets has meant Cisco's forward dividend yield now stands close to 4%, compared to its five-year average of 3%.Despite slowing revenue growth, Cisco raised its quarterly dividend by 3% to $0.36 a share.

Furthermore, Cisco is shifting toward a software and services business model, which will result in a solid stream of recurring subscription revenue as well as higher margins. The global rollout of 5G wireless networks will also drive networking sales higher over the next two years.

Cisco is trading at a forward price-to-earnings multiple of 12, and with the company's five-year earnings growth pegged at almost 7%, the valuation seems more than reasonable.

Another networking heavyweight, Arista Networks (ANET -0.35%) has lost momentum in the last year after touching a record high in April 2019. The stock is trading 51% below its 52-week high because of weak enterprise sales. It lost close to 25% in a single day last November after the company slashed guidance during its third-quarter earnings call.

Arista Networks is all set to experience a year-over-year decline in sales for the first time in 2020. While analysts expect sales to fall by roughly 1.7% this year, EBITDA (earnings before interest, taxes, depreciation, and amortization) and operating profit might decline by 9.6% and 9.3% respectively.

During the company's fourth-quarter earnings call, Arista did not provide guidance for the current year, further raising investor concerns. For the March quarter, Arista forecast sales between $522 million and $532 million, which will mean a decline of 11% at the midpoint estimate. In case tech giants such as Microsoft and Facebook (both major clients for Arista) lower spending, actual sales might very well be below company estimates.

Arista is still a major player in the global switch market with a share of 7.6%, according to market research firm IDC. It is well-positioned to make a comeback as revenue growth is expected to accelerate in 2021 and beyond. Analysts expect company sales to approach $3 billion by the end of 2022, and earnings are expected to rise by 15.5% next year.

Arista stock is trading at a forward price-to-earnings multiple around 25, which can be considered expensive. However, if the company manages to stage a comeback and return to revenue growth, the stock is bound to move higher.

As of this writing, shares of Palo Alto Networks (PANW 2.90%) are 44% below record highs. This cybersecurity behemoth is trading lower on the back of less-than-impressive quarterly results coupled with the broader market sell-off.

Palo Alto Networks missed its revenue guidance for the quarter ended in January 2020. In the second quarter, the company's sales grew by 15% year over year, lower than its sales forecast that estimated growth between 18% to 19%. For fiscal 2020, PANW revised its sales growth lower to between 16%-17%, compared to the prior growth estimate of 19%-20%.

PANW is struggling with decelerating revenue growth in a market that has a huge number of players. Furthermore, several enterprise customers are now shifting from legacy products to the cloud and next-gen products, which has resulted in lower-than-expected sales for the company.

Over the years, PANW has focused on inorganic growth to gain traction in the cloud security space and to complement its legacy portfolio. This strategy has helped the company gain customers and drive top-line growth at a robust pace.

Compare this to PANW's forward price-to-earnings multiple of 24 for FY 2021, and we can see that the stock can move higher from current levels if it manages to beat Wall Street estimates. Despite growing competition, PANW still remains one of the top players in the cybersecurity space.

The three tech stocks have been struggling for reasons other than the market sell-off. Cisco, Arista, and PANW have all lowered their guidance for the next few quarters. In case the coronavirus outbreak drags broader markets lower, these stocks can lose significant market value.

However, all three companies have a strong market presence, are leaders in their respective industries, and can create wealth for long-term shareholders.