Please ensure Javascript is enabled for purposes of website accessibility
Log In Help Join The Motley Fool
Free Article Join Over 1 Million Premium Members And Get More In-Depth Stock Guidance and Research
By Rich Duprey - Mar 13, 2020 at 10:46AM

Customers have more options than ever when ordering out for food.

A lack of customers loyal to Grubhub's (GRUB) food delivery app might not be the only cause of its troubles. Fewer people are also downloading those apps in general, and even more are using them less often.

Despite more restaurants and food service organizations adding delivery as an option, the extreme levels of discounting the delivery companies engaged in to gain market share might be taking a toll. And since companies can't sustain that kind of promotional environment perpetually, the dwindling availability of discounts is turning off customers. 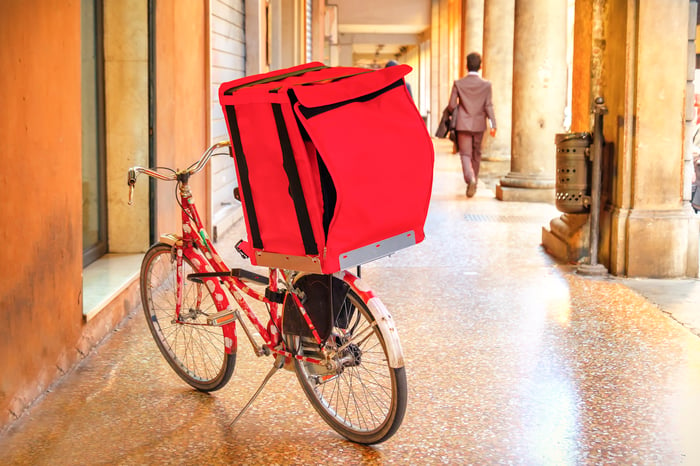 Between January 2015 and the peak in May 2019, Apptopia found that the combined number of sessions on the mobile apps of DoorDash, Grubhub, Postmates, and Uber (UBER 2.95%) Eats grew over 2,600%.

During that time DoorDash has gone from being the smallest player in the market, with a 17.6% share, to the biggest, owning nearly half the market, or 48.4%. Uber Eats, which didn't even launch until March 2016, has grown to become the second-largest player with a 21.5% share, while Postmates is third at 18.4% and Grubhub comes in last at 11.6%.

Yet the number of monthly active users (MAU) on these apps is in decline, dropping 13.3% since last May, while the number of sessions have plunged 17.7% since then.

Apptopia clarifies that its definition of MAU is not the same as the metric "active diners" Grubhub reports, as the latter represents anyone who has placed at least one order over the past year while its metric looks at users who have opened an app at least once during a particular month.

That makes things even worse for the food delivery companies because customers are using more than one app to price shop delivery costs. This means app sessions might be artificially inflated, as they're not necessarily resulting in sales.

Subscriptions to lock in customers

Grubhub CEO Matt Maloney described the phenomenon undermining its growth as "promiscuous" customers who were no longer loyal to any one app, but Apptopia notes that's because food delivery is a very expensive option for customers who are largely price-sensitive. Using discounts might have gotten a customer in the door, but they'll develop a wandering eye once the promotions fade.

The industry has responded by developing delivery subscription programs, such as DashPass and Eats Pass. Grubhub just launched Grubhub+, which seeks to offer Amazon (AMZN 3.58%) Prime-like benefits of unlimited meal delivery for a fee of $9.99 per month.

That's similar to DoorDash's program, while Uber Eats subscribers get free delivery and 5% off orders over $15 for $9.99 per month.

Carrying on over carryout

Another potential threat is the proliferation of carryout orders by restaurants. Although chains may offer delivery, they are emphasizing the benefits of carryout orders, which in many instances are just as convenient for customers at lower costs.

For example, Domino's (DPZ -0.40%) implemented a store expansion plan called "fortressing" that seeks to inundate a market with numerous, overlapping pizzerias. Even if the store build out results in cannibalizing sales at a particular restaurant, the ubiquity of the storefronts means greater mindshare with customers and higher sales for the company as a whole, as a Domino's being blocks away in any direction becomes a convenient stop.

Delivery is not going away. Restaurants are also under pressure to attract customers and need to offer as many options as possible, much as retailers have learned that an omnichannel approach best meets the needs of shoppers.

The coronavirus outbreak is also proving the worth of food delivery, as fewer people may dine out, choosing instead to have the food delivered, but left at the door, of course.

Yet the broad availability of food delivery apps and the variety of ordering options means the market may be saturated, and Grubhub and the others may have reached their upper limits of utility.