Please ensure Javascript is enabled for purposes of website accessibility
Log In Help Join The Motley Fool
Free Article Join Over 1 Million Premium Members And Get More In-Depth Stock Guidance and Research
By Rich Duprey - Mar 14, 2020 at 6:00AM

The Mexican restaurant chain wants to create a new category of fast-food dining.

Taco Bell has big plans for its tech-forward Cantina restaurants, with an intention to shake up the quick-serve space with what it's calling a "fast social" style.

The Mexican food chain is making the restaurants both more experimental and more experiential, a key growth initiative by Yum! Brands (YUM -0.08%) as it attempts to fashion Taco Bell into a $20 billion brand by the end of the decade. 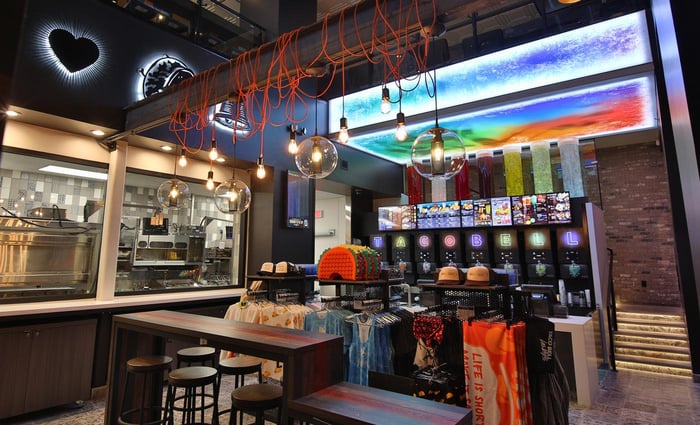 Putting the social into fast food

The higher-end, urban-oriented Cantina is positioned as a fast-paced, tech-heavy chain featuring self-order kiosks and digital menu boards. Yum! Brands opened its 60th store in the fourth quarter, but eventually, it will be expanding the concepts into its 7,000 traditional Taco Bell restaurants.

What currently differentiates Cantina from other Taco Bells is the absence of a drive-through window, which currently represents 70% of its business. Instead, the restaurants are designed for cities with high levels of foot traffic and feature open kitchens, custom menus with shareable appetizers, and alcoholic beverages such as beer, wine, sangria, and alcohol-infused icy drinks called Freezes.

The idea behind Cantina is to have customers stay and socialize, so they're also loaded with lots of charging stations for mobile devices. The Las Vegas location also includes a VIP lounge and a DJ booth, and in true Vegas style, there's a wedding package available.

This move also suggests Taco Bell may be trying to make the concept more than a buzz-worthy catchphrase. It looks to be fast food with a highly social atmosphere. Although remaining mum on exactly how it plans to achieve a lot of its lofty goals, Yum! Brands said two new Cantinas highlight the direction it intends to take.

At the Times Square location in New York City, Taco Bell promised to infuse technology into the restaurant by utilizing new digital features for a smoother ordering experience, as well as showcasing digital moments throughout the store.

Similarly, its San Ramon, California, restaurant would see the fast-social concept become "centered around gaming." Whether that means it will just be a chance to play a few video games or will be more like rival Chipotle Mexican Grill, which is sponsoring an e-sports team, remains to be seen.

Gaming presents a big opportunity. Data analytics firm Newzoo says digital gaming is a $68 billion global opportunity and growing, and it expects the market to grow at an 11% compounded annual growth rate to hit almost $94 billion by 2022.

The meteoric growth trajectory has piqued the interest of numerous non-traditional gaming outlets to become more closely entwined. Toymaker Hasbro, for example, has become a major sponsor of video gaming tournaments. Teen and tween retailer Five Below invested in a gaming infrastructure construction company and is building stores adjacent to the Localhost gaming hubs. Most recently, Target announced it had transformed its San Francisco concept store into a game room where all of the newest technologies are available to sample.

A chance to experiment

Taco Bell's president and global COO, Mike Grams said, "We are once again pushing the boundaries of the traditional QSR dining experience by setting the stage for our 'fast-social' restaurants, which introduce dynamic dining rooms and lean into social gatherings."

While liquor licensing could become a challenge for some of the restaurants -- it was shot down for one in one Detroit suburb -- they could also test unique menus in some of the locations. For instance, Grams told CNBC that restaurants might innovate by offering an all plant-based menu.

Perhaps what Cantinas offer Taco Bell and Yum! Brands most is the chance to stand out and differentiate its quick-serve offerings in a way few other fast-food restaurants can. It may be exactly what's needed to turn Taco Bell into a $20 billion business.