Please ensure Javascript is enabled for purposes of website accessibility
Log In Help Join The Motley Fool
Free Article Join Over 1 Million Premium Members And Get More In-Depth Stock Guidance and Research
By Rich Smith - Mar 16, 2020 at 10:30AM

Quantitative easing has the opposite effect from what the government intended.

Brent crude oil futures crashed more than 10% in early Monday trading. At $30.56 per barrel (as of 10:25 A.M. EDT), the crucial international benchmark is now at its lowest level in more than four years. Brent prices last fell below $32 in February 2016.

Futures prices on American benchmark WTI crude oil fell 10.3% to $29.52. WTI prices haven't been this low in more than 18 years. 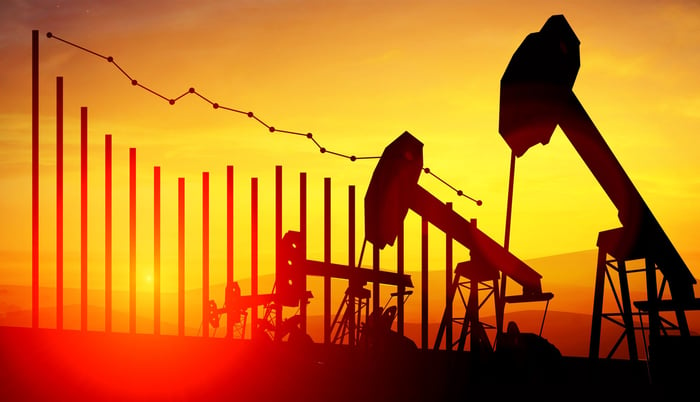 This is curious news on the first trading day after President Trump announced plans Friday afternoon, to make massive purchases of crude oil for the United States Strategic Petroleum Reserve, saying "we're going to fill it right up to the top."

Commentators cite two main reasons for the downward move. First, the continuing oil price war between Russia and OPEC, with Saudi Arabia responding to Russia's refusal to cut oil production by dramatically cutting the price of Saudi crude. And second, the Federal Reserve's decision to cut interest rates to as low as 0%.

The latter decision, announced Sunday, is aimed at injecting as much as $1.5 trillion in liquidity into U.S. markets to offset a downturn in spending as businesses close up shop and consumers cocoon to wait out the Coronavirus pandemic. Rather than reassure markets, however, it appears to have spooked oil investors with the implication that the economic situation is now so dire that only a revival of "quantitative easing" has any chance of ameliorating the damage.