Please ensure Javascript is enabled for purposes of website accessibility
Log In Help Join The Motley Fool
Free Article Join Over 1 Million Premium Members And Get More In-Depth Stock Guidance and Research
By Rick Munarriz - Mar 18, 2020 at 10:30AM

Chipotle, McDonald's, and Domino's have the right ingredients to survive and ultimately thrive in today's new normal.

These are unappetizing times for the restaurant industry. Chains are shutting down their dining rooms in the pursuit of pandemic containment, and limiting operations to takeout and delivery for those daring to stay open promises to be a profit-slurping endeavor. Everyone should be prepared for countless indie operators and even a few well-known chains to disappear by the time things return to normal later this year.

The shakeout will inevitably be a financial boost to the survivors, and with many of the industry's no-brainer survivors getting rocked, it's a great opportunity to load up on the publicly traded eateries built to outlast COVID-19. Chipotle Mexican Grill (CMG 3.06%), McDonald's (MCD 1.77%), and Domino's Pizza (DPZ -0.40%) have the right ingredients to thrive later this year, when the coast is clear. 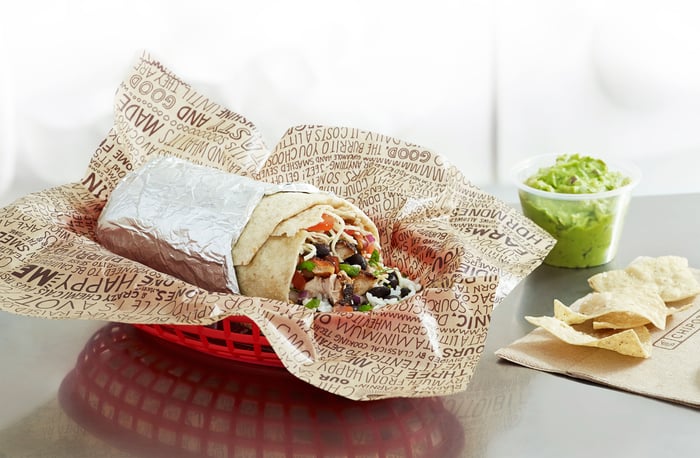 Chipotle recently overcome a different nasty health scare: the recent E. coli outbreaks. We're now a couple of years removed from the food-borne illness outbreaks that rattled the company that put fast-casual on the map.

Chipotle's turnaround has been a thing of beauty. It has rattled off eight consecutive quarters of positive and accelerating same-store sales growth, culminating in a 13.4% surge in comps for its latest quarter. It may have been a case of perfect timing when former Taco Bell chief Brian Niccol was tapped as the concept's new CEO two years ago, but he's been able to shake things up in a way no insider could have accomplished. The fact that he's been able to improve Chipotle's operating efficiency while also staying true to its original "food with integrity" mantra is the mother of all juggling acts. He's like Mandy Moore in this season of This Is Us, pulling off a master performance worthy of all of the industry rewards.

Chipotle is getting it done in the one revenue outlet that remains in play right now. Digital sales at Chipotle soared 78% in the fourth quarter and now account for nearly a fifth of total sales. Everything Chipotle has been doing -- from embracing third-party delivery apps to rolling out Chipotlanes (drive-thru windows) in new locations -- have situated the cult fave perfectly to cash in on the new normal. With the restaurant recession likely to wipe out many of the small knock-offs that have copied its assembly-line approach to fast-casual across different culinary specialties, business will probably be even stronger later this year than it was at the end of last year.

The world's largest burger chain has also executed a stunning turnaround in its reputation. The concept known for cheap junk food has ramped up the quality of its food and the availability of healthier offerings. The barbell approach to menu pricing means it's the same haven it's always been for cheap sustenance on one end, but on the other end, it's serving premium sandwiches, salads, and beverages to folks craving something else.

McDonald's is a giant, with systemwide sales topping $100 billion last year. Global comps rose nearly 6% in 2019, the concept's biggest store-level gain in more than a decade. Revenue declined for five straight years before turning slightly positive in 2019, but that was by design. The chain has spent the last few years handing over most of its company-owned locations to successful franchisees. McDonald's has become a money machine in the process, and it has returned $25 billion to its shareholders in the form of buybacks and increasing dividend distributions.

McDonald's is built for today's reality. It embraced delivery apps early, and it's a well-oiled machine on the drive-thru front. It has the cheap comfort food that will hold up well for however long the economic funk lasts.

It would be a crime not to include a pizza delivery specialist in the mix. After all, losing in-restaurant dining is no skin off of Domino's back. It was specializing in delivery and takeout long before those two revenue streams were the only two cards for the industry to play.

Domino's is a rare restaurant stock that's actually still trading higher in 2020, through Tuesday's close. Revenue and comps continue to move higher, and in an age where food and labor costs are climbing, it's still finding ways to grow its bottom line even faster than its top line.

It's in the right place at the right time, but it's still a leader in this new operating climate. It's one of the first players to embrace contact-less deliveries. As the industry shifts to digital, Domino's is already there with 70% of its business showing up on its screens that way. You're going to be eating a lot of pizza in the next few weeks, and Domino's will be there.

Chipotle, McDonald's, and Domino's get it. This is a scary time to be investing in restaurant stocks, but some concepts are better positioned to survive the calamity and come out ahead in the end.