Please ensure Javascript is enabled for purposes of website accessibility
Log In Help Join The Motley Fool
Free Article Join Over 1 Million Premium Members And Get More In-Depth Stock Guidance and Research
By John Rosevear - Mar 18, 2020 at 9:12AM

The company thinks the worst will pass by midyear.

German automaker BMW (BAMXF -1.29%) (BMWYY 0.35%) said that it will shut down its factories in Europe and South Africa until April 19, in response to lower demand and the need to help reduce the risk of spreading the COVID-19 virus.

The company also said that it expects sales and profit to drop significantly in 2020 as the coronavirus spreads through Europe and North America. But, it said, it thinks that the worst effects will happen in the first half of the year, with improvement later on.

The statements came at BMW's annual accounts press conference, at which it presented its full-year results for 2019 and gave what guidance it could for the uncertain year that lies ahead.

CEO Oliver Zipse said that the company began to shut down production at its plants in Europe, as well as its factory in Rosslyn, South Africa, on Tuesday. All will be closed by the end of this week. As of now, the production halt is expected to run for four weeks, until April 19, he said. 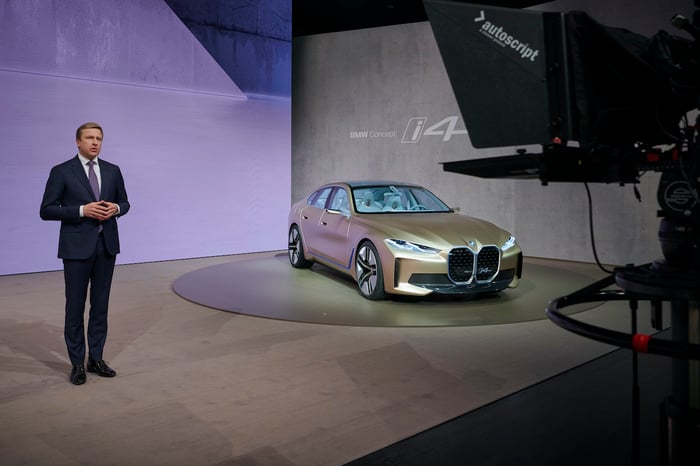 The Rolls-Royce factory in Goodwood, England, will suspend production for two weeks, starting next Monday, the company said.

Some BMW dealers in Europe have also closed, Zipse said. The company is also allowing employees who can work from home to do so, and has instituted more flexible work-time rules, he said.

Zipse said that while the need to keep employees healthy is a high priority, the factory shutdowns will also help the company match supply to demand. Auto sales in western Europe are already falling sharply as measures to slow the spread of coronavirus take hold.

(We don't have detailed March sales numbers for Europe yet, but auto investors should note that passenger-vehicle sales in China fell 80% in February, when anti-virus measures peaked in that country.)

What BMW's CFO said about the year ahead

CFO Nicolas Peter said that while it's hard to predict exactly how the coronavirus pandemic will play out, he was willing to give some rough guidance for the year ahead.

"Our original planning called for an EBIT [earnings before interest and taxes] margin of between 6 and 8% in the automotive segment for 2020," Peter said. "Due to the deterioration in the sales situation in China and an already visible similar development in other world regions, we anticipate a debiting effect especially in the first half year."

Specifically, for the full year, Peter said that investors should now expect:

Peter said that investors should expect further updates from the company as the pandemic situation unfolds.

BMW's earnings presentation was old news, to some extent, as the company had already released the key numbers from its fourth-quarter and full-year 2019 results last week.

In a nutshell: BMW's fourth-quarter operating income rose 32% from the same period in 2018, to 2.33 billion euros ($2.56 billion), on strong sales of higher-profit luxury models including Rolls-Royces and the BMW 8 Series.

Despite the good quarter, the company's full-year operating income was down 18% from 2018, because of higher research and development costs and fines paid earlier in the year to settle European Union antitrust charges.

But on balance, the result was good enough for the management team to propose a dividend of 2.50 euros per share of common stock, down from 3.50 euros last year.

If it's approved by shareholders in May, the dividend payout will total 1.65 billion euros, for a payout ratio of 32.8% -- within, but near the lower end of, BMW's longtime target range.