Please ensure Javascript is enabled for purposes of website accessibility
Log In Help Join The Motley Fool
Free Article Join Over 1 Million Premium Members And Get More In-Depth Stock Guidance and Research
By Jon Quast - Mar 22, 2020 at 11:50AM

Don't try to time the market, but pick up shares of exceptional companies while they're cheap.

It's not hyperbole to say we're in the middle of a historic market sell-off -- the data backs it up. Consider that the S&P 500 peaked at nearly 3,400 a month ago. Since then, it has cratered almost 30% as investors consider the wide-reaching ramifications of the COVID-19 pandemic. This sell-off is fast approaching the 34% drop of 1987 -- one of the worst bear markets in U.S. history.

Some want to invest but want to know if we've reached the bottom. However, that's a question no one can answer, and it doesn't matter anyway. Consider our last bear market: the Great Recession of 2007 to 2009. The S&P 500 would lose over half its value, but in the long run, it didn't matter whether you invested in 2007, in 2008, or at the bottom in 2009. 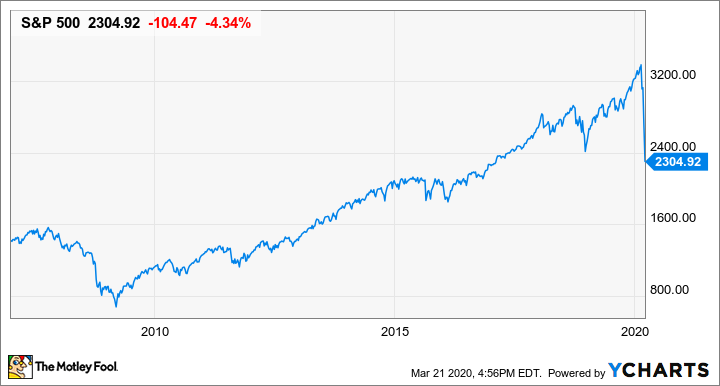 On the extremes, fear either keeps people from investing anything, since they believe the market will fall further, or they go all in when they believe it's bottomed. Both approaches can burn investors, since we aren't clairvoyant. Better to simply have a clear investing plan and methodically execute it whether the market is up or down.

In this historic time, I'm reminded of the wisdom of investing great Warren Buffett. Arguably his greatest investment came in 1987, during that scary bear market, when he bought shares of Coca-Cola. In Roger Lowenstein's book Buffett: The Making of an American Capitalist, he writes that Buffett believed Coca-Cola's stock, down at the time, was "as close to a sure thing as he had ever seen."

With that context, here are three stocks that I believe are "sure things" in the long run.

1. The cleanest balance sheet in the business

Energy drink company Monster Beverage Corporation (MNST 2.80%) is a great market-beating stock. If you back up to January 2007, before the Great Recession, Monster is still a nine-bagger stock. It gained a key distribution ally in Coca-Cola, which bought a 16.7% equity stake in Monster in 2014. Since then, Monster has seen its products go global with 2019 net sales hitting $4.2 billion, which generated $1.1 billion in net income.

This strong profitability helped pad Monster's now $1.3 billion of cash and short-term investments. The company also has no long-term debt. You'd be hard-pressed to find a stronger balance sheet for a company with a $30 billion market capitalization.

Granted, there's relatively low barriers to entry in the beverage sector, and Monster is constantly challenged by new competitors. For example, in its fourth-quarter earnings call, Monster management noted that newcomer Bang, owned by Vital Pharmaceuticals, had gained market share in January and controlled 7.6% of the energy-drink category. However, Monster energy still controls 40.9% across its various beverages and lost only 0.6% market share -- indicating Bang is stealing more from other players than from Monster.

Given its top-dog energy drink status, global distribution, strong balance sheet, and history of success, I'd say Monster has a good chance of beating the market going forward.

Because of the coronavirus, the travel industry has ground to a complete halt worldwide. That's devastating to travel reservation company Booking Holdings (BKNG -1.53%) since no one is currently booking anything. But this affects Booking's competitors as well and virtually prohibits new players from arising right now. And considering the company's portfolio includes properties like Priceline.com, Booking.com, OpenTable, and RentalCars.com, this is a network that can't be replicated overnight.

For 2019, Booking Holdings generated record revenue of $15.1 billion, which resulted in a whopping $4.9 billion in net income. The company was projecting more growth in 2020, but due to the coronavirus pandemic, it had to withdraw its first-quarter guidance. But assuming this present health crisis is temporary, Booking can weather the storm. It has $6.3 billion in cash and an untapped $2 billion in credit if things get tight in coming quarters.

When the travel industry returns to normal, it's likely that travelers will resume making reservations through one of Booking Holdings' many properties. There's no reason COVID-19 would dethrone Booking from its top status. And considering it trades at less than 11 times trailing earnings, you've never been able to call this a value stock more than now. 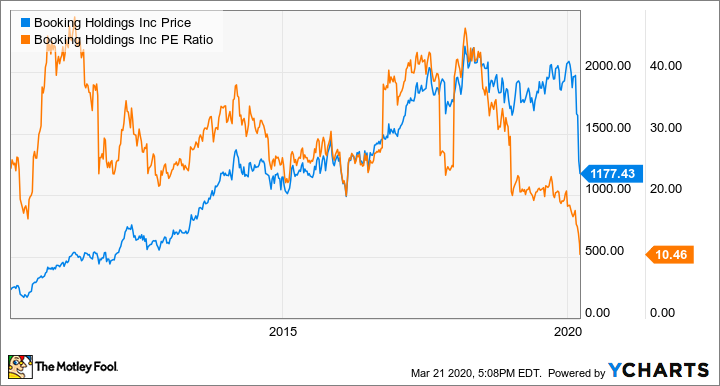 3. A coffee brand without equal

Coffee empire Starbucks (SBUX 0.12%) was hit harder than most during this bear market, due to the company's high exposure to China where COVID-19 originated. A full 13% of Starbucks' locations are in that market, and the company had to update investors on guidance as comparable sales in February plummeted 78%. At one point, 80% of Starbucks' China locations were closed.

Starbucks updated guidance to include a reduction of $400 million to $430 million in second-quarter 2020 revenue, but that was notably before COVID-19 had spread to the U.S. Now that the disease has disrupted businesses and lives in its home market, Starbucks is serving coffee only to drive-through and carry-out customers. That will likely hit its revenue even harder than China. On a related note, Keurig Dr Pepper is surprisingly reporting strong demand -- a mild suggestion that people are brewing more coffee at home during this time.

The market is swinging daily, but at one point, Starbucks' stock was down 50% from 52-week highs. I admit that the next couple quarters will be ugly for the company, as it will for many other restaurant chains, but with over 31,000 locations, unmatched brand recognition, and a global reach, it's hard to imagine a scenario where Starbucks doesn't survive this crisis.

If that's true, it's only a matter of time before Starbucks returns to operational excellence. For perspective, in 2019, it grew its store count 6.5% despite its already massive size and delivered 5% global comparable-sales growth. Earnings were admittedly down in 2019 at $2.93 per share on a GAAP basis, but it's still a wildly profitable operation that can reward patient shareholders for years to come.