Please ensure Javascript is enabled for purposes of website accessibility
Log In Help Join The Motley Fool
Free Article Join Over 1 Million Premium Members And Get More In-Depth Stock Guidance and Research
By Matthew DiLallo - Mar 25, 2020 at 8:38AM

These three companies should have no problems maintaining their dividends during the current economic downturn.

One of the many casualties of the COVID-19 outbreak has been dividend payments, especially those in the energy patch. Several companies in that sector have slashed their payouts in response to the crash in crude prices, following not only plunging demand from the outbreak, but also a price war between Russia and Saudi Arabia.

While investors expect that many more companies will reduce their payouts in the fallout from the outbreak, several can withstand this shock. Three dividends that should be safe are those of pipeline giant TC Energy (TRP), infrastructure operator Brookfield Infrastructure Partners (BIP), and utility NextEra Energy (NEE). 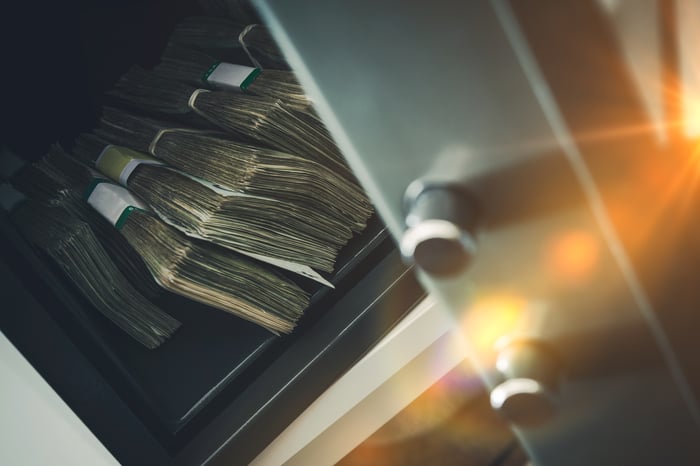 TC Energy operates a low-risk business model. The foundation is the predictable cash flow it produces thanks to the structure of its pipeline and electricity-generating operations. Overall, fee-based contracts and regulated rates support about 92% of the company's earnings. That leaves only about 8% exposed to commodity price volatility or volume fluctuations. Because of that, the slump in the energy market should have minimal impact on its earnings this year.

Meanwhile, TC Energy only pays out about 40% of its cash flow to support its dividend, which recently yielded more than 7% due to the sell-off in its stock price. The company reinvests the other 60% to expand its portfolio of energy infrastructure assets. TC Energy complements its stable earnings profile with a top-notch balance sheet, which includes an investment-grade credit rating and a leverage ratio below its targeted level. Those factors combine to put the company's payout on one of the firmest foundations in the pipeline sector.

Brookfield Infrastructure also has a relatively low-risk business model. It focuses on operating utilities as well as energy, transportation, and data infrastructure, most of which generate income supported by regulated rates and fee-based contracts, with about 95% of its annual earnings coming from stable sources. While it does have some volume-related businesses that the economic slowdown will impact -- mainly its port operations and toll roads -- they should rebound once the outbreak subsides.

Meanwhile, Brookfield has a conservative dividend payout ratio of around 60% of its cash flow, which gives it lots of cushion to maintain its now roughly 8%-yielding dividend. The company further supports that payout with a strong investment-grade balance sheet, which included $1.9 billion of liquidity -- cash and borrowing capacity -- as of the end of last year. That gives Brookfield the financial flexibility to take advantage of the current downturn to make needle-moving acquisitions, which it has successfully done during previous market dislocations.

At the top of its class

NextEra Energy, like Brookfield and TC Energy, generates stable income in good times and bad because regulated rates and long-term contracts at its utilities and clean energy operations supply the bulk of its earnings. While the temporary closing of many stores and other businesses will impact electricity demand, that should recover once the economy is up and running again.

NextEra's dividend -- which now yields more than 3% following the sell-off in its stock price -- can easily weather the short-term effect of the economic slowdown. That's because the company has among the lowest payout ratios in the utility sector, as well as one of the highest credit ratings in its peer group. Those factors give it the financial flexibility to maintain its payout even as it continues to expand its Florida-based utilities and its renewable energy operations.

The right characteristics to weather this economic storm

The COVID-19 outbreak is forcibly shutting down many parts of the global economy, which will impact nearly every business. However, companies that generate stable revenue and have strong financial profiles -- like Brookfield Infrastructure, NextEra Energy, and TC Energy -- are better insulated from the severity of this downturn. Because of that, they should be able to maintain their dividends during what will hopefully be a temporary issue.