Demand for at-home delivery is set to explode, and Walmart is still without a meaningful in-house delivery solution.

As difficult as it is to believe in the midst of coronavirus-mania, companies are still doing other things besides managing the fallout from the contagion. Granted, responding to COVID-19 is the priority, but organizations continue to plan for the day when the coronavirus outbreak is in the rearview mirror.

Case in point: A week ago, club-based retailer Costco (COST 0.55%) acquired delivery outfit Innovel from Transformco, which is closely affiliated with struggling retailer Sears. It even provides so-called "white glove" delivery and installation services for Sears' big-box items like appliances, mattresses, and television.

It's noteworthy for a handful of reasons, chief among them being that it gives Costco a means of solving shoppers' big impasse when it comes to something like buying a refrigerator. Secondarily, Innovel could be the seed of a operation that's equipped to handle smaller orders like groceries or toiletries. 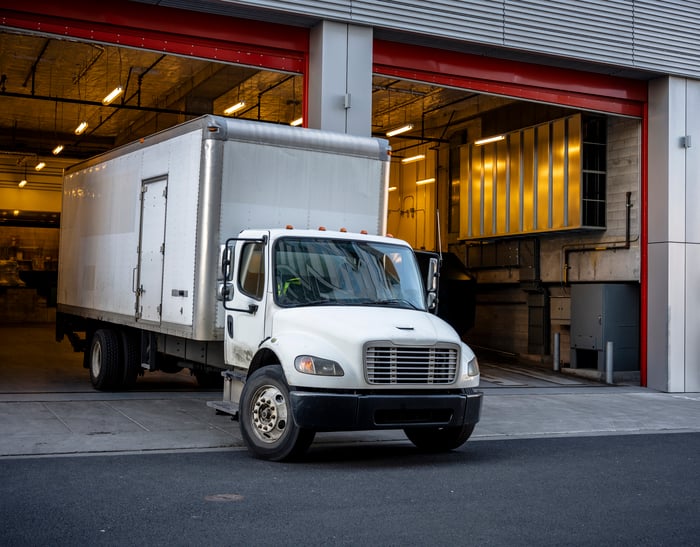 If the premise rings a bell, there's a reason. Retailers have effectively streamlined what's happening in stores and within their supply chains. The next big battleground is getting goods to shoppers' doors quickly. Amazon now offers same-day shipping on many grocery items for Prime members, while Walmart's same-day grocery delivery in select markets has been well received.

However, parsing out shopping and deliveries at the store level is generally inefficient without significant scale, and even when scale is created, it's difficult and expensive. In February, Skipcart abruptly decided it didn't want to do grocery deliveries for Walmart any longer. It was the fourth delivery partner in a matter of months to tell Walmart it wasn't worth the trouble. Meanwhile, Amazon's shipping costs far outpaced sales during the third quarter last year, and its heavy use of outsourced drivers is starting to prove legally problematic.

Still, as long as rivals like Amazon and Target (TGT 4.32%) -- which owns delivery service Shipt -- can cater to consumers at their homes, Walmart is expected to offer a comparable option.

Innovel could have been it, eventually.

What Innovel is and could become

Granted, it's not a perfect fit for a retailer looking to outsource the delivery of groceries and other small-ticket items. Innovel has more than 1,100 delivery trucks on the nation's roads every day, but those trucks were meant to carry furniture rather than bread or eggs. Even a cargo van along the lines of the ones used by Amazon Prime's third-party logistics drivers would be at least a little bit better suited for such ferrying.

On the other hand, Innovel's box trucks aren't exactly close cousins to the 53-foot trailers hauled behind the big rigs traversing U.S. roads. The company's trucks are often loaded with goods meant to be dropped off at multiple homes in a single day. Customers can even track the current location of their shipment with a tracking number, a la UPS or FedEx.

In other words, it's a platform a grocer or staples retailer could build on if and when that organization finally decided to bring such a logistics solution in-house. That's a big need for Walmart right now to be sure, which again, lost yet another grocery delivery partner in Skipcart just last month.

Delivery is still the biggest battlefront

Costco's exact plans for its $1 billion addition of Innovel are still unclear. Costco already uses Target's Shipt to handle deliveries to its members. It can certainly use access to its own box trucks and white glove service in the meantime to sell more washers and dryers. And there's no particular need to discontinue making deliveries for rival retailers. Innovel is a business venture in and of itself.

Nevertheless, surely Costco has to be weary -- and wary -- of relying on a competing business to serve its own customers for too long. Most important of all, note that this is the second major last-mile delivery acquisition that's taken shape since 2017 when Target acquired Shipt. Innovel isn't quite the same thing, but Costco could push it in that direction, giving the company an in-house option it has complete control of to compete with rivals.

Walmart, meanwhile, is struggling to just keep its fragmented stable of grocery delivery outfits in place. That matters as delivery is quickly becoming the next great differentiator.

Only the future will determine the effects of Costco's decision to act -- and Walmart's decision not to act. This isn't a challenge that's going to abate for the world's biggest retailer, though. In fact, it's only going to grow in scope. Even before the coronavirus outbreak, 10% of this year's grocery shopping was expected to be done online, according to numbers from Invesp. With shoppers now unable to get out, that leaves the window wide open for growth in deliveries.