Please ensure Javascript is enabled for purposes of website accessibility
Log In Help Join The Motley Fool
Free Article Join Over 1 Million Premium Members And Get More In-Depth Stock Guidance and Research
By John Rosevear - Mar 26, 2020 at 10:55AM

The company may try to reopen a few key factories in April.

In a letter to employees on Thursday, Hackett outlined a cost-reduction plan that includes a hiring freeze and pay cuts for executives, but -- at least for the moment -- no job cuts.

Separately, Ford also said it's going to try to reopen a few of its factories in the U.S and Mexico in April. 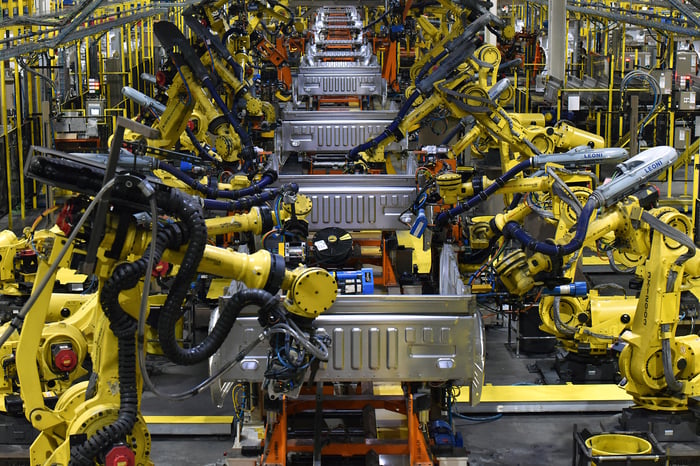 The Dearborn Truck Plant, which makes Ford's F-150 pickups, is one of several factories the company will try to reopen in April. Image source: Ford Motor Company.

What Hackett said about cost cuts

Hackett told Ford employees that he wants the company to have "a shared understanding of the principles" that will guide Ford's cost-cutting plans over the next several days:

Long story short: Ford's employees should expect some big cuts -- to spending and to ongoing programs -- in the next few days. But at least for now, nobody's job is in danger.

What Ford said about reopening plants

In a separate announcement on Tuesday morning, Ford said it is "aiming" to restart production at several of its factories in North America.

On April 14, Ford will resume production at:

Ford will also reopen several parts-manufacturing factories that support those plants, it said.

The company noted that all of this depends on public-health conditions and its suppliers' ability to be ready on time, and said that it will adjust plans if necessary.

The announcement appears to have been a surprise to the United Auto Workers labor union (UAW). In a brief statement, the UAW said that it is reviewing Ford's announcement "with great concern and caution" and that the health and safety of its members (and the American public) remains its priority.

What does this mean for Ford investors?

First, we can think of Hackett's letter as a preview of cost cuts to come over the next several days. The reassurances about job cuts (that there won't be any right now) and salary deferments for senior executives were strong moves, showing good leadership at a tough moment. But we'll have to wait to see the details before we try to figure out the implications of the cuts that Ford plans to make.

Second, the moves to reopen factories seem premature to me. Have Ford's dealers actually been selling enough trucks (and sedans) over the last couple of weeks to justify restarting production? And why was the UAW apparently caught by surprise, given that Ford's relationship with the union is generally quite strong?

Long story short: There's nothing here that hurts the investment case for Ford's stock right now, but there are some puzzles and unanswered questions. We await more information.