Maintaining financial flexibility is key, and axing the shareholder payout is certainly an option.

Things could be better for the restaurant industry, one of the segments of the economy hardest hit by the COVID-19 pandemic. Many operators -- large and small -- have been reduced to primarily takeout and delivery-only business or even full closures. Already working with thin profit margins, that has put many companies under extreme pressure.

One such outfit is The Cheesecake Factory (CAKE -1.48%), which recently provided a shareholder update on operations. The good news is that off-premise sales already made up a substantial part of the company's revenue: 17% during the fourth quarter of 2019, to be exact. And industry researcher Black Box Intelligence reports that average off-premise sales for full-service restaurants increased 60% as of March 23 compared with a year ago.

The bad news, though, is that 27 of Cheesecake Factory's nearly 300 locations are completely closed until further notice. The chain has also needed to use short-term credit, adding to the already notable liabilities it incurred last year to acquire North Italia and Fox Restaurant Concepts during Q4 2019 -- which, incidentally, make up many of the company's 27 currently closed stores (only two of the closures are Cheesecake Factories). As of this writing, The Cheesecake Factory's dividend yields 7.3% a year, but value investors probably shouldn't make a purchase based on that payout. 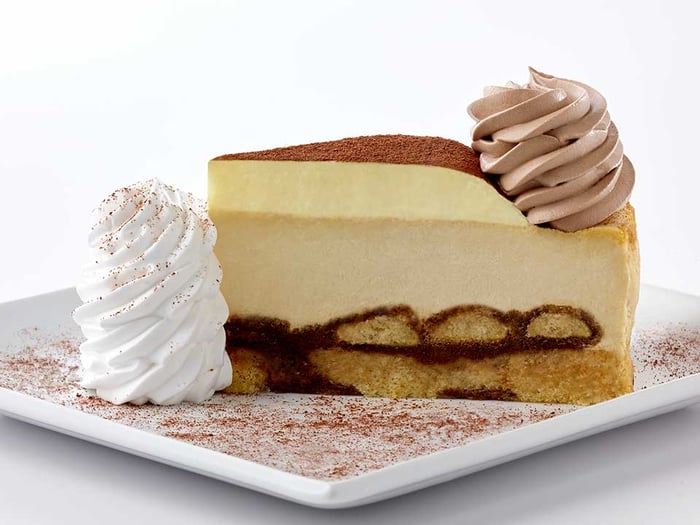 The cash crunch is real

Losing nearly 10% of operating locations (not to mention greatly reduced sales at existing ones) is a big deal, and that's what Cheesecake Factory is up against right now. In a letter to landlords first obtained by the website Eater, the chain said it wasn't going to be able to pay rent in April.

This compounds the situation that was explained in a shareholder update on March 23. The company said it was putting the brakes on its expansion plans for 2020 and drawing $90 million in cash from its credit facility to help bridge the gap between now and whenever normal operations can resume. Since Cheesecake Factory operates mostly in urban areas, including 39 locations in especially hard-hit California, "normal operations" might take a while to return.

Buy for the long haul, but probably not the dividend

The $90 million taken on credit makes sense because Cheesecake Factory ended 2019 with just $58.4 million in cash and equivalents on the books. Long-term debt totaled $290 million (compared with $10 million at the end of 2018), which it used to acquire the aforementioned chains late last year. Timing of the increased burden of liability could certainly have been better, but the spread of infectious disease, unfortunately, operates on its own timetable.

With interest expense headed up in the quarters ahead and profit margins headed down (if not negative), the $60.7 million in total dividends paid in 2019 looks at risk in 2020. Free cash flow -- what's left after cash operating and capital expenses are paid, and from which dividends are paid -- was $143 million in 2019. What was once a well-covered payment to owners of the stock now looks irresponsible given the slim cash position on the balance sheet.

That's certainly not to say this restaurant stock may not be a buy right now. Shares are down 50% year to date, and the company has survived difficult times since its founding in the 1970s. But buying for the dividend isn't the right move. Just expect it to be a very bumpy ride. For investors looking for it, a safer restaurant dividend at the moment, and a better value, is Texas Roadhouse (TXRH 0.14%).