These stocks have soared while the overall market tanked. But are they buys?

If you threw a dart at a dartboard covered with every stock ticker on the market, the odds are overwhelmingly in favor of you hitting a stock that's down so far in 2020. Only a few have managed to rise in the midst of the massive meltdown caused by the novel coronavirus pandemic. Even fewer have delivered impressive year-to-date gains.

But a handful of stocks have managed to swim against the tide in a spectacular way, more than tripling in less than three months. Here are the three most resilient stocks in the bear market today. 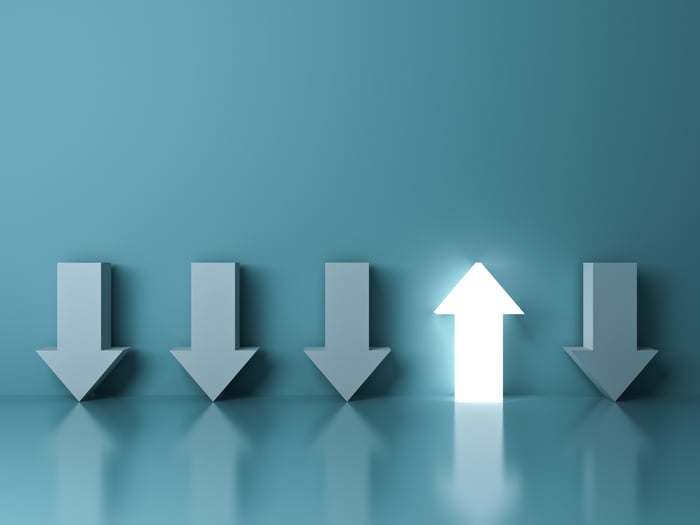 Shares of Co-Diagnostics (CODX -6.08%) have skyrocketed more than 920% so far this year. The stock first really captured investors' attention in January when the company announced that it had completed the core design for a novel coronavirus diagnostic test.

As the COVID-19 outbreak spread beyond China into other countries, Co-Diagnostics rapidly became one of the hottest stocks on the market. Its shares received a huge boost in late February when Co-Diagnostics announced FDA clearance for its novel coronavirus diagnostic test.

At one point in early March, Co-Diagnostics stock was up nearly 1,900% year to date. Although shares didn't remain at that lofty level very long, Co-Diagnostics remains one of the biggest winners in the current bear market, with the company launching its coronavirus diagnostic test quickly thanks to the FDA easing regulatory requirements.

Trillium Therapeutics' (TRIL) shares are up close to 290% year to date. And the meteoric rise for the biotech stock has nothing to do with the coronavirus at all. Instead, Trillium benefited from Gilead Sciences' (GILD -0.47%) announcement on March 2 that it plans to acquire Forty Seven (FTSV) for $4.9 billion.

Although Trillium hasn't been named as a potential acquisition target itself, Gilead's buyout of Forty Seven makes Trillium much more intriguing to investors. Both Trillium and Forty Seven are developing drugs that block CD47, which is a protein that signals to the body's immune cells to avoid destroying cancer cells.

The CD47 programs of Forty Seven and Trillium aren't too far apart in terms of development progress. With Gilead valuing Forty Seven so highly, it's not surprising that Trillium has been a huge winner. Even after its big gains, the company's market cap is still only around $300 million.

Novavax (NVAX -8.19%) ranks as another very resilient biotech stock as the market has dropped. Its shares have more than tripled due to a couple of big developments.

First, Novavax has emerged as a favorite for investors because of its coronavirus vaccine program. The company announced on Feb. 26 that it expected to begin clinical testing of its experimental vaccine for protecting against novel coronavirus disease COVID-19 by late spring. Novavax's previous experience developing vaccines for MERS and SARS, which are also members of the coronavirus family, gave it a solid foundation from which to start.

I'm skittish about investing in two of these high-flying stocks. But I like one of them.

Co-Diagnostics faces plenty of competition in the coronavirus testing market. Demand is so great right now that all of these companies should be successful. However, that dynamic won't last forever.

Although I think Trillium's CD47 program is promising, the biotech is still only in early stage testing. There's a long way to go. There's also no guarantee that Trillium will be bought out like Forty Seven.

That leaves Novavax. I've been a fan of Novavax for quite a while. Based on its positive phase 3 results for NanoFlu, I expect the company will ultimately win FDA approval for the flu vaccine and that it will be a commercial success. My view is that Novavax is a great acquisition target for bigger drugmakers. Even if it isn't acquired, I think the stock still has room to run.