Down as much as 65% during the coronavirus crash, shares of Texas Roadhouse (NASDAQ:TXRH) have been punished along with the rest of the restaurant industry. On one hand, that makes sense. Americans were spending more on eating out than at the grocery store in 2019, a short-lived statistic that was begging to get chopped down to size. Many players in the space were also opening up locations faster than they could fill up existing dining rooms, sacrificing healthy profit margins in a move to scoop up market share. It was the coronavirus pandemic that ended up providing the reality check, but something was eventually going to cause restaurants to tap the brakes.

Texas Roadhouse was not a bad industry player, though. Rather, for years the steakhouse chain has been focused on maximizing the performance of its existing locations and staying the course with its tried-and-true niche serving up sizable meals at a value in suburban America. Its rock-solid operating results will no doubt get dinged like everyone else in the dining-out space, and the rosy outlook for 2020 issued in February was withdrawn. Nevertheless, this is my top restaurant value stock to scoop up while the news remains ugly. 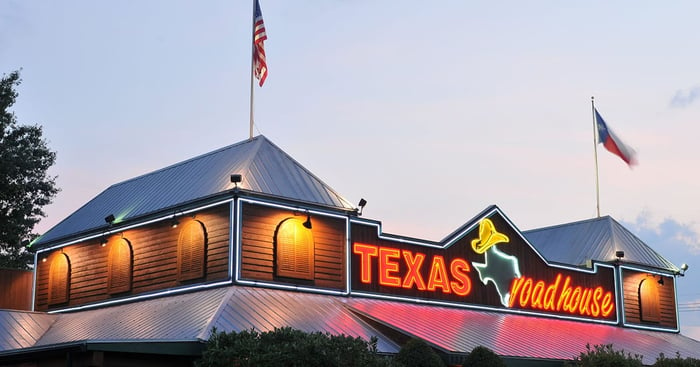 It's important to remember where the bulk of Roadhouse's 583 domestic locations (at the end of 2019) reside: suburban America. Granted, the whole U.S. restaurant industry has taken a hit regardless of location. According to researcher Black Box Intelligence, Americans have shifted 10% of their food spending away from dining out and directed it back to groceries, resulting in a 53% surge in grocery store sales for the week ending March 25 compared with a year ago.

There is some good news for restaurants, though. While it's the most densely populated areas (and, not incidentally, the cities hit hardest by coronavirus) Black Box Intelligence says are witnessing the steepest restaurant traffic declines, more sparsely populated areas are outperforming thus far. By and large, that's where Texas Roadhouse dwells, as it has steered clear of urban centers in keeping with its theme.

Plus, consumers are still eating out. Black Box Intelligence also reported off-premise sales are up 60% year-over-year the week ended March 25 for full-service chains. Texas Roadhouse said none of its domestic stores are completely closed, but those that can't operate dining rooms have shifted to to-go and curbside service. Roadhouse is thus in much better shape than others in its full-service peer group.

So what has the stock down in the dumps? In a word, uncertainty. The year started off strong with CEO Kent Taylor and his top team saying that comparable-store sales (foot traffic and average guest ticket size) had surged 6.4% higher through the first month and a half of 2020. And a full-year outlook for comparable store growth -- a figure that has remained positive for the chain for years even as the industry overall has wavered up and down -- could be out the window. Management took its guidance off the table in mid-March and will provide updates during the first-quarter earnings call.

Given the company's operating history and relative insulation from the worst of the pandemic, my money is on Texas Roadhouse coming out on top. The chain had zero debt and $108 million in cash and equivalents in the bank at the end of 2019 and recently took precautionary measures to make use of its short-term credit facility to boost that cash position to over $300 million. Opting to keep its new-location openings at a conservative 5% or so of the existing total count the last few years, this restaurant operator's discipline when it comes to expansion should pay off. Keeping a balance sheet in tip-top shape counts extra in times of crisis.

It would be pointless to talk about share valuation until there is more information, but Texas Roadhouse's precipitous drop with the rest of the restaurant industry looks overdone to me. A top performer for years, I plan on adding to my position in the coming weeks and months as the coronavirus crisis is worked through.