Digital advertising will be hit hardest, but there's still reason for investor optimism.

In late March, Twitter (TWTR -1.10%) released an update to investors withdrawing its previous financial guidance for the first quarter. The next day, Facebook (META -0.48%) said it's seen weakening in its ad business in the last few weeks. Google, the Alphabet (GOOG -0.69%) (GOOGL -0.72%) subsidiary, hasn't released any updates, but it's surely seen a big hit to its top line as well.

Overall, digital advertisers could lose over $45 billion in revenue this year from the impact of the novel coronavirus, according to estimates from Cowen analyst John Blackledge. Digital advertisers are most susceptible because they generate most of their revenue through self-serve platforms, where ad spend is easy to rein in.

While that means the decline in ad revenue for digital media companies will be significant, it also means they'll return to normal growth much faster. In fact, the ultimate impact of coronavirus could be an acceleration in shifting ad spend to digital platforms. 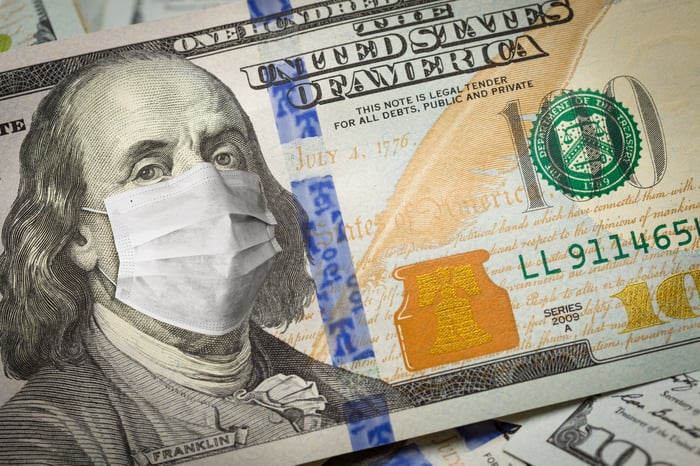 How bad is it right now?

Twitter was most forthright with how coronavirus has impacted its ad revenue since governments started asking citizens to stay home, forcing many businesses to close up shop at least temporarily. The company said it expects revenue to fall slightly. It previously forecast revenue growth between 4.8% and 12.5%.

January and February results were probably in line with Twitter's outlook, about 8.5% growth; management gave no indication otherwise. Based on a 2% year-over-year decline in revenue for the first quarter, that suggests March revenue fell around 23%.There's potential for second-quarter results to look worse than the drop in March, as social distancing efforts in the U.S. didn't ramp up until mid-month. It's also unlikely social distancing will subside for at least the first part of the quarter.

Facebook and Google might see similar revenue declines in the near term -- perhaps even more drastic ones, as they're more reliant on small businesses for ad revenue, and it's been a really tough environment for small business owners. Blackledge's full-year estimates suggest roughly equal percentage declines among the three digital advertising companies (around 18%).

As the world gets back to normal and businesses start reopening their doors to consumers, digital ad spending should enjoy a strong comeback. As marketers look to bring customers back quickly, digital ad campaigns represent the fastest route to reach them.

Moreover, the shift in ad budgets to digital advertising platforms could accelerate as marketers look to make their spending more efficient. Platforms like Facebook and Google can reach broad audiences with specific targeting, which makes them extremely valuable -- especially when trying to make the most of limited ad budgets.

Indeed, MAGNA Global expects the impact of coronavirus to hit linear advertising much harder than digital. The researcher sees linear advertising spend in 2020 declining 11.7% in its new forecast versus its previous estimate of flat ad spending. It only lowered its forecast for digital ad spending to 3.9% from 11.4%, a drop of 7.5 percentage points. And keep in mind that digital advertising spend is already a bigger portion of ad budgets, so it's not a matter of scale.

In other words, the big tech companies ought to bounce back much faster and win a larger share of ad budgets in the second half of the year. And with ad spend weighted more heavily to the back half of the year, that's great news for investors in Facebook, Alphabet, and Twitter.