Please ensure Javascript is enabled for purposes of website accessibility
Log In Help Join The Motley Fool
Free Article Join Over 1 Million Premium Members And Get More In-Depth Stock Guidance and Research
By James Brumley – Apr 1, 2020 at 7:59AM

Too many gig workers didn't have a safety net in place when they needed it most, setting the stage for more protection in the future.

In some regards, it's a bit premature to talk about what life will be like after the coronavirus outbreak finally abates. After all, it's still growing on a global basis. First things first.

The reality of the matter is, however, it's not too soon to think about these things. The market tends to be predictive rather than reactive, meaning the stocks of companies that will snap out of the COVID-19 funk before others could begin their rebounds before the contagion is completely in the rearview mirror.

The world's commerce landscape will emerge at least a little bit different, of course. If nothing else, employees and employers will take sanitation a little more seriously. But, perhaps the biggest shakeup stemming from the coronavirus wakeup call is the use of contracted workers that companies like Amazon (AMZN -3.01%) and Uber (UBER -2.66%) have come to rely on. The federal government's recent $2 trillion stimulus package bailed them out too, but from a legal and technical perspective, they shouldn't have needed to. Those contracted or "gig" workers caught a break.

It's unlikely they or the government want to put themselves in the same spot again. 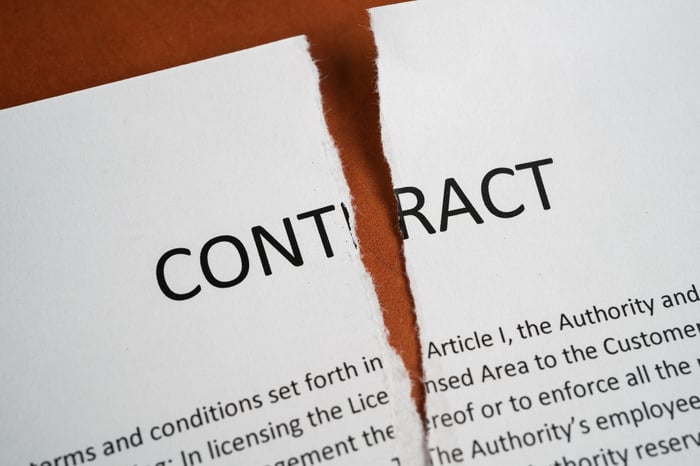 That's a lot of people

It's hardly a new debate. But it's a debate that's come to a head in just the past year. Are Uber drivers effectively employees, even if they're contractors on paper? Should the more-than-100,000 contractors and temp workers utilized by Alphabet be classified as employees if they're expected to do the same kind of work in the same place as employees? Historically the answer has been no. Historically though, one-third of the United States workforce hasn't been considered a gig worker.

Take that number with a big grain of salt, though. Nobody seems to know the exact proportion of the working population considered contractors. Gig Economy Data's aggregated numbers put the number somewhere between 25% and 30%, though the Government Accountability Office analysis of General Social Survey suggests the number is closer to 40% when counting part-time side gigs. At the other end of the spectrum, the Bureau of Labor Statistics says only about 1/10th of U.S. contractors rely on contract work as their primary source of income.

Regardless, that's still millions of people being subject to the whims of their effective employer, working without the safety net of unemployment insurance benefits.

Companies broadly explain how the use of contractors reflects the ever-changing work environment. Such arrangements give them the flexibility they need. And, there may be some truth in the idea. There's certainly an incentive for a company to promote these work relationships, however, when such an arrangement offloads costs like payroll taxes, health benefits, and vacation pay to the worker.

Bookkeeping service Pilot estimates that retaining an actual employee can cost around one third more than a contractor paid at the same base compensation rate -- a difference ultimately offset at the worker's expense. For drivers of ride-hailing services like Uber and Lyft (LYFT -4.76%), expenses like gas and auto maintenance make the gig relationship even less rewarding.

The fallout of these business relationships was taking shape even before the spread of COVID-19 threatened gig workers' paychecks. Amazon, for instance, has been named in multiple lawsuits related to the matter. In one, the e-commerce giant is accused of knowingly and willfully pressuring a contracted driver to exceed that driver's allotted driving hours for any given day, leading to a crash. Another claims a contracted delivery van driver failed to yield as driving laws would require, putting a motorcycle rider in the hospital. Though Amazon contracted the company to do deliveries, the big blue Amazon logo on the side of the delivery van might make it difficult for a judge and jury to distinguish a meaningful difference.

And it's not just Amazon in the crosshairs. California recently enacted legislation that dramatically narrows what constitutes a true contractor, requiring these workers to "perform tasks that are outside the company's core business." It's a ruling that hits companies like Uber and GrubHub (GRUB) where it hurts the most.

Separately, last week New York State's appellate court effectively ruled that workers given assignments through an app are indeed employees, and therefore should be offered traditional employee benefits. The company in question was courier service Postmates, but once again, technology names like Uber, Lyft, and GrubHub are implicated.

That was also right around the same time the federal government felt compelled enough to explicitly make contract and gig workers eligible to receive their share of the $2 trillion set aside as stimulus in the CARES Act that will (hopefully) abate some of the economic damage inflicted by the coronavirus shutdown. Before gig work became relatively common, it's arguable such a provision wouldn't have been added.

Where to go from here?

It's that last data nugget that may be the proverbial nail in the coffin for contract work as we know it.

If the federal government must throw the financial lifeline to these workers because their "employer" can't do so when the economy is battered, then these organizations should arguably be contributing to unemployment insurance programs before black swan events like the COVID-19 contagion materialize. Don't be surprised to see the tide turn in this direction going forward, supported by lawmakers, workers, and newly sympathetic consumers.

Like many global economic disasters, including the subprime mortgage meltdown, when they absolutely have to, regulators and lawmakers will do their best to avoid a repeat of a particular mistake.

What the gig economy landscape will look like a year from now still isn't clear, of course. But given the legal wheels that were spinning even before the coronavirus outbreak changed everything, look for such companies' labor costs to rise, and prices to rise accordingly.

Also, don't be surprised if it means fewer of these jobs remain available, though more of these remaining (true) employees will at least enjoy basic benefits.

3 Moneymaking Skills to Learn in 2020